America has millions of pounds of frozen meat and produce in cold storage. As tariffs threaten to curb international trade, those coffers are about to get a lot more crowded. Here's a look at what they hold right now. 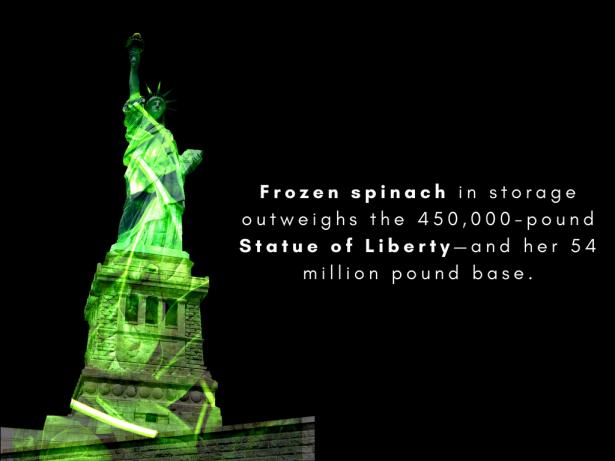 Frozen spinach in storage outweighs the Statue of Liberty, including the base,New Food Economy

Last month, America’s vast network of refrigerated warehouses held enough frozen whole turkeys to feed every single family in the country on Thanksgiving. At the same time, the country’s public and privately owned freezers had 27 million pounds of raspberries socked away for a rainy day. We also had more than billion pounds of frozen juice concentrate in storage across the nation, and an additional billion pounds of frozen blueberries. That’s according to the United States Department of Agriculture’s cold storage report, released every month from the National Agricultural Statistics Service.

During a normal month, the cold storage report provides a fascinating snapshot into America’s pantry. In May, for instance, 60,215,000 pounds of shelled pecans languished in giant refrigerators across the nation. That’s the highest number for the month of May since record-keeping began in 1970. If those pecans were redistributed today, 120 million cooks could use them to make pecan pies—and if those pies were each cut into eight slices, everyone in the U.S. could have almost three.

Would our rapidly escalating trade war with Mexico and China, some wonks have wondered, result in huge volumes of unsold meat in American coffers?

That outcome has seemed likely, as Mexico doubled its tariff on U.S. pork imports to 20 percent on June 5th, and China raised the 25 percent tariff it set in April to 62 percent, effective July 6, Forbes reports. As a result, experts were predicting this month’s cold storage report would show about 2.5 billion pounds of meat caught in the chilly, transitional spaces between the farm and grocery store. The Wall Street Journal talked to storage facility staff who said they were nearing capacity and processors who said they were slowing production as a result of the economic shift.

Now, the numbers released by the National Agricultural Statistics Service (NASS) show that meat in U.S. cold storage in fact slightly surpassed the predicted 2.5 billion pound threshold in June. This glut of unsold inventory isn’t exactly surprising—it’s not just steaks and ground beef that have been impacted by the tariffs, after all. As Reuters reported earlier this month, China had been buying nine out of ten pig byproducts (including ears, hearts, tongues, stomachs and feet) produced in the U.S. before the tariffs—and for prices higher than those items fetch in the pet food and rendering industries. After the tariffs kicked in, U.S. shipments of pork byproducts fell by about a third in April and May combined. The loss of the Chinese offal market alone could mean an $860 million loss for the U.S. pork industry.

But even though American cold storage now has enough meat squirreled away to feed every single person in the world a quarter-pounder of something, the current embarrassment of briskets is nowhere near record-breaking. We’ve faced these kinds of backlogs before.

The country’s stockpile of red meat reached its all-time high for the month of June in 1919, the same year a storage tank of molasses exploded in Boston, sending an ooze through the streets that killed 21 people and injured 150.

And poultry reached its June peak in 2002, the same month Americans tuned into both “The Wire” and “American Idol” for the first time. Also that month, Vice President Dick Cheney served as Acting President for two and a half hours while then-president George W. Bush had a colonoscopy.

June 2018 did break some records, though. We now have more total chicken stockpiled than in any other June since record-keeping began, and within that category drumsticks are at an all-time high. Veal reached a peak last month too, as did onion rings.

If the tariffs continue to impact purchasing, a dearth of warehouse space may mean lower prices for domestic consumers. Here’s to a drumstick in every pot.

Claire Brown is a staff writer for The New Food Economy focusing on food policy and the environment. Her reporting has won awards from the Newswomen’s Club of New York and the New York Press Club. She is based in Brooklyn. She can be reached via email at claire.brown@newfoodeconomy.org or on Twitter at @hclaire_brown.