Police assaulted union members before arresting the president and general secretary of the Zimbabwe Congress of Trade Unions. Unionists have accused current President Mnangagwa of trying to implement neoliberal policies in favour of big business. 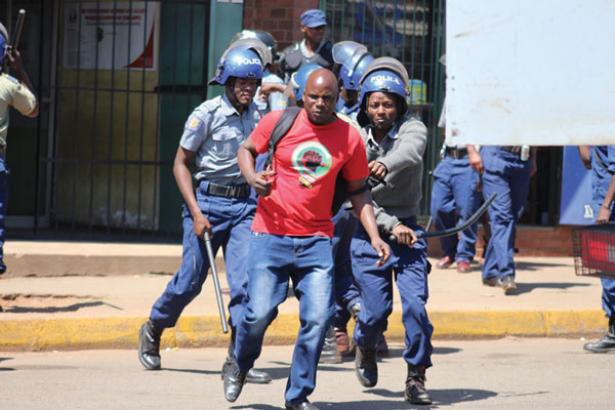 Riot police manhandle a ZCTU member outside the organisation’s offices in downtown Harare ,

Police arrested hundreds of trade unionists and activists across Zimbabwe on Thursday just ahead of a planned protest against the country’s rapidly declining economic situation and rising prices. Zimbabwe Lawyers for Human Rights spokesperson Kumbirai Mafunda told AFP that the police arrested Zimbabwe Congress of Trade Unions (ZCTU) members in the cities of Harare, Mutare and Masvingo. The President of ZCTU, Peter Mutasa, was among those arrested, as was ZCTU general secretary Japhet Moyo.

The International Trade Union Confederation (ITUC) condemned the arrest and beating of the two trade union leaders, along with 33 other trade unionists, calling for their immediate release. In a statement, Sharon Burrow, ITUC general secretary, while demanding that the unionists be released, asked for those guilty of assaulting them to be punished according to the law. She said the behaviour of the police under the current government of President Mnangagwa was similar to that of the brutal regime of former President Robert Mugabe.

The ZCTU had planned the national strike against the measures, including a newly introduced 2% tax on electronic transactions. The protesters also planned to draw attention to the daily shortages of essentials such as bread, fuel, medicines etc, according to a report by News24. Speaking to journalists just before his arrest, Mutasa, said, “We are demonstrating peacefully against hardships. We are here to make the authorities know that Zimbabweans are suffering.”

The trade unions went on with their plan despite  a ban on public gatherings that was imposed by the police in the capital, citing a cholera outbreak. An exceptionally large number of policemen were patrolling the streets, armed with truncheons, guns and teargas canisters, according to the news website Timeslive. Water cannon trucks were also seen parked on some streets. Newsday reported that policemen in groups were seen beating up ZCTU members in the offices of the trade union in Harare, just before they arrested the president and general secretary of ZCTU. 20 labour activists were also arrested in the city of Mutare, including ZCTU regional manager Tenson Muchefa and Zimbabwe Union of Journalists (ZUJ) vice-chairperson Dickson Chaeruka. In Masvingo, 12 activists were arrested for not obeying the ban orders.

Later on Thursday, a Harare magistrate upheld the police ban on protests and demonstrations. In his ruling, magistrate Lanzani Ncube cited the cholera outbreak as one of the reasons. 50 people have died and 10,000 have taken ill as a result of the spread of the disease. The magistrate also remarked that the trade unions’ protest could potentially turn violent as discontent was growing among the common people in Zimbabwe.

Local media has reported extremely long queues at petrol stations and shops struggling to fill up their shelves with fresh stocks of goods. The value of the local ‘bond note’ currency has also been falling drastically, raising fears of hyperinflation in the country. Many trade unionists and activists have accused the current President Emmerson Mnangagwa of supporting and trying to implement neoliberal policies in favour of big business. MDC (Movement for Democratic Change) leader Nelson Chamisa warned that the country risked sliding back into the era of former President Robert Mugabe, which was infamous for brutal repression and massive corruption. President Emmerson Mnangagwa assumed power last year after Mugabe was ousted by the Zimbabwean military in a coup. He has vowed to ensure the availability of essential goods.