Humanity Has Wiped Out 60% of Animal Populations Since 1970, Report Finds

Humanity has wiped out 60% of mammals, birds, fish and reptiles since 1970, the world’s foremost experts warn that the annihilation of wildlife is now an emergency that threatens the survival of civilisation. 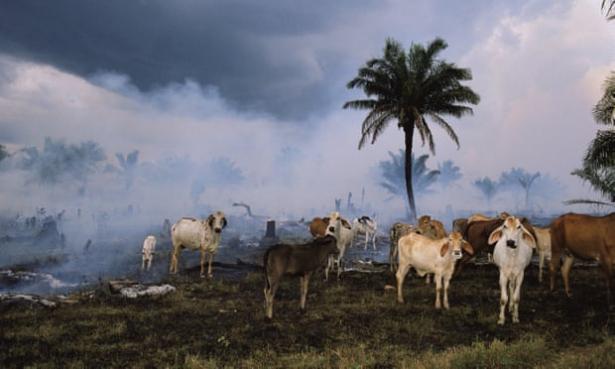 The new estimate of the massacre of wildlife is made in a major report produced by WWF and involving 59 scientists from across the globe. It finds that the vast and growing consumption of food and resources by the global population is destroying the web of life, billions of years in the making, upon which human society ultimately depends for clean air, water and everything else.

“We are sleepwalking towards the edge of a cliff” said Mike Barrett, executive director of science and conservation at WWF. “If there was a 60% decline in the human population, that would be equivalent to emptying North America, South America, Africa, Europe, China and Oceania. That is the scale of what we have done.”

“This is far more than just being about losing the wonders of nature, desperately sad though that is,” he said. “This is actually now jeopardising the future of people. Nature is not a ‘nice to have’ – it is our life-support system.” 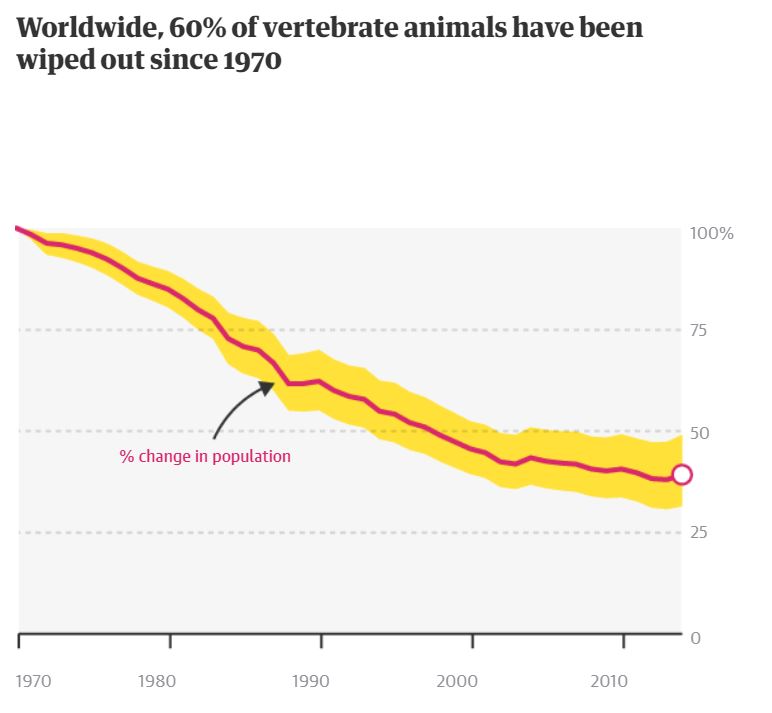 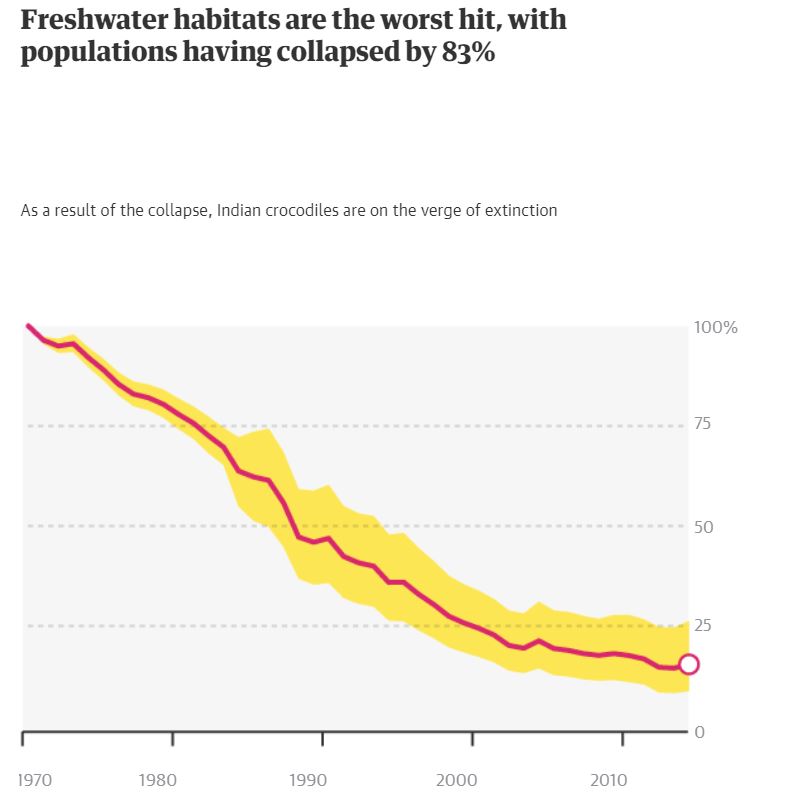 “We are rapidly running out of time,” said Prof Johan Rockström, a global sustainability expert at the Potsdam Institute for Climate Impact Research in Germany. “Only by addressing both ecosystems and climate do we stand a chance of safeguarding a stable planet for humanity’s future on Earth.”

Many scientists believe the world has begun a sixth mass extinction, the first to be caused by a species – Homo sapiens. Other recent analyses have revealed that humankind has destroyed 83% of all mammals and half of plants since the dawn of civilisation and that, even if the destruction were to end now, it would take 5-7 million years for the natural world to recover.

The Living Planet Index, produced for WWF by the Zoological Society of London, uses data on 16,704 populations of mammals, birds, fish, reptiles and amphibians, representing more than 4,000 species, to track the decline of wildlife. Between 1970 and 2014, the latest data available, populations fell by an average of 60%. Four years ago, the decline was 52%. The “shocking truth”, said Barrett, is that the wildlife crash is continuing unabated.

Wildlife and the ecosystems are vital to human life, said Prof Bob Watson, one of the world’s most eminent environmental scientists and currently chair of an intergovernmental panel on biodiversity that said in March that the destruction of nature is as dangerous as climate change.

“Nature contributes to human wellbeing culturally and spiritually, as well as through the critical production of food, clean water, and energy, and through regulating the Earth’s climate, pollution, pollination and floods,” he said. “The Living Planet report clearly demonstrates that human activities are destroying nature at an unacceptable rate, threatening the wellbeing of current and future generations.”

The biggest cause of wildlife losses is the destruction of natural habitats, much of it to create farmland. Three-quarters of all land on Earth is now significantly affected by human activities. Killing for food is the next biggest cause – 300 mammal species are being eaten into extinction – while the oceans are massively overfished, with more than half now being industrially fished.

Chemical pollution is also significant: half the world’s killer whale populations are now doomed to die from PCB contamination. Global trade introduces invasive species and disease, with amphibians decimated by a fungal disease thought to be spread by the pet trade.

The worst affected region is South and Central America, which has seen an 89% drop in vertebrate populations, largely driven by the felling of vast areas of wildlife-rich forest. In the tropical savannah called cerrado, an area the size of Greater London is cleared every two months, said Barrett.

“It is a classic example of where the disappearance is the result of our own consumption, because the deforestation is being driven by ever expanding agriculture producing soy, which is being exported to countries including the UK to feed pigs and chickens,” he said. The UK itself has lost much of its wildlife, ranking 189th for biodiversity loss out of 218 nations in 2016.

The habitats suffering the greatest damage are rivers and lakes, where wildlife populations have fallen 83%, due to the enormous thirst of agriculture and the large number of dams. “Again there is this direct link between the food system and the depletion of wildlife,” said Barrett. Eating less meat is an essential part of reversing losses, he said.

The Living Planet Index has been criticised as being too broad a measure of wildlife losses and smoothing over crucial details. But all indicators, from extinction rates to intactness of ecosystems, show colossal losses. “They all tell you the same story,” said Barrett.

Conservation efforts can work, with tiger numbers having risen 20% in India in six years as habitat is protected. Giant pandas in China and otters in the UKhave also been doing well.

But Marco Lambertini, director general of WWF International, said the fundamental issue was consumption: “We can no longer ignore the impact of current unsustainable production models and wasteful lifestyles.”

The world’s nations are working towards a crunch meeting of the UN’s Convention on Biological Diversity in 2020, when new commitments for the protection of nature will be made. “We need a new global deal for nature and people and we have this narrow window of less than two years to get it,” said Barrett. “This really is the last chance. We have to get it right this time.”

Tanya Steele, chief executive at WWF, said: “We are the first generation to know we are destroying our planet and the last one that can do anything about it.”