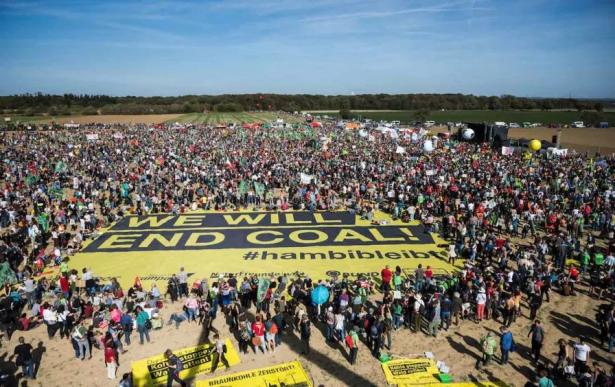 Are we doomed? It’s the most common thing people ask me when they learn that I study climate politics. Fair enough. The science is grim, as the UN Intergovernmental Panel on Climate Change (IPCC) has just reminded us with a report on how hard it will be to keep average global warming to 1.5 degrees Celsius. But it’s the wrong question. Yes, the path we’re on is ruinous. It’s just as true that other, plausible pathways are not. That’s the real, widely ignored, and surprisingly detailed message of the IPCC report. We’re only doomed if we change nothing. The IPCC report makes it clear that if we make the political choice of bankrupting the fossil-fuel industry and sharing the burden of transition fairly, most humans can live in a world better than the one we have now.

And yet doom is what’s being amplified by seemingly every major newspaper and magazine, and the mainstream media more broadly. A standout example was David Wallace-Wells’s hot take on the IPCC report for New York magazine, charmingly titled, “UN Says Climate Genocide Is Coming. It’s Actually Worse Than That.” There’s a lot to say about the emotional texture of this kind of reporting. But the deeper problem is how this coverage fails to capture climate breakdown’s core cause-and-effect dynamic, thus missing how much scope for action there still is

Reporting on the IPCC, and climate change more broadly, is unbalanced. It’s fixated on the predictions of climate science and the opinions of climate scientists, with cursory gestures to the social, economic, and political causes of the problem. Yet analysis of these causes is as important to climate scholarship as modeling ice-sheet dynamics and sea-level rise. Reductionist climate reporting misses this. Many references to policy are framed in terms of carbon pricing. This endorses the prevailing contempt in establishment circles for people’s capacity to govern themselves beyond the restrictions of market rule. Meanwhile, the IPCC report is overflowing with analyses showing that we can avoid runaway climate change, improve most people’s lives, and prioritize equality through a broad set of interventions.

It remains physically possible to keep global warming at a relatively safe 1.5 degrees Celsius, and certainly a less safe—but not apocalyptic—2 degrees. This would require dramatic changes in economic policy and doubling down on the powers of public planning. Taxing carbon is essential, but is just one of many complementary tools. Using “command and control” regulatory methods, the Clean Air Act cleaned up much of the United States years before “market mechanisms” became famous. Indeed, “command and control” is the centerpiece of the best climate policies in the United States. Take California: There, the state’s regulatory mandates forcing utilities to source more renewable energy are the main reason emissions have gone down. In contrast, the market-mechanism piece of California’s climate policy, a “cap and trade” program, has failed to slash emissions; it may even have facilitated a moderate increase in carbon pollution in the state’s poorest neighborhoods.

Meanwhile, worldwide, a thumping clean-energy revolution is the story of markets fostered by activist government policy. Government research labs and grants, regulation of utilities, subsidies for homeowners to install solar panels, cheap loans for clean energy, and electric-car manufacture are yielding a boom in clean energy. In 2017, global wind energy capacity grew by 10 percent, and solar photovoltaic capacity by 32 percent.

Change is also coming from below. When German environmentalists pushed their government to subsidize clean energy, there was an explosion of community wind farms in their country, and solar-panel manufacturing in China to meet German demand. In the United States, the Sierra Club and its allies have managed to get hundreds of coal plants shut down early, or canceled before they were built. More direct action and harsher government policies will be needed to keep more fossil fuels in the ground. Otherwise, clean energy will merely supplement fossil fuels, rather than replace them.

Despite the framing of most news coverage about it, the latest IPCC report is innovative precisely because it uses new social science to highlight the climate implications of a range of political choices. But you have to read beyond the “Summary for Policymakers” to see it. The IPCC has embraced an approach developed by climate scholars called “Shared Socioeconomic Pathways,” or SSPs. Prior to the latest report, the IPCC projected future scenarios based on skeletal, technocratic models of energy, land use, and climate. They represented climate politics as being like a dashboard with a few dials that engineers could turn—a little more renewable energy here, a touch less deforestation there. In contrast, the SSPs imagine different possible climate futures in terms of realistic clusters of policy decisions, which in turn affect emissions, land use, and how the impacts of extreme weather are felt.

In the current report, there are five SSPs, which illustrate the huge differences between possible paths forward. Each pathway represents a different set of approaches for slashing emissions and coping with climate change. The first three strike me as most plausible. SSP 1, called “Sustainability,” imagines a world where policies increasingly favor sustainability, equity, education, and health care (which all reduces population growth), technological progress, and energy efficiency. This pathway also includes major cuts to fossil-fuel investment, which combined with public policy drive a hard, fast shift to clean energy and increased efficiency.

Compared to this rosy scenario, SSP 3, “Regional rivalry,” is terrifying: It projects low technological progress, few advances in health and education, high energy use, low international cooperation, and a booming population. Thanks to Donald Trump and Brazil’s Jair Bolsonaro, it’s depressingly easy to imagine this world, though we’re not there yet. SSP 2, a “middle of the road” scenario, feels closest to our current reality; it projects only moderate amounts of technological progress, cooperation, and social investment. While SSP 2’s climate implications are also scary—limiting warming to 2 degrees Celsius on this path is hard—the scenario is flexible enough for a turn to 1 or 3, better or worse. SSP 4, “Inequality,” and SSP 5, “Fossil-fuelled development” explore other unsettling options. The next report will have nine of these.

The scenarios do a nice job of tying together disparate social science about drivers of greenhouse-gas emissions beyond crude energy accounting. For instance, women’s improved education, job prospects, and smaller families in SSP 1 are a key reason climate models find that it is the easiest path to limiting warming to 1.5 degrees. Keywan Riahi, one of the architects of this new modeling approach, told me that some of the numbers glossed in the IPCC report’s “Summary for Policymakers” miss crucial takeaways, like the social-impact analysis buried deeper in the report’s third chapter. For instance, at two degrees Celsius warming, in an SSP 3 world, between 750 million and 1.2 billion people would be severely exposed to climate-linked extreme weather, according to a 2018 study discussed in the IPCC report. In contrast, the IPCC reports, under the SSP 1 scenario, well under 100 million people would be hard hit by extreme weather at the same level of warming.

This is a huge finding! The very same cluster of priorities in SSP 1—technology, equality, global cooperation—that do the best job of slashing carbon emissions could also protect about 1 billion people from the climate impacts of 2 degrees Celsius warming. If your only climate policy is carbon pricing, then there’s of course a trade-off between equity and decarbonization. Jacking up gas and electricity prices hurts the poor. But expand your political and policy imagination, and get out your calculator, and you find something else. Lifting hundreds of millions of people out of poverty through feminist public policies, reducing the consumption of the affluent, and pursuing innovation make lives better, safer, and more environmentally friendly. The report is jam-packed with evidence for this.

But you won’t find any of this scholarship, which is the very core of the IPCC’s findings, in the melancholy, fatalist reporting of the leading US press outlets. (David Roberts at Vox, who has picked up on the SSPs, is the main exception.) That coverage devoted almost all of its space—and considerable writing talent—to making concrete and visceral potentially terrible outcomes. And almost all discussion of climate change’s social causes is linked to one number—how many dollars should we charge per ton of carbon. Meanwhile, the IPCC is screaming, page after page: For God’s sake, pay attention to the damn social system and all the ways it can change! (I’m paraphrasing.) Why not make that concrete and visceral?

Ah, but SSP 1 is just a fantasy, right? At best, something they’re trying in Copenhagen? Actually, no. From the US Department of Energy’s battery labs to Washington State’s climate politics battles to the solar rooftops of Los Angeles’s Boyle Heights, fascinating, passionate people are working their asses off to do the things that these models seek to summarize.

The main mechanisms of SSP 1 are on the ballot in Washington State right now, in the form of a carbon-fee and clean-energy-investment proposal. California also spends a third of its revenue from cap-and-trade specifically on climate-friendly investments in poor, racialized, and polluted communities. In more familiar terms, these kinds of “Green New Deal” policies, increasingly linked to a job-guarantee proposal, are being energetically pursued by nearly all the insurgent young Democrats of 2018, most notably Alexandria Ocasio-Cortez. At the federal level, Bernie Sanders campaigned on something similar in 2016. For 2020, all signs point to support for Green New Deal–style policies by most of the leading progressive Democratic presidential contenders.

If one of these beats Trump, it would utterly transform global climate politics. Suddenly, the world’s three most powerful—and polluting—economic blocs, the United States, China, and the European Union, which together make up well over half the global economy, could all be committed to huge climate investment. This has never happened before. How the US left integrates climate into its agenda in the next couple of years will shape global climate politics for decades. Meaning there’s never been a better time to align our fights for racial justice, economic equality, decent public services, and a safe climate.

The SSPs themselves aren’t framed in terms of conventional political categories, like free-market fundamentalism, social democracy, or eco-socialism. That’s smart. People can draw their own political conclusions. Same goes for hope or pessimism—that’s a mood people can choose on their own. My question is, based on what? Potentially awful climate outcomes, or the social action that could prevent those? Why aren’t we dwelling on the ways that nascent SSP 1 policy-making could expand into a more encompassing global dynamic?

Is an imagined future of equality and sustainability so utterly beyond reach? To most of the mainstream media, just half of the climate equation feels real: its potentially catastrophic effects. This story, artfully told over and over, is resonating with millions. People are terrified. But as the scientists themselves insist, the real action lies on the causal end of the equation: human struggles against old powers that are happening right now. These struggles are actually going pretty well. Call it invention, call it care, call it politics—climate change is the story of people fighting over how to live.

Daniel Aldana Cohen is an assistant professor of sociology at the University of Pennsylvania, where he directs the Socio-Spatial Climate Collaborative, or (SC)2.