When Media Say ‘Working Class,’ They Don’t Necessarily Mean Workers — but They Do Mean White

Since the 2016 elections, corporate media narratives about US politics have fixated on the “white working class” as a pivotal demographic, presented as a hardscrabble assortment of disaffected outsiders. 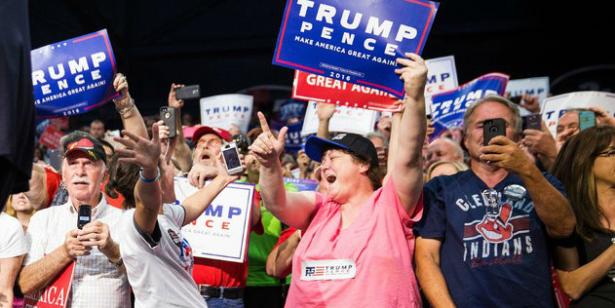 Piece after piece has been published in establishment outlets attempting to decipher the motivations of this racialized socio-economic group, depicted as fighting from the Heartland against “cultural elites” on both coasts.

Numerous articles on the 2018 midterm elections furthered this narrative. The New York Times (10/18/18) spoke of white workers’ place in the Democratic electoral strategy:

Mr. Trump’s success among white working-class voters spanned much of the Midwest, powering victories in Michigan, Wisconsin and Ohio…. Here in Iowa and elsewhere, [Democrats] are also making appeals to small-town voters who went for Mr. Trump. 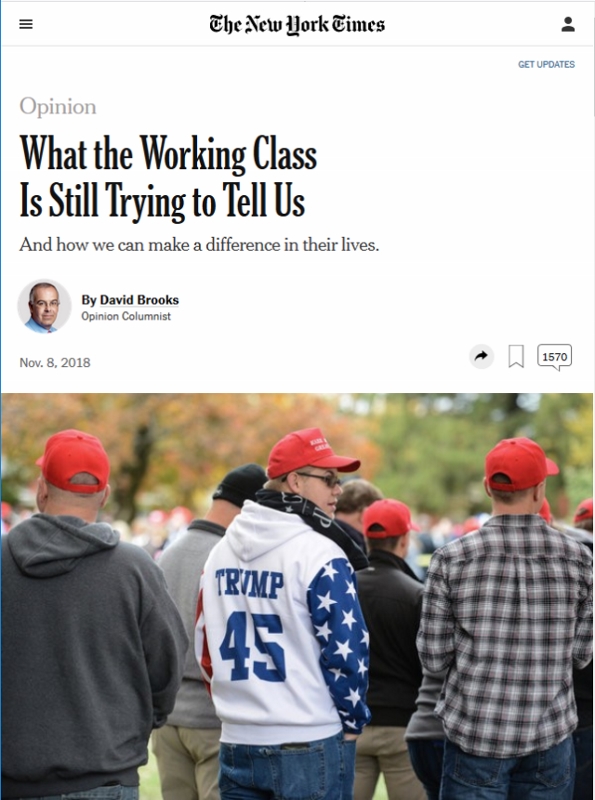 The Washington Post (10/13/18) reported that Kentucky congressional candidate Amy McGrath hoped that the endorsement of Joe Biden would bolster her chances with this demographic:

Biden is the Democrat who worries the president and his team the most because they fear he could cut into Trump’s working-class white support in several swing states.

But the biggest explanation for the shifting numbers…is that the portions of the white working class hostile to Trump appear somewhat more likely to vote next month than those who support him.

If you’ve seen a piece on the impact of the working class on the midterm elections, it has most likely dealt specifically with working whites. But the media focus distorts the composition of this class, racially and otherwise. As Sarah Jaffe points out in the New Republic (8/22/18), “Only around 11 percent of the working class are white men in industrial jobs.” Americans who make their living by selling their labor (mostly in the service industry) are in fact disproportionately people of color, who are projected by the Economic Policy Institute (6/9/16) to constitute an outright majority of the working class by 2032.

This misrepresentation of working-class whiteness extends to discussion of the voting habits of organized labor, as in a Washington Post piece (10/10/18) speculating that Sen. Sherrod Brown’s pro-union rhetoric in Ohio might help Democrats “reverse the flight of the white working class to President Trump.” Though the typical union worker is often depicted as a gruff white man nearing his 50s, union membership is more common among African-American workers than whites, at 13.0 percent vs. 10.5 percent.

Despite the significant number of people of color in the working class, non-white members of this class are rarely talked about as such. While use of the phrase “white working class” has been ubiquitous in political journalism in the lead-up to the 2018 midterm elections, the “black working class” is discussed much less often. While the New York Times will occasionally put out a piece with explicit analysis of working people of color—including one op-ed by Tamara Winfrey-Harris (6/16/18)and another by Alexis Okeowo (6/2/18)—they are few and far between compared to the multitude of pieces published on their white counterparts.

This promotes a homogenous image of the working class as sweaty, middle-aged white men in hard hats, with MAGA bumper stickers on their pick-up trucks and a fear of social change in their hearts. This depiction erases the multitude of working people who do not meet this stereotype, and ignores the fact that the working class has far more people of color and more women than the professional and ownership classes.

Aside from misrepresenting workers as predominantly white, media outlets often use the term “white working class” to refer to white voters who aren’t even working class by any common-sense definition. A recurrent media proxy for this demographic group is Americans who haven’t attended college, which the New York Times (10/10/18) has treated as synonymous: 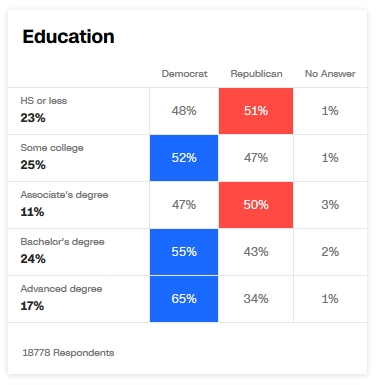 While there is undeniably a relation between class and access to education, defining class only along this line replaces an economic identity with a cultural one. By this definition, a suburban millionaire could be counted as “working class” as a result of joining Dad’s company at 18 instead of going off to school. This fuzziness helps cast the  “white working class” as the president’s reliable base: Many of them are not workers in any recognizable sense.

(It also helps explain why exit polls diverge on education and income: 55 percent of respondents with college degrees–and 65 percent with advanced degrees–voted for Democratic House candidates in 2018, whereas 51 percent of people making $100,000-$200,000 a year, and 52 percent making over $200,000, voted for Republicans.) 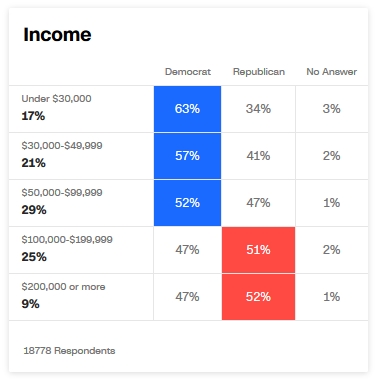 This flawed conception of the “white working class” (not necessarily working, but definitely white) is brought to spurious life in the reporting of New York Post and Washington Examiner columnist Salena Zito. In a piece for the Washington Examiner (11/26/17) on the midterm implications of the narrow reelection of Kathy Dahlkemper, county executive of Erie County, Pennsylvania, Zito writes of the difficulty of Democratic candidates winning “in working-class regions” (read: whiteworking-class regions) where, she says, such workers are

She explains that despite an incumbency advantage and a large number of registered Democrats, the sitting executive came very close to being voted out. Zito’s solution is to elect more conservative Democrats—“Democrats need the Kathy Dahlkempers of their party to win all kinds of races up and down the ballot”—despite starting her piece by pointing out that the incumbent just barely won.

This depiction of the working class as synonymous with small-town whites in the Rust Belt is politically convenient for Zito, who writes primarily for right-wing publications and has been a featured speaker at CPAC, the annual convention of the American Conservative Union. In addition to being downright inaccurate, her misleading depiction of “working-class” voters bears the implication that the only way for Democrats to win them is to lurch right on social issues, rather than to move left on economics and address their material concerns.

Media narratives of the political landscape leading to the 2018 midterm elections constructed an image of the “working class” in popular culture that actually depicts the white, comfortable, culturally conservative small-business class. This stands in the way of building a politics which simultaneously addresses issues of race, class and gender—which, as has previously been argued by FAIR (6/23/17), will be essential in building a progressive alternative.

In the current environment, it is imperative to remain wary of themes in media which whitewash the working class, render working people of color invisible and encourage the perception that racial and economic justice are at odds.

[John McCullough is an intern at FAIR and a writer based in NYC. He is currently finishing his undergraduate degree at Fordham University. You can follow him on Twitter @eggsandmarxism.]