Only by firmly linking democracy and civil liberties to concrete programs of social and economic justice can working-class unity be built. 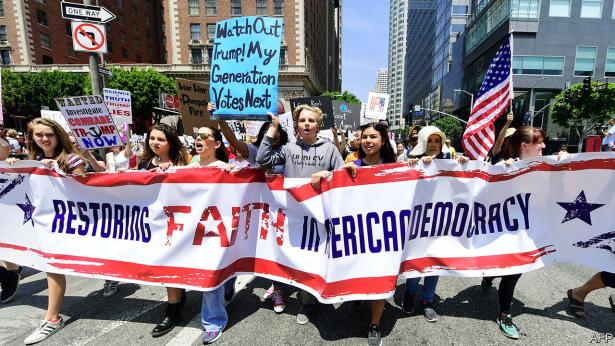 The mid-term elections have resulted in gains for those leading the resistance to Trump. An unprecedented 67 members of Democratic Socialists of America were elected to municipal and state legislative offices, while two — Alexandria Ocasio-Cortez, from the Bronx, and Rashida Tlaib from Detroit — were elected to Congress. In addition to Tlaib (of Palestinian heritage), another Muslim woman, Ilhan Omar, was elected to Congress, representing Minneapolis. A refugee from Somalia, Omar was one of 68 candidates to win office endorsed by Our Revolution, the progressive organization that emerged out of Bernie Sanders campaign. The Working Families Party played a leading role in the victorious Congressional campaigns by Jahana Hayes from Connecticut and Ayanna Pressley from Massachusetts; the first two black women ever to represent New England, and Deb Haaland of New Mexico, who will become one of the first Native American women, to serve in the House of Representatives. The WFP claimed victory too in defeating anti-union governors in Wisconsin and Michigan. Common to all left/progressive campaigns is that, although running as Democrats, they funded their work through small donor (rather than big business) contributions and based on grassroots, volunteer activists (rather than high-paid consultants). Significantly, this was the approach taken by the AFL-CIO. More than 700 union members were elected to office in opposition to Republican Party candidates and pro-corporate Democratic Party policies.

These results were part of a broader wave of support for Democrats as a repudiation of Donald Trump. Yet that repudiation did not go far enough; Trump’s appeals to racism and authoritarianism also registered success. Most Republican candidates for office ran campaigns based on undisguised appeals to fear and hatred, depicting migrants fleeing violence and poverty as themselves violent, disease bearing-menaces that threatened US stability and security. Voter suppression efforts – especially in Georgia and Florida — used tactics developed and refined in the South by those who preferred to see black Americans dead than vote. That suppression aimed not only at keeping blacks from the polls, but equally to encourage whites to vote to prevent “them” from taking over. Although millions reject such appeals, millions fall prey to it; Republican gains in the US Senate attest to that reality. The US public – working people throughout the country – are deeply divided. Every action by the right-wing now in power aims to deepen that divide.

The Democratic Party is itself divided. Neo-liberal Democrats are pursuing a strategy resting on the assumption that Trump will defeat himself; that his illegal financial actions and unconstitutional measures will eventually discredit him or force him to resign. They want a return to the stability that existed before the 2007-8 financial crisis. Such Democrats propose only those ameliorative economic measures that do not challenge pro-big business public policy. Unity with mainstream Democrats is needed to preserve threatened civil liberties and to counteract the climate of hate that has already resulted in right-wing violence but such unity cannot be based on acceptance of the limitations of Democratic Party leadership; if that path is pursued, the ultra-right will retain their support and power.

Unity, in other words, cannot turn into acquiescence to a corporate agenda. Instead, a program of redistributive economics – taxing the wealthy, guaranteeing jobs, union rights and higher pay, providing universal health and retirement insurance, making quality public education available to all, ending the housing crisis, implementing programs to overcome discrimination are necessary. Only by firmly linking democracy and civil liberties to concrete programs of social and economic justice can working-class unity be built. This possibility is reflected in the outcome of numerous referendum votes – in several states and municipalities voters approved expansion of Medicaid, approved increases in the minimum wage, ended a racist system of jury decision making in Louisiana (long a center of Ku Klux Klan power). And in Florida, more than 60% of voters approved a law that ends the disenfranchisement of people who have been in prison – restoring the vote to 1.4 million people. In every one of those referendum, many who voted for social justice also voted for Republican candidates who opposed those measures.

Thus the challenge facing DSA and other newly elected progressives is to build unity with mainstream Democrats (and even willing Republicans) to defend civil liberties while also organizing popular unity against corporate power, whether promoted by Democrats or Republicans. Unity at either level means an uncompromising stance for reproductive justice (referendum votes in two states approved anti-abortion measures), for full legal rights for immigrants and for an end to police violence against blacks. Finally, it means principled opposition to US military and global corporate expansion. In that respect, Ocasio-Cortez’s outspoken denunciation of the devastating impact of colonization on Puerto Rico and Rashida Tlaib’s uncompromising advocacy of Palestinian rights, are positive signs.

Trump’s response to the election has been repression and lies. In a country in which poverty and insecurity are growing, that can only be countered by maintaining the connection between democratic rights and economic justice. The next two years will determine how well the left inside and outside of government builds that linkage.

[Kurt Stand was active in the labor movement for over 20 years including as the elected North American Regional Secretary of the International Union of Food and Allied Workers until 1997.  That year he was arrested and served 15 years in prison on charges of having committed espionage for the GDR, charges he unsuccessfully contested at trial and upon appeal.  Currently he works at a bookstore, is a member of the Washington Metro DSA, is active in Progressive organizations in his community of Cheverly, Maryland, serves as a Portside Labor Moderator and is the facilitator of a Metro DC Labor/Reentry jobs project.]