Butterball's Turkey Hot Line was started in 1981 with 6 operators; today's operators number over 50 and answer 10,000 calls on Thanksgiving. 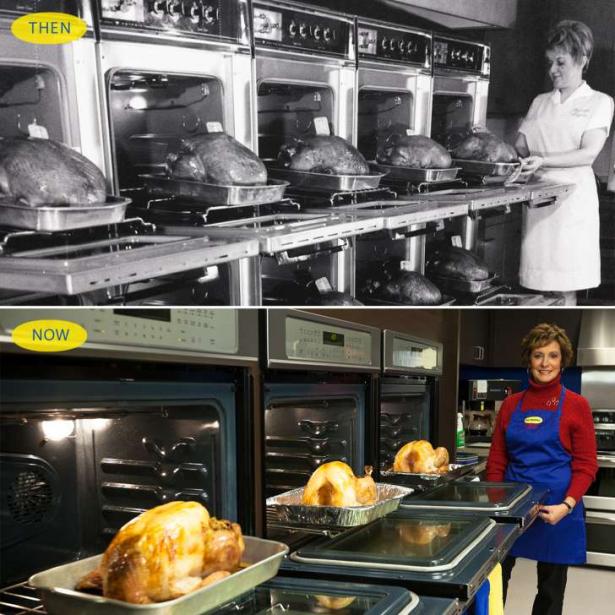 Butterball Hotline Kitchen Then and Now,Butterball

Butterball’s Turkey Talk-Line started small. Their first holiday season in 1981, a team of six home economists answered 11,000 turkey-related questions from cooks across America. Things have grown a great deal since then: More than 50 phone operators now work out of the Butterball office in Naperville, Illinois—about a 30-minute drive from Chicago—and they answer 10,000 calls on Thanksgiving day alone. That’s not to mention all the texts, emails, and instant chat messages they also handle.

We spoke to three talk-line operators to find out what it takes to become a turkey expert and why they give up their own holidays to help others avoid disastrous dinners.

1. THEY NEED AT LEAST A FOUR-YEAR DEGREE IN A FOOD-RELATED FIELD.

The talk-line operators don’t call themselves “experts” for nothing. To be considered for the job, they need to have completed at least four years of a food-related program. Turkey talk-line supervisors Janice Stahl and Carol Miller both have degrees in home economics. Nicole Johnson, a talk-line coordinator, has degrees in nutrition dietetics and public health. There are also lots of registered dieticians on staff, and some of the other employees have worked as chefs or food stylists.

2. CONNECTIONS HELP WHEN IT COMES TO GETTING HIRED.

Positions on the talk-line are never formally advertised—only by word of mouth—so it helps to know someone who works there. Stahl says she found out about the job from her mother-in-law, who worked as a talk-line operator for more than 10 years. “It kind of takes a little bit of a connection to get in,” she says. “It’s a hot little commodity job.” In a similar vein, Miller found out about the job from a neighbor, and Johnson learned about it from a former teacher.

3. THE OPERATORS HAVE STAYING POWER.

Once someone does land a job, they tend to stick around a while. Many of Butterball's turkey experts have worked at the talk-line for over 10 years. "It's not a job where people really leave," Stahl told Patch in 2015. "We may hire one person a year."

During their first three years on the talk-line, all Butterball “freshmen” have to complete a one-day training seminar, dubbed Butterball University, at the start of each season. They’re assigned a specific method of turkey preparation, and spend the day cooking in the Butterball office kitchen. Butterball U attendees have tested out every possible appliance, from deep fryers to charcoal grills to sous vides.

“At the end of the day we’re looking at 10 or 12 turkeys that have been cooked in all these different methods,” Miller says. “Then we compare the appearance of the turkey, we compare time, we compare the juices that are in the bottom of the pan—Is there a lot of juice? Is it brown juice?” That way, “when the phones start ringing or the texts come in, you have actually visualized it," she says.

All of the experts also have to complete “advanced training” each year, which covers Butterball’s products and provides a refresher course on how to operate the phone and computer systems. (The computers are used to keep a record of the type of questions received, which are sometimes discussed in future training sessions.) New this year is a system that allows callers to hang up and have an operator call them back, instead of being put on hold. The wait can be short or long, depending on how many callers they have that day, and how chatty they are. "Sometimes the call will vary from 30 or 45 seconds to 30 to 45 minutes," Johnson says.

5. THEY HEAR ALL KINDS OF CONFESSIONS.

Because the talk-line operators are so sweet, affable, and non-judgmental, many callers feel comfortable telling them all kinds of personal details. “We are kind of like a confession hotline,” Stahl says. “We’ll get the husband on one line and the wife on the other because there’s been a dispute about what temperature the oven should be.”

One year, a new bride called into the hotline in a panic. She was nervous about cooking for her in-laws and couldn’t tell whether the turkey was done. They could barely hear her whispering into the phone, and when they asked her why she was speaking so softly, she replied, “I’m in the hallway closet.”

Another time, a man wanted to propose to his girlfriend by placing a ring inside the turkey, then cooking it. Miller, who took that call, advised him against it. "At the time I was worried about food safety and the romantic moment! Crunching down on a diamond—either big or small—could have been a problem for the bride or whoever found the ring," she explains. “I convinced him it would be just as dramatic if he took the ring, got a piece of ribbon, and tied it on a drumstick and then brought the turkey into the gathering and proposed that way.” This happened in the mid-’80s, and Miller still wonders what happened to them, and whether the woman said yes. “By now they could have kids and grandkids, and I can just imagine grandpa telling that story.”

Some of the talk-line operators have had a few turkey mishaps of their own, and they'll share these personal stories with callers to let them know they’re not alone. “We’re all human. Everybody knows somebody that’s left that little treasure bag in the wishbone cavity of the turkey,” Miller says.

One time, Miller had an extra-large turkey but didn’t have a suitable pan to hold it, so she used a cookie sheet instead. “That was not a good idea because I spent I don’t know how much time bailing [the juices] out of the cookie sheet so that it wouldn’t go out and over the pan and into the oven,” she says. Another time, she “burned the heck out of a turkey” on a charcoal grill.

Stahl has a similar story. Once, after moving into a new home, she bought a turkey before checking to see if the oven worked. It didn’t, as she discovered on Thanksgiving day. So they ordered pizza instead.

7. THEIR CALLERS TRY TO THAW TURKEYS IN SOME PRETTY STRANGE PLACES.

Pools, bathtubs, dishwashers, jacuzzis—all have been used in attempts to thaw turkeys. One dad was bathing his twin kids and decided to put the turkey in the tub with them. Another family was having a large reunion at a hotel, and plopped 10 turkeys into the bathtub to thaw. “Picture the maid coming in and seeing that,” Miller says.

Turkeys have also been stored in some creative places when freezer space is lacking. Operators have heard from callers who left their turkeys in the trunk, only to discover that the weather warmed up the next day and ruined them. In states where it starts snowing in November, it’s not unusual for people to leave their turkeys outside in a snowbank. One year, someone did this and called into the hotline because they wanted to know how to find it. “The Midwest stories are the best,” Stahl says.

8. THEY CAN TELL YOU HOW TO MICROWAVE A TURKEY.

Butterball’s talk-line operators are trained in all methods of turkey preparation, including microwaves. After all, things go wrong and ovens stop functioning, so they need to be capable of guiding callers through the next-best-case scenario. In 2005, they got tons of calls from people living in FEMA trailers after Hurricane Katrina destroyed their homes. The shelters had microwaves but no ovens, and they wanted to know whether they could still cook a proper Thanksgiving meal.

“You can do it, but it’s gotta be about 12 pounds or less,” Stahl says. “You can even stuff it, stick it in the microwave, and we can walk you through all the steps. It works and it actually tastes really good. You wouldn’t know the difference.” The presentation, however, isn’t as nice as a turkey cooked in an oven. “It’s not pretty when it comes out of the microwave. That’s the only thing,” Stahl says.

9. THEY GET ASKED TURKEY-RELATED QUESTIONS EVEN WHEN THEY'RE OFF-DUTY.

While many of the turkey experts proudly wear a jacket with Butterball’s Talk-Line logo on the left side, they also know the risks. Namely, if they’re going to be leaving the house while wearing it, they should ensure they have plenty of time to talk turkey. “If you ask everybody in [Butterball’s office] on Thanksgiving day if they’ve ever been stopped somewhere out of the house with their Butterball jacket on and asked a question, I’m sure they all would say yes,” Miller says. She’s been stopped at the library, at soccer games, at Home Depot, and at the grocery store, so she always has to be on top of her game.

Stahl says she was at the grocery store when “some lady came after me in aisle three.” The woman didn’t know how to cook a turkey or even which aisle carried them, so Stahl sat down with her at a coffee shop inside the store and explained how it’s done—from start to finish. She didn’t mind helping, but conceded, “A grocery store is never where you want to wear a Butterball coat.”

10. THEY UNSUCCESSFULLY PETITIONED FOR A THANKSGIVING TURKEY EMOJI.

Butterball’s turkey experts launched a change.org petition last year to get Unicode, the leading authority on emojis, to introduce a cooked turkey icon. When responding to questions by text, the turkey experts sometimes throw in an emoji to make it more friendly and festive. However, they weren’t satisfied with the live turkey emoji because, as Butterball’s longest-standing talk-line operator Marge Klindera explained in a promotional video, “If your turkey looked like this, even we can’t help you.” Unfortunately, support was somewhat lacking—they got a little over 7500 signatures—and they never received their Thanksgiving emoji. “I think it might take a couple years to get the emoji,” Johnson says.

11. THEY DELAY THEIR OWN THANKSGIVING TO HELP YOU "HOST LIKE A BOSS."

Butterball’s turkey experts are scheduled to work from 6 a.m. to 6 p.m. on Thanksgiving day (and from 8 a.m. to 2 p.m. on Christmas Eve), which means they have no choice but to delay their own holiday celebrations. When it’s time for lunch, they order soup to help soothe their throats, since their voices are often hoarse by the end of the day. They don’t seem to mind one bit, though.

“All of us love to do this, and the really funny thing that people are kind of surprised to hear is that we actually all love to be there on Thanksgiving day because that’s the day when people need the most help,” Stahl says. “Those are the panicked calls that come in, like ‘I have a frozen turkey and it’s Thanksgiving morning. What am I going to do?’”

The rewarding nature of the job and the countless human connections they’ve formed are why so many talk-line operators keep coming back year after year. Johnson says the job is “exhausting in one way, but you still feel really good” for having helped save people from “turkey trauma.” So if you have a burning question about your forthcoming turkey feast, go ahead and give them a ring at 1-800-BUTTERBALL. They’d be happy to help.