Trump's Military Deployment to the US-Mexico Border Is Illegal

The Posse Comitatus Act forbids the willful use of “any part of the Army or the Air Force as a posse comitatus or otherwise to execute the laws.” It has been applied as well to the Navy and Marine Corps. 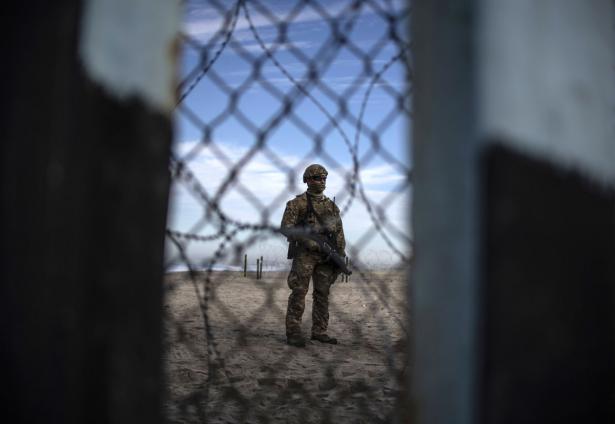 A military serviceman stands guard on the US side of the US-Mexico border fence as seen from Playas de Tijuana, Mexico, on November 16, 2018., Pedro Pardo/AFP/Getty Images

Donald Trump’s decision to send thousands of troops to the US-Mexican border to intercept migrants who intend to apply for asylum is not just a bald-faced political stunt — it is also illegal.

Passed in 1878 to end the use of federal troops in overseeing elections in the post–Civil War South, the Posse Comitatus Act forbids the use of the military to enforce domestic US laws, including immigration laws. For this reason, Trump’s decision to deploy the military to the border to enforce US immigration law against thousands of desperate migrants from Central America — who have undertaken the perilous journey over 1,000 miles through Mexico to the US border in order to apply for asylum — is an unlawful order.

Kathleen Gilberd, executive director of the National Lawyers Guild’s Military Law Task Force, told Truthout, “The deployment of US troops to the Southern border is an illegitimate political ploy and a serious misuse of the military. This action casts shame on a government that treats refugees seeking asylum as enemies.”

The illegality of Trump’s order to the military opens the door to the possibility that service members will resist it: Under the Uniform Code of Military Justice, Nuremberg Principles and Army Field Manuals, service members have a duty to obey lawful orders and a duty to disobey unlawful orders.

Before the midterm elections, pandering to his nativist base, Trump began the deployment of 5,200 active duty troops to Texas, California and Arizona at the southern US border, with the promise of nearly 10,000 more. On October 29, describing the impending arrival of migrants seeking asylum as an “invasion,” Trump tweeted, “This is an invasion of our Country and our Military is waiting for you!”

The Trump administration had originally dubbed the military deployment as “Operation Faithful Patriot,” but it soon abandoned that name, ostensibly to downplay the law enforcement duties of the military troops. Trump’s lawyers invariably realized that using the military to enforce the laws is prohibited by the Posse Comitatus Act.

The Military Is Legally Forbidden From Enforcing Immigration Law

The Posse Comitatus Act forbids the willful use of “any part of the Army or the Air Force as a posse comitatus or otherwise to execute the laws.” It has been applied as well to the Navy and Marine Corps. The only exception to the Posse Comitatus Act’s prohibition is “in cases and under circumstances expressly authorized by the Constitution or Act of Congress.”

Defense Department officials told The New York Times that troops deployed to the border would help construct tents and fencing and some would “potentially” operate drones on the border.

Whether the drones are armed or used for surveillance, they would be assisting in the enforcement of the immigration laws.

“Sending troops to the US border with Mexico is as immoral and illegal as sending them to invade and occupy foreign lands.”

Moreover, the Los Angeles Times reported, “Black Hawk helicopters equipped with night sensors will be available to ferry Border Patrol personnel ‘exactly where they need to be’ to ‘spot groups’ and ‘to fast-rope down’ to intercept migrants trying to cross the border. Military aircraft will conduct surveillance.”

Troops who carry out these functions would also be participating in the enforcement of the immigration laws.

Only in the event of an invasion or insurrection on US soil does the president have the power to order the use of the military within the United States.

There is no invasion or insurrection occasioned by the migrant caravan. In an interview with The New York Times, Adm. James G. Stavridis, former commander of the US military’s Southern Command, called out Trump’s “fictitious caravan invasion.”

Indeed, “Military personnel are legally prohibited from engaging in immigration enforcement, and there is no emergency or cost-benefit analysis to justify this sudden deployment,” Shaw Drake, policy counsel for the ACLU Border Rights Center, said in a statement.

The Duty to Disobey Unlawful Orders

The Uniform Code of Military Justice (UCMJ) requires that all military personnel obey lawful orders. Article 92 of the Uniform Code of Military Justice says, “A general order or regulation is lawful unless it is contrary to the Constitution, the laws of the United States….” Both the Nuremberg Principles and the Army Field Manuals create a duty to disobey unlawful orders.

“Sending troops to the US border with Mexico is as immoral and illegal as sending them to invade and occupy foreign lands,” Gerry Condon, president of Veterans For Peace, told Truthout. “Donald Trump is carrying out a racist war against asylum seekers who are fleeing extreme violence, which in turn is caused by decades of US support for repressive regimes in Central America.”

Members of Veterans For Peace are fanning out along the US/Mexico border from California to Texas in order to reach out to the troops that Trump has ordered to the border.

Condon added, “Soldiers who follow their conscience and refuse to follow illegal orders will have our support. We can also put GIs in contact with legal resources to help them get honorably discharged from the military.”

Trump’s verbal attacks on the migrants and his deployment of troops to the border was a cynical ploy to help Republican candidates in the midterm elections. Although he mounted a consistent tirade against the “caravan” in the weeks leading up to the midterms, Trump has hardly mentioned it since November 6. He did cite it when he announced his new proclamation limiting asylum claims.

Under the 1951 Refugee Convention, any person who arrives in the United States has the right to apply for asylum. Applicants must show they are unable or unwilling to return to their country of origin due to a well-founded fear of persecution on account of race, religion, nationality, membership in a particular social group, or political opinion.

Yet Trump’s new proclamation would deny migrants the right to apply for asylum unless they entered the United States at a designated port of entry, which violates the 1951 Refugee Convention.

On November 9, the ACLU, Southern Poverty Law Center, and Center for Constitutional Rights filed a lawsuit in the United States District Court for the Northern District of California, seeking an injunction to block Trump’s new restrictions on asylum. The complaint states that Trump’s proclamation is “in direct violation of Congress’s clear command that manner of entry cannot constitute a categorical asylum bar.”

In a November 1 letter to Defense Secretary James Mattis, 108 House Democrats decried the “militarization of the southern border to score political points and stoke misleading fears among Americans of immigrants.” They noted, “The President has exploited the caravan of people traveling to the US to seek asylum for his own political gain, and he continues to politicize and militarize this humanitarian crisis as these men, women, and children are fleeing violence and persecution in an unstable part of the world.”

The congress members called on Mattis to clarify the duration of the deployment, the number of troops deployed, the rules of engagement, what training troops have received, and how much the deployment will cost American taxpayers.

Nearly 2,500 hopeful migrants have already arrived in Tijuana and thousands more are en route. Several organizations, including the National Lawyers Guild, have sent legal backup to the border. Members of Veterans For Peace are also at the border, offering support to troops who refuse unlawful orders to enforce the immigration laws.

Trump’s border deployment order ends December 15. Pushback by individual Congress members is important. But Trump responds to negative publicity, so it is the mass mobilization of opposition that may cause him to back down.

Marjorie Cohn is professor emerita at Thomas Jefferson School of Law, former president of the National Lawyers Guild, deputy secretary general of the International Association of Democratic Lawyers and an advisory board member of Veterans for Peace. Cohn, who has testified at military hearings and courts-martial about the duty to disobey unlawful orders, is co-author (with Kathleen Gilberd) of Rules of Disengagement: The Politics and Honor of Military Dissent.

Support Independent Journalism.  Truthout is a nonprofit and depends on your financial support.