The New Attack on Linda Sarsour Is With Vile Lies

Linda Sarsour: The constant defamation of my character is more than any one human being can bear. Bend the Arc: We are disgusted by concerted efforts to spread lies about Linda Sarsour’s sincere support for the victims of the Tree of Life shooting... 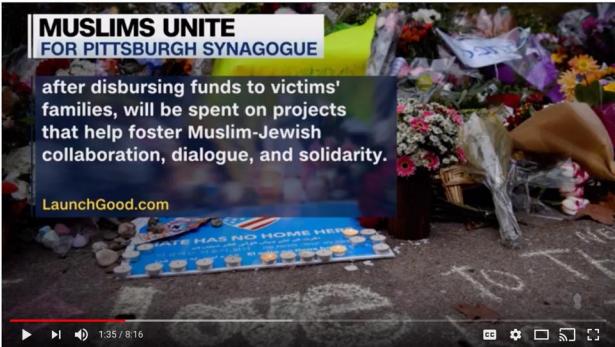 I AM ABSOLUTELY APPALLED.

I AM ABSOLUTELY APPALLED. The constant defamation of my character is more than any one human being can bare. At the drop of a dime, I use my platform to support those in most need at the time they need it most. Right wing Zionists and alt-right will stoop lower every time. I used my name/brand to promote a campaign to provide funeral costs to the families of those slained at the Tree of Life Synagogue - (there was other campaigns that totaled close to $4M). All of the funds raised went to Celebrate Mercy, a non profit Muslim Foundation. They are in charge of dispersing the funds and worked closely with the Islamic Society of Pittsburgh who is a close partner of the Tree of Life Synagogue and have been building with them for years.

$150K was the goal of the campaign and we surpassed it to $230K, $155K has been dispersed and a contract is below signed by the Tree of Life Synagogue who is still reeling with the aftermath of this terrible tragedy. With the $80K, Celebrate Mercy saw an opportunity to work with both the Islamic Center of Pittsburgh and Tree of Life on potential funds to support Muslim-Jewish joint projects in places like Pittsburgh that build off the wonderful solidarity that has emerged out of this tragedy. Celebrate Mercy would administer these funds and will act as grant makers.

Launchgood allocated all funds to Celebrate Mercy. They were not dispersed to me or organizations I lead. Celebrate Mercy has done this many times before and we are grateful for the work they do everyday.

I am absolutely distraught that people will exploit a moment of tragedy to make UNFOUNDED and libelous claims. This will not encourage future moments of meaningful solidarity.

My Jewish friends and allies - SPEAK UP. Don’t be silent. I am exhausted and after the death of Bassem Masri in Ferguson - it’s shit like this that kills people, the pressure, the constant being on the defensive.

Between this and death threats - I don’t know which way I will go BUT I want to live. Live as long as I can.

Bend The Arc: Smears Against Linda Sarsour ‘Shameful And Disgusting’

“We are disgusted by concerted efforts to spread lies about Linda Sarsour’s sincere support for the victims of the Tree of Life shooting and for the American Jewish community. Following the shooting, Linda immediately jumped in to support us in our time of mourning, attending vigils, and promoted fundraising efforts for funerals and for the safety and security of Tree of Life and other Jewish institutions in Pittsburgh. These baseless smears not only seek to vilify Linda, they also serve to erase the incredible outpouring of love and solidarity from the American Muslim community in the wake of the largest antisemitic massacre in our country’s history.

“We see these shameful and disgusting attacks against Linda for what they are: attempts by the political Right to divide our communities by attacking a woman of color leader and exploiting anti-Muslim bigotry. And we see Linda’s actions and allyship for what they are: a long history of standing with all targeted communities out of love and justice.

“We recognize that there are a variety of strongly-held viewpoints in the Jewish community, and we affirm that we do not have to agree with each other or with our allies on everything. But the confusion and pain that some in the Jewish community feel about Linda’s leadership should not be conflated with this right-wing attempt at character assassination. We are living through existential times that require discernment, discipline, and enormous heart. We must collectively remain focused on the threat of the growing white nationalist movement and recognize that our safety is bound up with each other.”

Bend the Arc: A Jewish Partnership for Justice

Crowdfunding project has donated $155,000 to synagogue, but Israeli activist and others wrongly accused it of pocketing all of it but $10,000

Finger-pointing and name-calling over funds raised by Muslims for the families of victims of the Pittsburgh shooting have cast a shadow over commemorations marking a month since the murder of 11 congregants at the Tree of Life synagogue.

The disagreement focuses on money raised by a group called Muslims Unite For Pittsburgh Synagogue. On its crowdfunding page, the group specified that it was raising money to “support shooting victims with short-term needs (funeral expenses, medical bills, etc.)”

The effort was organized by CelebrateMercy – a group led by Tarek el-Messidi, a self-described “Muslim-American social entrepreneur and speaker” – in partnership with MPower Change, the group co-founded by Palestinian-American activist and Women’s March co-chair Linda Sarsour. The funds were to be distributed by the Islamic Center of Pittsburgh, working with the Tree of Life synagogue. 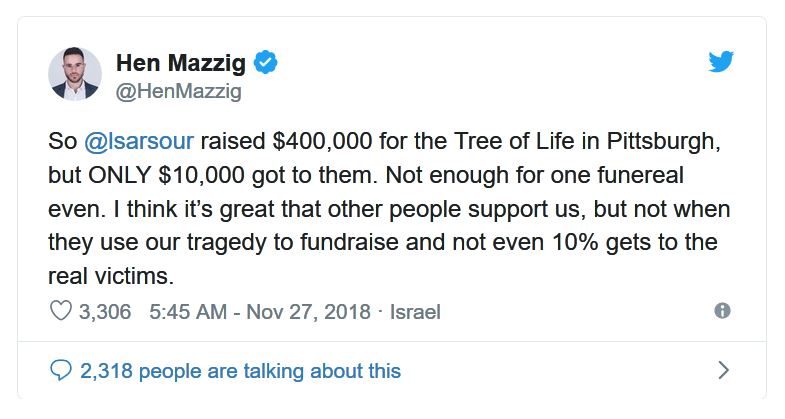 The opening shot in the dispute came in a tweet Tuesday by Israeli activist Hen Mazzig. He complained that Sarsour “raised $400,000 for the Tree of Life in Pittsburgh, but ONLY $10,000 got to them. Not enough for one funereal [sic] even. I think it’s great that other people support us, but not when they use our tragedy to fundraise and not even 10% gets to the real victims.”

Mazzig’s accusation was echoed by the pro-Israel advocacy group StandWithUs and the right-wing blog Townhall, which also charged, without substantiation, that the Islamic Center had “terror ties.” 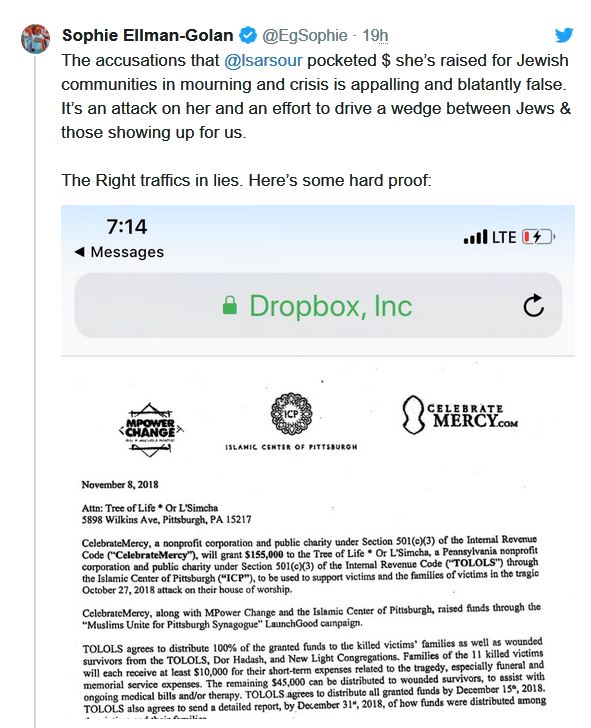 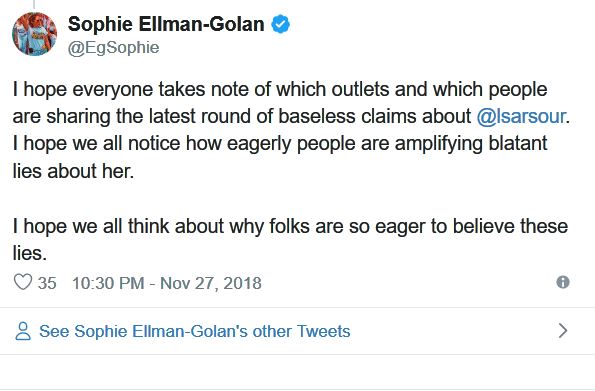 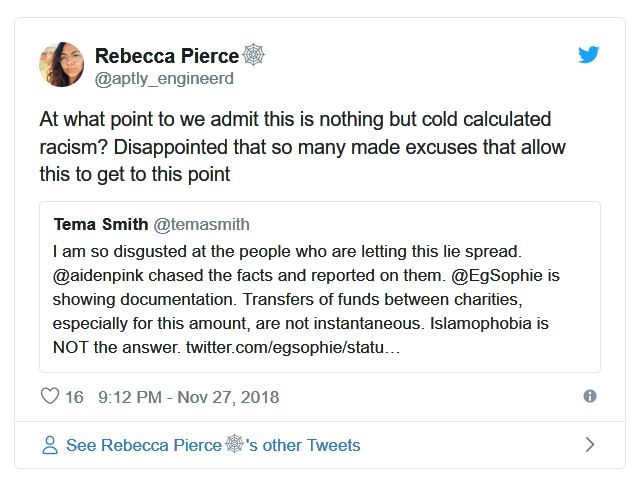 In addition, the Conservative Review alleged that “Islamists in Pittsburgh” had “pocketed” the cash raised for the Jewish victims. And a piece in the Washington Examiner, which has since been removed, was headlined “Linda Sarsour Uses the Blood of Murdered Jews to Line Her Pockets.”

Sarsour’s defenders responded furiously to what they said were baseless smears. Sophie Ellman-Golan, deputy head of social media and outreach for the Women’s March and a progressive Jewish activist, called Mazzig’s charges “appalling and blatantly false” 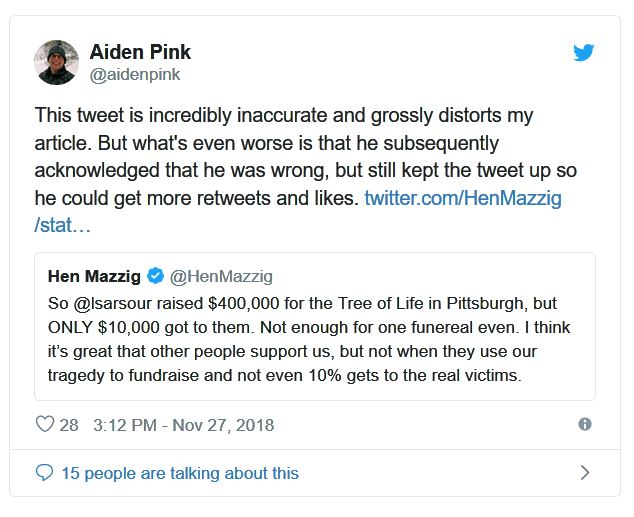 Mazzig’s numbers, it turned out, were an amalgamation of two separate crowdfunding campaigns: One from February 2017 to repair Jewish cemeteries; and the Tree of Life campaign, the details of which were reported in the Forward on Sunday.

The article on the American-Jewish website was written by reporter Aiden Pink, who tweeted later that Mazzig’s tweet was “incredibly inaccurate and grossly distorts my article.” Pink’s piece said that the 2017 cemetery repair campaign raised a total of $162,468.

El-Messidi told the Forward how $100,000 of that has been distributed to various cemeteries. The remaining $62,000, he said, had been held to act as a “rapid-response fund” to be used after “any hate crimes or vandalism that take place at synagogues, or any kind of Jewish institution.”

To that end, el-Messidi said a $10,000 check had been mailed from that fund to the Tree of Life synagogue this week, to be used for building repairs.

The separate crowdfunding campaign for the Tree of Life victims began with the goal of raising $25,000. Overwhelmed with donations, the total was raised to $150,000 and ultimately accumulated nearly $240,000.

In an update to the crowdfunding site on October 29 – two days after the shooting – it was announced that the first installment of funds ($25,000) was transferred “to the Islamic Center of Pittsburgh to immediately begin disbursing help to the families.” The next day, October 30, it announced that it “transferred the second installment of funds ($25K) to the Islamic Center of Pittsburgh (ICP)” and that a center representative “met with the local Jewish Federation and twice with the funeral home to begin planning fund disbursement to the victims’ families.”

Regarding the remaining money, el-Messidi wrote that “Any leftover proceeds, after disbursing funds to victims’ families, will be spent on projects that help foster Muslim-Jewish collaboration, dialogue, and solidarity.”

El-Messidi noted that when decisions were made about which projects to fund, he would update the page.

Despite the fact that funds had begun moving to the Islamic Center almost a month earlier, it was only on November 25 – the day before Pink’s article in the Forward was published – that el-Messidi updated on the crowdfunding site that the Islamic Center of Pittsburgh gave a $155,000 check to the Tree of Life synagogue. He provided a link to a letter acknowledging that 100 percent of the funds would be disbursed by the synagogue to the victims’ families by December 15, 2018.

In the Forward, el-Messidi said he was “still brainstorming” what exactly to do with the remaining $83,000 promised for Muslim-Jewish partnerships, and that “he wanted to have a conversation soon with MPower Change, Sarsour’s organization, to brainstorm more ideas, as well as use their large mailing list to promote the availability of the grants to donors and community members.”

He said that the funds would not be limited to Pittsburgh, though he hoped leaders in that community would be involved.

The director of the Pittsburgh Jewish Federation’s Community Relations Council, Josh Sayles, confirmed to the Forward that the $155,000 transferred to the Islamic Center “is in the process of being distributed to the Jewish community.”

He said his group had “a strong working relationship that goes back many years” with the Islamic Center, and that he and its executive director “have spoken almost daily since the shooting to strategize as to the most efficient way for the Muslim community to allocate the funds. One hundred percent of these funds will go to the Jewish community.”

While the sum raised by the Muslim-sponsored crowdfunding effort is impressive, it represents only a fraction of the total amount of money raised to help the victims’ families and Pittsburgh’s Jewish community.

According to the Pittsburgh Jewish Chronicle, the total amount of donations will total more than $5 million – a sum that includes $3.65 million pledged to the local Jewish Federation’s Victims of Terror Fund.

Jewish community leaders are reportedly working with an expert attorney who helped distribute funds to victims of 9/11, the Sandy Hook massacre, and the Pulse nightclub and Las Vegas shootings.

[Allison Kaplan Sommer is a journalist at Haaretz and panelist on The Promised Podcast.]