“At the end of the day our vision is a world that works for all the children of this world, not for a handful of billionaires.” 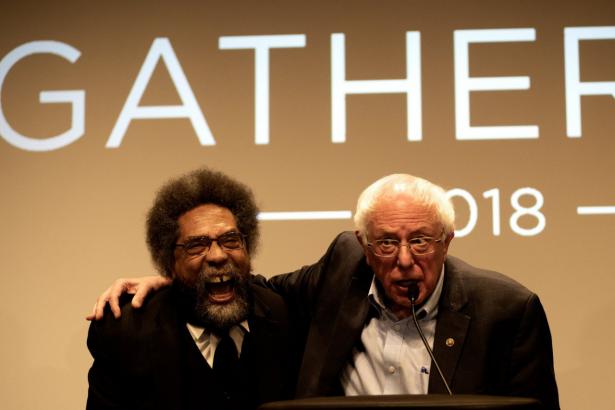 Sen. Bernie Sanders, I-Vt. weaved through dozens of renowned politicos and progressives, greeting Thursday evening’s guests with avidity, presiding over a convention the likes of which Burlington has never seen.

For three days, left-leaning leaders from around the nation have come to the Queen City for “The Gathering” at the behest of the Sanders Institute, a progressive think tank founded by the senator’s wife, Jane O’Meara Sanders.

Waiting for speakers, including Sanders, to take the stage at the ECHO, Leahy Center for Lake Champlain, guests milled about in the packed room chatting and sipping glasses of wine, as high profile attendees — Princeton professor Cornel West, actor and progressive activist Danny Glover, and the mayor of San Juan, Puerto Rico, Carmen Yulín Cruz — trickled into the room.

Organizers said the event will help unify the progressive movement and give participants an opportunity to strategize how to move priorities forward.

“We’re going to try to break through the silos that exist within the progressive community because at the end of the day we know what we are fighting for,” Sanders said, delivering the event’s keynote speech. “At the end of the day our vision is a world that works for all the children of this world, not for a handful of billionaires.”

Discussions about climate change, and implementing a Medicare-for-all health care system, and combating criminal injustice are all on the docket in the coming days.

Since his unsuccessful run for president in 2016, Sanders has been widely credited for moving the national Democratic Party’s politics further to the left.

After bringing progressive stances including pledges to raise the federal minimum wage to $15 an hour and institute a Medicare-for-all system into the mainstream conversation, they have become increasingly popular planks among Democratic politicians across the country.

The Sanders Institute was founded in 2017, a year after the senator’s presidential bid. Although the think tank has been around for more than a year, this weekend’s gathering is its first major event.

Jane Sanders said Wednesday the organization had been planning the gathering for months, but decided to hold it after the midterm elections.

Now that Democrats have retaken control of the House, the policies and issues discussed at the event have a greater chance of having influence in Washington, D.C., she said.

“The Democrats took back the House, so the ideas that we’re coming up with have more of a shot of being brought forward in the House and even possibly pass depending on how strong the progressives are and that will help us in terms of moving the principles and the values and ideas that we have forward,” she said.

Terje Anderson, the chair of the Vermont Democratic Party, said the objective is to build momentum for longstanding progressive priorities.

“I don’t think anyone’s coming up with the theory of relativity here. We’re all talking about things that we’ve been talking about for a while.” Anderson said.

The Sanders Institute’s first event comes as Sanders is mulling a second presidential bid, and after the release of his new book, “Where Do We Go from Here” earlier this week.

Those close to the senator have said that this weekend’s gathering will not be the venue for a campaign announcement.

“This has nothing to do with the campaign or any campaign,” Jane Sanders said.

During his speech Thursday evening, Sanders made no mention, or hint of a 2020 run, though he boasted about the resonance his progressive platform had with the public in 2016.

But the senator’s prospects in the upcoming presidential election were certainly on the minds of attendees Thursday night.

At the beginning of his speech Sanders was interrupted by an audience member who wanted to know if he running.

Sanders ignored her with a chuckle.

When asked whether Sanders should run again, Danny Glover, who campaigned for him in 2016, said it’s still early to be talking about the next election.