labor In 1970s, Workers at this GM Plant Tried to Reinvent the American Dream. Instead, They Watched it Fade Away

With the Lordstown GM plant closing, the idea of tackling worker alienation, behind workers 1972 "industrial Woodstock," seems lost. The measure of that loss is in news that the US death rate is rising due to suicide and drug overdose. 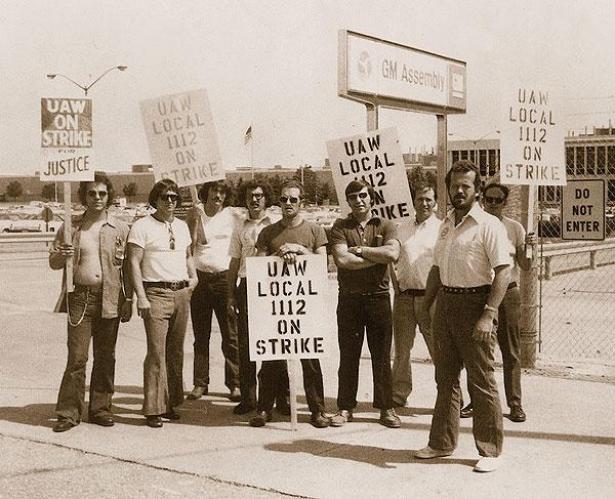 Tim O’Hara started working in General Motors’ iconic Lordstown, Ohio, auto factory back in 1977, but even before then his older brother would come from his 10-hour workdays with the wild stories about life on the assembly line, where long-haired and rebellious 20-something workers clashed nonstop with their stopwatch-toting bosses over every little thing.

“They had fought in the (Vietnam) war and had this attitude that management wasn’t going to come in and force things down their throat,” recalled O’Hara, now 59, who became vice president of United Auto Workers Local 1112 and recently retired. He recalled one day when his brother came home early at 2 p.m. and declared, “They fired Joe … so everybody walked out!”

Those days — when working folks thought time was on their side and they could change the world — seem like a long, long time ago, especially after GM on Monday announced a new round of massive layoffs that would finally end car production at Lordstown, barring some type of divine-level intervention, in March after a 52-year roller-coaster ride.

Somewhat lost in the headlines over the looming end times for Lordstown and its last 1,500 workers still rolling Chevy Cruzes off its assembly line is a remarkable backstory — that the name Lordstown once stood for a now quaint, if not seemingly crazy, dream. It was this idea that middle-class Americans shouldn’t just be grateful for a weekly paycheck but could, and should, fight for a workplace that had meaning, and where they actually had a say in what happened there. The line at Lordstown may finally grind to a stop in three months, but the dream it once represented was slowly strangled over decades.

The world was a very different place on April 28, 1966 when the very first Chevy Impala rolled off the assembly line at GM’s Lordstown plant, a massive monolith that’s visible from the Ohio Turnpike a couple of exits west of Youngstown. America’s then-newest big auto plant used state-of-the-art technology with the ambitious — perhaps overly ambitious — goal of rolling 100 new cars off the line every hour and (a few years later) to stay ahead of the smaller cars from Japan that were just making their first tiny dent in the booming American market.

But what passed for robotics in the mid-1960s didn’t prevent GM from needing roughly 8,000 auto workers, and sometimes more, to run the line in three shifts. Nobody knew it at the time, but this was the peak — and the beginning of the end — of a post-World War II era of America as the world’s undisputed global economic powerhouse driven by blue-collar union clout forged in often long and occasionally violent strikes. Many of the men — and it was mostly men — who filled the job rolls at Lordstown held two-year and four-year college degrees, because the roughly $6-an-hour pay topped all the other jobs in eastern Ohio, and offered the eventual promise of a sturdy ranch house with an affordable mortgage, a kids’ college fund, and maybe a boat or vacation home in middle age

“I had to take a pay cut to become a school teacher,” recalled John Russo, who worked for a short while in the late 1960s at a nearby Oldsmobile plant and who later became an authority on Lordstown history as (now retired) director of Youngstown State University’s Center for Working-Class Studies.

Yes, it was the American Dream … but there was a catch.

The stereotype of the early 1970s is that union workers were hard-hat-wearing conservative “Archie Bunkers,” looking to wail on anti-war hippies. And yes, those things did happen, but the reality could be much more complicated, especially at Lordstown where the late 1960s hiring surge created a workforce heavy with baby boomers, and an average age of just 24.

This new generation of factory workers soaked up the patchouli-scented, bell-bottomed culture that was in the air all around them. Some grew their hair down their shoulders and sprouted beards or mustaches. Some used their coffee breaks to go out and get high. Almost all chafed at authority, not just from the factory bosses who were constantly on their case to speed up the assembly line, but also their UAW union leaders who didn’t “get” this new breed.

The young lords of Lordstown found the assembly line — 35 second bursts of a dull, repetitive task, and a 5-second break before the next Impala or Vega rolled up — to be soul-crushing work. Botched cars — some of them slashed, deliberately sabotaged by angry workers — piled up in the giant lot outside the factory. A good chunk of the labor force had little fear of conflict with their bosses because they’d recently returned from the front lines in Vietnam.

Russo recalled that during his later research he asked a Lordstown employee if he’d been afraid of losing his job during the 1970s labor strife. “You’ve got to be kidding me,” the man responded. “I just had 500,000 Vietnamese trying to kill me. You think I’m scared of GM?”

Here’s one worker’s contemporaneous rant about worker alienation at Lordstown in early 1970s: “You do it automatically, like a monkey or dog would do something by conditioning. You feel stagnant; everything is over and over and over. It seems like you’re just going to work and your whole purpose in life is to do this operation, and you come home and you’re so tired from working the hours, trying to keep up with the line, you feel you’re not making any advancement whatsoever. This makes the average individual feel sort of like a vegetable.”

It all boiled over in March 1972. The frequent orders from Detroit to make the assembly line run faster, faster, faster finally caused the Lordstown workers to strike for 22 days, a work stoppage that cost GM $150 million, made headlines from coast to coast and was dubbed by Newsweek as “industrial Woodstock.” When its music finally stopped, the young workers did win some concessions — mainly an end to the hated speed-up orders — but, more importantly, gained acclaim as avatars of a new generation of laborers who valued a more meaningful work experience over a few extra bucks every new contract.

The newsmagazines even called this revolt against on-the-job alienation “the Lordstown Syndrome,” but what the workers were really trying to do was even more ambitious than that — to renegotiate the basic terms of the American Dream.

But their window of opportunity was incredibly short, and in the end it only opened a tiny crack. The utopia that the Lordstown workers really desired — much greater worker input and even control of how the factory was run, based on successful models in Europe, with management actually listening to their ideas for how to design a better car — were a little too radical for stodgy GM executives and even less adventurous UAW bosses.

“This wasn’t about more pay or shorter hours, which had been the historical struggle of the labor movement” noted Vanderbilt University historian Jefferson Cowie, who chronicled the Lordstown strike in “Stayin’ Alive: The 1970s and the Last Days of the Working Class.” “These guys basically wanted a better life on the job. They wanted to re-envision work and how work was done” — studying worker co-ops in Sweden and other models.

But within five years, Americans were less worried about making blue-collar work better and more concerned about finding work, period. On September 19, 1977 — known famously in the Youngstown-Warren area as “Black Monday” — the massive Youngstown Sheet and Tube plant shut down on its 5,000 workers and caused an endless ripple effect of factory closings and layoffs that left a trail of foreclosed and crumbling homes, abandoned lots, and crowded jails and drug-treatment centers that has lasted to this day.

For a long time, GM’s Lordstown plant, as one of the automaker’s more modern facilities, did a little better than its neighbors in eastern Ohio. The strikes diminished and the layoffs — sometimes as long as a year-and-a-half — alternated with occasional hiring surges and added shifts that cycled along with ever-changing consumer demand for bigger or smaller cars. Workers and management did cooperate much more on plant issues — if not on the revolutionary level dreamed of in the 1970s — with the shared goal of reclaiming GM’s lost market share.

But basically workers stopped rebelling both because their biggest bargaining chip — the freedom of booming post-war economy — was long gone, and also because they were older and less rebellious.

“It was a combination of economic factors and the fact the (union) members got older, got married, started having kids — they weren’t going to walk out of work and lose three days pay,” O’Hara told me. “They negotiated. They needed the job security. They softened their tone.”

What didn’t soften was the steady decline of U.S. manufacturing — the growing automation, the steady flow of jobs to Mexico and other lower-cost locales, the whims of American drivers who ditch smaller cars like the Chevy Cruze, produced at Lordstown ever since GM’s government bailout in 2010, for SUVs as soon as the price of a gallon of gas drops a few cents.

Politicians used Lordstown as a prop. Barack Obama touted his bailout there in 2009, and Donald Trump won an estimated 40 percent of the union vote and carried Ohio before he told a July 2017 rally that the state’s factory jobs were “all coming back. They’re all coming back. Don’t move. Don’t sell your house.”

The political blather — and a Trump-signed tax cut that fattened GM’s bottom line — had zero impact on GM’s CEO Mary Barra. She created a new “Black Monday” when she announced 14,500 North American layoffs that would include ending all production at Lordstown, even as new Chevy Cruzes continue to roll off a line in Mexico.

Barra, who earned $21.96 million last year, or 295 times what a GM median employee makes (a level not dreamed of during the worker unrest of the 1970s), proclaimed on her new “Black Monday that she’s “very focused on increasing and creating shareholder value” (and indeed GM stock soared on the news of American worker misery.) She’s obviously not focused on the broader stakeholders — certainly not the thousands of GM workers who repetitively drilled and bolted for 30 years, in the end not for a new powerboat but for a pink slip.

In 2018, 46 years after the fever of “industrial Woodstock” broke, the idea of tackling worker alienation, even as it shifts from dying auto plants to Amazon’s Orwellian-named “fulfillment centers,” seems as quaint as pet rocks and “Have a nice day” smiley faces. And yet it’s impossible to divorce the diminishing prospects for America’s working class from this week’s news that the U.S. death rate is actually rising, thanks largely to suicide and drug overdoses. We can’t even talk about solving these problems because we’ve lost the language to describe them.

The young rebels of Lordstown had that language in 1972. They risked their paychecks and fought their bosses in a surreal kind of American Dream therapy, and it’s hard not to imagine how history might have changed if we’d taken “the Lordstown syndrome” and the lost cause of worker alienation seriously, instead of rolling over it with 100 cars every minute.

“The middle class has been under attack for years,” O’Hara told me, even as leaders of his union local gamely signed up for one last “Drive It Home” campaign desperately aimed at keeping Lordstown open past the slated March 2019 end. “As for what the future brings … it doesn’t look good for middle-class people.”

[Will Bunch is a writer for The Philadelphia Inquirer (TNS)]