Can the Yellow Vests Speak?

France's elites were quick to condemn the gilets jaunes protesters as stupid and backward. But as novelist Édouard Louis writes, they're just standing up for their rights. 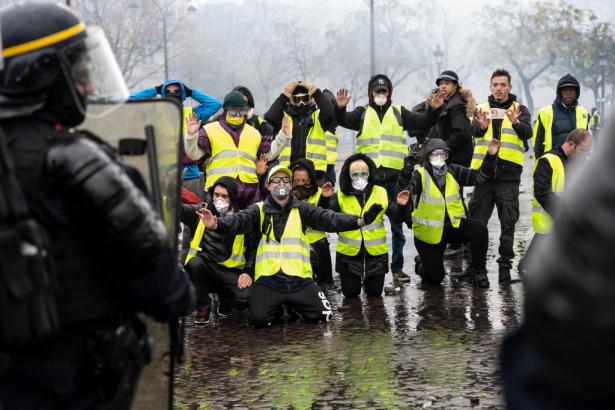 One of France’s most brilliant young novelists, Édouard Louis’s work emphasizes the daily humiliations and petty brutality of life in small-town France. A critic of the Emmanuel Macron’s government, he has been a vocal supporter of the “gilets jaunes” or “yellow vests” protests which have swept across the country in recent weeks, sparked by a row over rising fuel prices. In particular, the writer has combatted media attempts to smear the participants as “country bumpkins” or stupid opponents of progress. In this text, originally published on Les Inrockuptibles, Louis proclaims that “those who insult the gilets jaunesare insulting people like my father.”

For some days now, I’ve been trying to write a text on and for the gilets jaunes, but I can’t do it. Something in the extreme violence and class contempt that is battering down on this movement leaves me paralyzed. For in a certain sense I feel that I personally am being targeted.

It’s hard for me to describe the shock I felt when I saw the first images of the gilets jaunes. In the photos accompanying the articles I saw bodies who almost never appear in the public and media space — suffering bodies ravaged by work, by fatigue, by hunger, by the permanent humiliation of the dominated by the dominant, by social and geographical exclusion. I saw tired bodies and tired hands, broken backs and exhausted faces.

The reason I was so overwhelmed was, of course, my loathing of the violence of the social world and of inequality. But also, and perhaps especially, it was because the bodies that I saw in the photos looked like my father’s, my brother’s, my aunts’ . . . They looked like the bodies of my family, the inhabitants of the village where I lived as a child, of these people whose health is devastated by poverty and misery. Of those people who — rightly — constantly repeated, day after day throughout my childhood, “We count for nothing, no one talks about us.” Hence the reason why I felt personally targeted by the contempt and the violence of the bourgeoisie, which immediately came down on this movement. For me, as me, anyone who insulted a gilet jaune was insulting my father.

Right from the start of this movement we have seen “experts” and “politicians” in the media belittling, condemning, and mocking the gilets jaunes and the revolt that they embody. I saw the words “barbarians,” “idiots,” “yokels,” “irresponsible” spread across social networks. The media spoke of the gilets jaunes’ “grunting”: for them, the popular classes do not revolt, but instead grunt like farm animals. I heard of the “violence of this movement” when a car was torched or a window was smashed or a statue was tarnished.

A common example, this, of the differential perception of violence: a large part of the media-political world wanted us to believe that violence is not the thousands of lives destroyed and reduced to misery by politics, but a few burnt-out cars. You must really never have experienced poverty, if you think that graffiti on a historic monument is worse than the impossibility of being able to take care of yourself, of living, of feeding yourself or your family.

The gilets jaunes speak of hunger, of precarity, of life and death. The “politicians” and part of the journalists reply: “the symbols of our Republic have been tarnished.” But what are these people talking about? How dare they? What planet are they from? The media also talk about racism and homophobia among the gilets jaunes. Who are they kidding? I do not want to talk about my books, here. But it is interesting to note that whenever I have published a novel I have been accused of stigmatizing poor and rural France precisely because I mentioned the homophobia and racism that existed in the village where I lived as a child. Journalists who had never done anything for the popular classes were enraged, and suddenly set themselves up to play the defenders of these same classes.

For the dominant, the popular classes are the perfect representation of what Pierre Bourdieu calls a class-object; an object that can be manipulated by discourse, one day represented as the salt of the earth — the authentic poor — and the next day as racists and homophobes. In both cases, the underlying intention is the same: to prevent the popular classes’ speech, about themselves, from ever coming to the surface. Too bad if you have to contradict yourself from one day to the next, so long as they keep quiet.

Of course, there have been homophobic and racist comments and acts among the gilets jaunes. But since when have these media and “politicians” been so concerned about racism and homophobia? What have they done to combat racism? Have they used their power to speak out about Adama Traoré [a twenty-four-year-old black man who died in police custody] and the committee for Adama? To speak out about the police violence that strikes blacks and Arabs in France every day? And wasn’t it they who gave [anti-LGBT activist] Frigide Barjot and countless priests a platform at the very moment of mariage pour tous[the campaign for equal same-sex marriage rights] and, in so doing, permitted and normalized homophobia on the TV?

This movement must continue, for it embodies something right, urgent, and profoundly radical, because faces and voices that are usually reduced to invisibility are finally visible and audible. The fight will not be easy: as we can see, the gilets jaunes represent a sort of Rorschach test for a large part of the bourgeoisie. The gilets jaunes force them to express their class contempt and the violence that they usually only express in an indirect way. That is, the same contempt that has destroyed so many lives around me, and which continues do so, and ever more so; this contempt that reduces me to silence and paralyzes me, even to the point that I can’t write the text I wanted, to express what I wanted to express.

But we must win. For there are many of us now telling ourselves that we can’t tolerate another defeat for the Left, which is thus also a defeat for those who suffer.