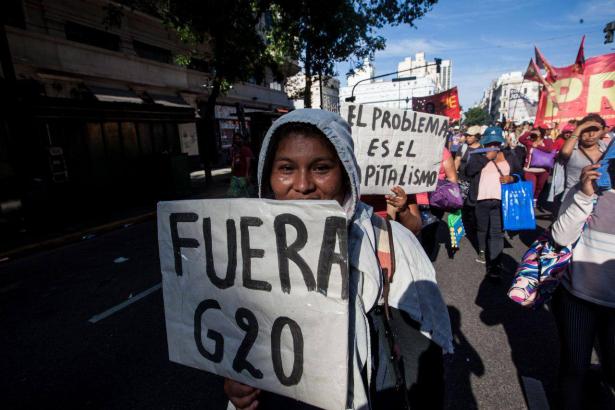 “Out G20” “The problem is capitalism”,Photo: Emergentes

Teachers and activists in Heraklion explain how they drove the ultra-nationalist, far-right Greek party from the island.

Today, a large population of Iranians are displaying civil disobedience. Taking to the streets with their hair illegally on show, they aren’t calling for a hijab ban. But the opposite: the freedom of choice.

__________
Unravelling of the Palestinian National Movement

The deepening Fatah-Hamas rift and US-Israel moves have left people to face the vicious occupation on their own.

Over the last decade, the emergence of the indignados movement, Podemos, and Catalonia’s bid for independence have significantly eroded the post-Franco order’s legitimacy.

Activists from across Latin America and the world marched to reject the G20 Summit.

During the last French presidential campaign, a group of grass-roots activists in Guiana began demonstrating against the sale of a nonprofit hospital to a private operator. As its support widened among the population, the movement and its leaders broadened the scope of their demands.

France is not on the edge of a revolutionary situation or of a civil war. But the movement is on the rise, and very determined.