Hundreds of asylum-seekers spent part of Christmas Eve in a downtown parking lot here without knowing where they’ll end up next. Lawmakers and immigrant rights groups scramble after ICE releases hundreds of migrants without alerting local shelters. 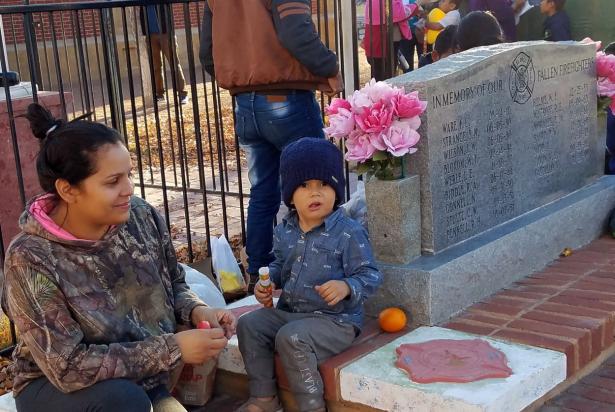 Mariel Mendez, 28, sits with her son at a park in downtown El Paso on Christmas Eve 2018. The asylum-seekers from Honduras, who ate food provided by volunteers, were part of a group of hundreds ICE released at a bus station., credit: Julián Aguilar/The Texas Tribune

Hundreds of asylum-seekers spent part of Christmas Eve in a downtown parking lot here without knowing where they’ll end up next.

Immigrations and Customs Enforcement agents began dropping off the migrants late Sunday at a local bus station without warning local shelters that usually take in large groups after they seek asylum and are released by federal agents. About 200 arrived Sunday, about 200 more arrived Monday and the total number could exceed 800 by Wednesday, according to U.S. Rep. Beto O'Rourke, D-El Paso.

Normally, ICE would alert the Annunciation House, a local shelter that has taken in tens of thousands of migrants and has several locations across this border city. But that didn’t happen Sunday night, O'Rourke said.

“Our challenge is that, so far, ICE has been unable to give us enough of a heads up to have those beds ready so you don’t have migrants sitting on the sidewalk or in a parking lot or in a bus station or on a Sun Metro bus,” O'Rourke told reporters in the parking lot of a local park about a block west of the bus station.

O’Rourke said when the shelters are full, there is a coordinated effort with the city’s office of emergency management to set up temporary shelters and that ICE usually gives local responders 24 hours' notice. The shelters are at capacity but volunteers and workers are usually able to find temporary housing elsewhere if they are given enough notice.

The drop-offs come as the government is in the midst of a partial shutdown over a dispute in the U.S. Congress over funding for President Donald Trump’s proposed border wall. ICE didn’t immediately respond to a request for comment Monday and it’s unclear what role the shutdown played in the situation. The El Paso sector of the U.S. Border Patrol, the agency that first takes in migrants when they arrive in the United States between the ports of entry, said Friday its public information offices would not be available during the shutdown. In October, ICE released more than 200 asylum seekers to the streets of El Paso after saying the agency could no longer hold them for more than a few days.

O’Rourke said he and his staff have been in touch with ICE and Customs and Border Protection offices and are doing what they can to ensure the migrants are placed at shelters or hotels – at least temporarily – until they make their way toward their final destinations.

“I know that the people that work with ICE, CBP and Annunciation House want to do what’s just, and I hope that [after] the conversations we’ve had and will have, we’ll be able to do what’s necessary."

As she huddled with her 2-year old son Marcelo at downtown’s Firefighters Memorial Park, Mariel Mendez, 28, said she was unsure of her next move.

“We’re hoping to be able to call family in Tennessee,” she said in Spanish. “But so far we haven’t heard anything. They just dropped us off without” any guidance. The pair traveled for a month by bus from Honduras before arriving in Ciudad Juárez, Mexico, before they crossed the Rio Grande and turned themselves in.

On the Annunciation House Facebook page, officials there said they were able to provide shelter to the migrants who arrived Sunday through its network of partner volunteers. It asked the public for donations of money, food and new clothing. By Monday afternoon it was clear that call was answered as several El Pasoans arrived near the bus station with food, water, clothing and stuffed animals for the children.

“We went earlier today to Sam’s to buy a whole bunch of food but it wasn’t enough,” said El Pasoan Javier Grajeda. “So we had to go get a bunch of dollar burgers from McDonalds.”

Grajeda, an oil field engineer who works in Midland, said he might be late for his planned Christmas Eve dinner but he couldn’t turn his back on his community. The cold weather — forecasts called for low 40s Monday night — is also a concern, he said.

"We brought a few blankets but that’s not enough,” he said. “It’s not right of them to do this on such short notice. There are volunteers, but they need enough time” to act.

[Julián Aguilar reports on politics and border affairs from the Texas-Mexico border. His focuses include immigration reform and enforcement, voter ID, international trade, border security, and the drug trade. His political coverage has included local, legislative and congressional races in Texas, as well as local and national elections in Mexico. Before joining the Tribune, he was a freelance writer for the Fort Worth Weekly; a government and crime reporter for the Laredo Morning Times; and a political writer for the Rio Grande Guardian. A native of El Paso, he has a bachelor's degree in English from the University of Texas and a master's degree in journalism from the Frank W. Mayborn Graduate Institute of Journalism at the University of North Texas.]

Perhaps it goes without saying — but producing quality journalism isn't cheap. At a time when newsroom resources and revenue across the country are declining, The Texas Tribune remains committed to sustaining our mission: creating a more engaged and informed Texas with every story we cover, every event we convene and every newsletter we send. As a nonprofit newsroom, we rely on members to help keep our stories free and our events open to the public. Do you value our journalism? Show us with your support.