AOC’s advocacy of a tax rate of 70-80 percent on very high incomes, is obviously crazy, right? Who thinks that makes sense? Only ignorant people like - Peter Diamond, Nobel laureate in economics, arguably the world’s leading expert on public finance 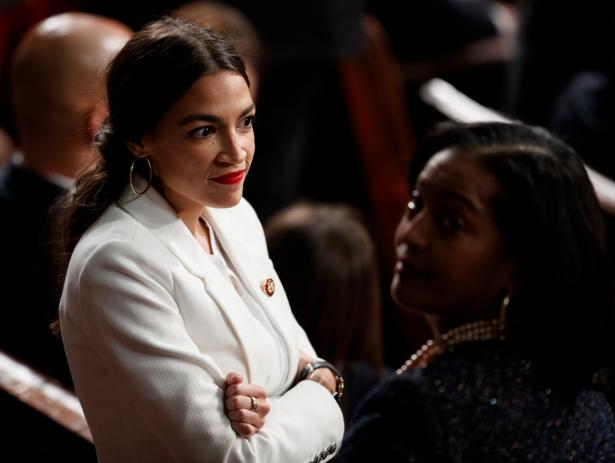 I have no idea how well Alexandria Ocasio-Cortez will perform as a member of Congress. But her election is already serving a valuable purpose. You see, the mere thought of having a young, articulate, telegenic nonwhite woman serve is driving many on the right mad — and in their madness they’re inadvertently revealing their true selves.

Some of the revelations are cultural: The hysteria over a video of AOC dancing in college says volumes, not about her, but about the hysterics. But in some ways the more important revelations are intellectual: The right’s denunciation of AOC’s “insane” policy ideas serves as a very good reminder of who is actually insane.

The controversy of the moment involves AOC’s advocacy of a tax rate of 70-80 percent on very high incomes, which is obviously crazy, right? I mean, who thinks that makes sense? Only ignorant people like … um, Peter Diamond, Nobel laureate in economics and arguably the world’s leading expert on public finance. (Although Republicans blocked him from an appointment to the Federal Reserve Board with claims that he was unqualified. Really.) And it’s a policy nobody has ever implemented, aside from … the United States, for 35 years after World War II — including the most successful period of economic growth in our history.

To be more specific, Diamond, in work with Emmanuel Saez — one of our leading experts on inequality — estimated the optimal top tax rate to be 73 percent. Some put it higher: Christina Romer, top macroeconomist and former head of President Obama’s Council of Economic Advisers, estimates it at more than 80 percent.

Where do these numbers come from? Underlying the Diamond-Saez analysis are two propositions: Diminishing marginal utility and competitive markets.

Diminishing marginal utility is the common-sense notion that an extra dollar is worth a lot less in satisfaction to people with very high incomes than to those with low incomes. Give a family with an annual income of $20,000 an extra $1,000 and it will make a big difference to their lives. Give a guy who makes $1 million an extra thousand and he’ll barely notice it.

What this implies for economic policy is that we shouldn’t care what a policy does to the incomes of the very rich. A policy that makes the rich a bit poorer will affect only a handful of people, and will barely affect their life satisfaction, since they will still be able to buy whatever they want.

So why not tax them at 100 percent? The answer is that this would eliminate any incentive to do whatever it is they do to earn that much money, which would hurt the economy. In other words, tax policy toward the rich should have nothing to do with the interests of the rich, per se, but should only be concerned with how incentive effects change the behavior of the rich, and how this affects the rest of the population.

But here’s where competitive markets come in. In a perfectly competitive economy, with no monopoly power or other distortions — which is the kind of economy conservatives want us to believe we have — everyone gets paid his or her marginal product. That is, if you get paid $1000 an hour, it’s because each extra hour you work adds $1000 worth to the economy’s output.

In that case, however, why do we care how hard the rich work? If a rich man works an extra hour, adding $1000 to the economy, but gets paid $1000 for his efforts, the combined income of everyone else doesn’t change, does it? Ah, but it does — because he pays taxes on that extra $1000. So the social benefit from getting high-income individuals to work a bit harder is the tax revenue generated by that extra effort — and conversely the cost of their working less is the reduction in the taxes they pay.

Or to put it a bit more succinctly, when taxing the rich, all we should care about is how much revenue we raise. The optimal tax rate on people with very high incomes is the rate that raises the maximum possible revenue.

And that’s something we can estimate, given evidence on how responsive the pre-tax income of the wealthy actually is to tax rates. As I said, Diamond and Saez put the optimal rate at 73 percent, Romer at over 80 percent — which is consistent with what AOC said.

An aside: What if we take into account the reality that markets aren’t perfectly competitive, that there’s a lot of monopoly power out there? The answer is that this almost surely makes the case for even higher tax rates, since high-income people presumably get a lot of those monopoly rents.

So AOC, far from showing her craziness, is fully in line with serious economic research. (I hear that she’s been talking to some very good economists.) Her critics, on the other hand, do indeed have crazy policy ideas — and tax policy is at the heart of the crazy.

You see, Republicans almost universally advocate low taxes on the wealthy, based on the claim that tax cuts at the top will have huge beneficial effects on the economy. This claim rests on research by … well, nobody. There isn’t any body of serious work supporting G.O.P. tax ideas, because the evidence is overwhelmingly against those ideas.

Look at the history of top marginal income tax rates (left) versus growth in real GDP per capita (right, measured over 10 years, to smooth out short-run fluctuations.):

What we see is that America used to have very high tax rates on the rich — higher even than those AOC is proposing — and did just fine. Since then tax rates have come way down, and if anything the economy has done less well.

Why do Republicans adhere to a tax theory that has no support from nonpartisan economists and is refuted by all available data? Well, ask who benefits from low taxes on the rich, and it’s obvious.

And because the party’s coffers demand adherence to nonsense economics, the party prefers “economists” who are obvious frauds and can’t even fake their numbers effectively.

Which brings me back to AOC, and the constant effort to portray her as flaky and ignorant. Well, on the tax issue she’s just saying what good economists say; and she definitely knows more economics than almost everyone in the G.O.P. caucus, not least because she doesn’t “know” things that aren’t true.

[Paul Krugman has been a New York Times Opinion columnist since 2000 and is also a Distinguished Professor at the City University of New York Graduate Center. He won the 2008 Nobel Memorial Prize in Economic Sciences for his work on international trade and economic geography. @PaulKrugman]