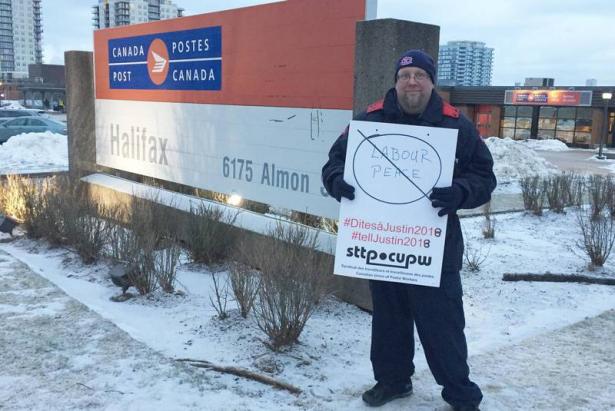 Mike Keefe, first vice-president of the Nova Local of the Canadian Union of Postal Workers, pickets in front of the Halifax Metro Processing Plant., Nicole Munro

U.S. postal workers gathered in solidarity Tuesday outside Canada’s embassy in Washington to protest the federal Liberal government’s decision to legislate their northern counterparts back to work.

About 50 members of the American Postal Workers Union and the National Association of Letter Carriers gathered on Pennsylvania Avenue down the street from Capitol Hill in a visible and full-throated show of support for Canada Post employees.

Brandishing hand-lettered placards and a bullhorn, they chanted slogans, sang pro-union songs and marched outside the embassy, all under the watchful eye of uniformed members of the U.S. Secret Service, which protects Washington’s foreign missions, as well as the White House.

“We’re here in solidarity with the Canadian Union of Postal Workers and our counterparts in Canada who move the mail every day with pride and serve the people of Canada and of the United States,” said APWU president Mark Dimondstein.

“We’re also here to condemn the Trudeau government, in terms of taking away and denying workers their legal right to withhold their labour to get a good contract.”

A dispute over wages, benefits and job security culminated last October in a series of temporary rotating walkouts at Canada Post facilities in various places across Canada, throwing local and regional mail delivery services into disarray.

The strikes persisted for weeks, affecting the busy holiday shipping season, until Ottawa passed legislation in November. That law required workers to resume their duties and appointed a mediator to arbitrate an end to the dispute between union and the Crown corporation, which has been struggling for years with declining traditional-mail volume.

Ordering them back to work constituted a violation of the charter rights of Canada’s postal workers, said Dimondstein.

The issue of collective bargaining strikes a nerve for postal workers south of the border, who have been nervous about their own rights ever since President Donald Trump — apparently in a fit of pique with Amazon CEO Jeff Bezos — took a special interest in the U.S. Postal Service.

Trump, who has accused the ubiquitous online retailer of unfairly exploiting and overburdening the U.S. postal system, ordered a task force to explore the issue of reforming the postal service.

That report, released last month, recommended that the money-losing USPS develop a new pricing model that would lift price caps and establish market-based prices for mail and packages not considered “essential postal services.” It also called for redefined “universal service obligations,” which the union argues would slow service, cut delivery days and lead to wide-scale privatization.

“The changing business that we’ve faced here, they face the same thing in Canada, and I think their members are eager to provide that service, but they want to do so safely, and they want to be compensated fairly,” said Brian Renfroe, executive vice-president of the National Association of Letter Carriers.

The dispute in Canada is far from over. Talks with arbitrator-mediator Elizabeth MacPherson, former chairwoman of the Canada Industrial Relations Board, broke down in December and are scheduled to resume Wednesday.

That process is aimed at reaching arbitrated settlements that would be imposed on Canada Post and its 42,000 urban carriers and 8,000 rural and suburban employees. A spokesman for Canada Post refused to comment on the process Tuesday.