film In Netflix’s "Get Me Roger Stone", the Notorious GOP Operative Plays Both Narrator and Villain

"Get Me Roger Stone" uses Stone’s story as a cipher for modern political history. It’s a horror show! 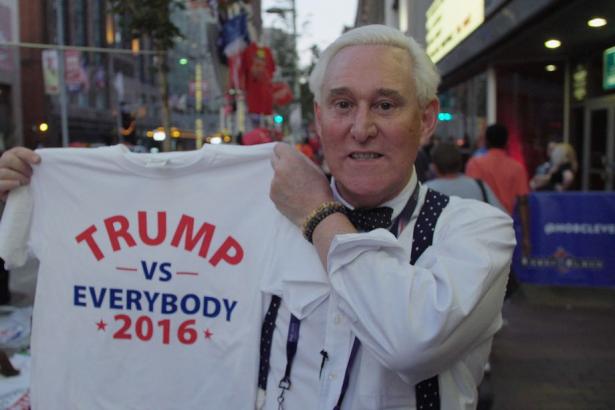 If you think this is overblown lefty rhetoric, think again: Stone — who was arrested and indicted Friday morning by FBI Special Prosecutor Robert Mueller and his team, on charges of obstruction, making false statements, and witness tampering — has always worn such monikers like a badge of honor. Get Me Roger Stone traces the history of American conservatism from Nixon’s downfall to Donald Trump’s victory in 2016. And while it brings in talking heads to add background — New Yorker writers Toobin and Jane Mayer, who have intimate knowledge of the history, along with Fox News personality Tucker Carlson — its main narrator is Stone himself, who shows no qualms about what he’ll say on camera.

In the documentary, which was released six months after Trump’s election, Stone portrays himself as a dandy and a dirtbag, a sleazeball who embodies the rage and drive for fame that’s at the heart of the worst corners of American politics. He’s an Infowars regular and an object of some marvel and fear to everyone, even those on his political side. He has principles, but they’re entirely in service of staying in the public eye; he calls them “Stone’s rules,” and sprinkles them throughout the film. One such rule: “It is better to be infamous than to never be famous at all.” Another: “Hate is a more powerful motivator than love.”

In addition to unpacking the Roger Stone myth, the film functions as a surprisingly workmanlike connect-the-dots history of what happened to the Republican Party over the past five decades, mostly because Stone was there at every turn: as a young activist, as a political operative, as one of Washington’s most powerful lobbyists (and a partner of Paul Manafort), and as one of Washington’s most feared, despised, and sought-after insiders. And he’s proud of it.

Early on, Stone explains, he learned about “the value of disinformation” (“Of course, I’ve never used it since then,” he says, practically winking) and put it to great use in driving massive spending for attack ads. The film makes the case that Stone, seeing how Ross Perot’s Reform Party run cost George H.W. Bush his second term in 1992, and wanting to ensure that George W. Bush would be elected, engineered the explosion of the Reform Party in 2000 by encouraging Pat Buchanan to run for its nomination, then encouraging another candidate to seek the nomination and split the party’s vote — Donald J. Trump. (Stone mainly sat out the 1996 election, as he was all but driven underground at the time by a group sex scandal that landed him in the tabloids.)

In fact, Stone’s been a Trump fan for a long time. Trump talks freely to the filmmakers about how Stone had been trying to convince him to run since 1987. Stone makes no bones about it either. “I was like a jockey looking for a horse,” he says. “He was like a prime piece of political horseflesh, in my view.”

Once you spend screen time with Stone, it becomes clear how much of Trump’s rhetoric echoes him. Mayer points out that Stone is the ultimate insider, so he’s a genius at packaging someone he can sell as the ultimate outsider. Stone all but admits to inventing the birther rhetoric, which called into question Barack Obama’s status as a citizen.

Carlson says that though Stone left the Trump campaign in an official capacity under dubious circumstances, he was more or less the reason for the firing of Corey Lewandowski, with whom he often clashed, and the installation of Paul Manafort, his old lobbying partner, as the campaign’s manager. Manafort eventually quit the campaign, but was replaced with Steve Bannon, whom Stone calls “a bomb thrower in the Stone mold.”

The single most useful insight of Get Me Roger Stone is that men like Stone are driven not so much by ideology as by an overweening thirst for power and celebrity, propelled by absolute antipathy for their enemies. “Those who say I have no soul, those who say I have no principles, they’re losers,” Stone says at one point. “They’re bitter losers.” Tracing his rise and steady influence through the past five decades is helpful precisely because it doesn’t treat the 2016 election as if it came from nowhere. Rather, it’s portrayed as the culmination of a bitterness cultivated by powerful men who stand to gain everything from their success, who fear nothing more than having the spotlight move away from them.

Near the end of the film, Stone is asked what message he gives to those watching the film who are horrified by him and hate his guts. “I revel in your hatred,” he says. “Because if I weren’t effective, you wouldn’t hate me.” Stone proclaims early on that one of his rules is that “the past is fucking prologue.” If he’s right, then Get Me Roger Stone should properly be marketed as horror.

Get Me Roger Stone is streaming currently on Netflix.

Alissa Wilkinson is Vox's film critic. She's been writing about film and culture since 2006, and her work has appeared at Rolling Stone, The Washington Post, Vulture, RogerEbert.com, The Atlantic, Books & Culture, The Los Angeles Review of Books, Paste, Pacific Standard, and others. Alissa is a member of the New York Film Critics Circle and a 2017-18 Art of Nonfiction writing fellow with the Sundance Institute.