"We need to move ahead from the ACA to a single-payer, Medicare for All system that assures first-dollar coverage for everyone." 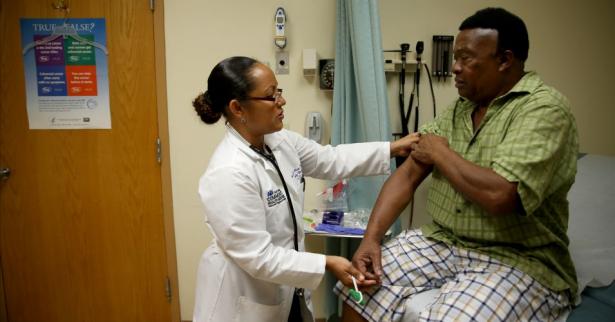 A majority of personal bankruptcy cases examined in a new study were brought about by high medical bills—just as most bankruptcy cases were before the passage of the Affordable Care Act.,Joe Raedle/Getty Images

A new study shows how the Affordable Care Act (ACA) has failed to solve one of the major crises in the American for-profit health insurance system that it was supposed to help eradicate: bankruptcies related to high medical bills and other healthcare-related costs.

The Consumer Bankruptcy Project (CBP) examined 910 bankruptcies that were filed between 2013 and 2016 and found that, similarly to before the ACA was passed in 2010, 66.5 percent of the bankruptcies were brought about by medical bills families were unable to afford or income loss due to illnesses.

"Unless you're Bill Gates, you're just one serious illness away from bankruptcy." —Dr. David Himmelstein

About 530,000 American households continue to see their finances wiped out each year due to medical costs, according to the report, which was published in the American Journal of Public Health.

"Unless you're Bill Gates, you're just one serious illness away from bankruptcy," said Dr. David Himmelstein, the study's lead author. "For middle-class Americans, health insurance offers little protection. Most of us have policies with so many loopholes, copayments, and deductibles that illness can put you in the poorhouse. And even the best job-based health insurance often vanishes when prolonged illness causes job loss—just when families need it most."

The only solution to medical bankruptcies is a Medicare for All system, said Physicians for a National Health Plan (PNHP), one of several national organizations that have led the fight for universal, government-funded healthcare for decades.

"The ACA was a step forward, but 29 million remain uncovered, and the epidemic of under-insurance is out of control," said Dr. Steffie Woolhandler, a member of PNHP's Board of Directors, in a statement. "We need to move ahead from the ACA to a single-payer, Medicare for All system that assures first-dollar coverage for everyone."

The study came out a day after the Commonwealth Fund released its own findings on the post-ACA healthcare system—namely, that more Americans with employer-based healthcare plans are under-insured, without continuous coverage all year, than were before the law was passed.

Medical bills contributed to about 58 percent of bankruptcies between 2013 and 2016, while income loss due to illnesses or injuries were to blame for about 44 percent; many bankruptcy filers cited both as causes. The study's results were "virtually unchanged" from a similar report the CBP compiled from 2001 to 2007, PNHP said.

The report "found no evidence that the ACA reduced the proportion of bankruptcies driven by medical problems: 65.5 percent of debtors cited a medical contributor to their bankruptcy in the period prior to the ACA’s implementation as compared to 67.5 percent in the three years after the law came into effect," PNHP said in a statement.

On social media, PNHP pointed out that the high prevalence of medical cost-related bankruptcies was often cited as a reason to urgently pass the ACA during congressional debates over the the law in 2010.

President Obama often talked about reducing medical bankruptcies as one of the goals of the Affordable Care Act. https://t.co/sLqwMWFrsS pic.twitter.com/L5vPrwgg4O

Medicaid expansion under the ACA also did not improve the number of medical-related bankruptcies, the report showed, with people filing even in states that expanded the program. Middle-class households made up most of the filers, owing to skyrocketing premiums and copays for many.

On PNHP's Twitter feed, one user shared a firsthand account of how the ACA has made health coverage more expensive for many American families—and thus put just as many people at risk for medical bankruptcy as there were before the law was passed.

I'm self employed. The ACA initially doubled our insurance cost (we're Family Glitch victims), then tripled it. Last three years I've been uninsured because it is completely unaffordable. We, everyone needs #SinglePayer #MedicareForAll @AllOnMedicare @KamalaHarris @BernieSanders

The ACA has also been left vulnerable to attacks from President Donald Trump and the Republican Party due to its high costs for families, noted Woolhandler.

Instead of moving toward a Medicare for All system, she said, "The Trump administration and Republicans in several states are taking us in reverse: cutting Medicaid, threatening to gut protections for the more than 61 million Americans with pre-existing conditions, and allowing insurers to peddle stripped-down policies that offer no real protection."

Bankruptcy can provide relief for families, study co-author Robert Lawless said, but like the relief the ACA provided to many Americans who were able to sign up for insurance after the law was passed, bankruptcy is a temporary and insufficient fix.

"Bankruptcy may provide a fresh start, but it comes at a high financial and emotional cost for those who file," Lawless said. "Filing for bankruptcy can stop the financial bleeding that the healthcare system imposes, but curing that system's ills is the only lasting solution."

Because of people like you, another world is possible. There are many battles to be won, but we will battle them together—all of us. Common Dreams is not your normal news site. We don't survive on clicks. We don't want advertising dollars. We want the world to be a better place.But we can't do it alone. It doesn't work that way. We need you. If you can help today—because every gift of every size matters—please do.