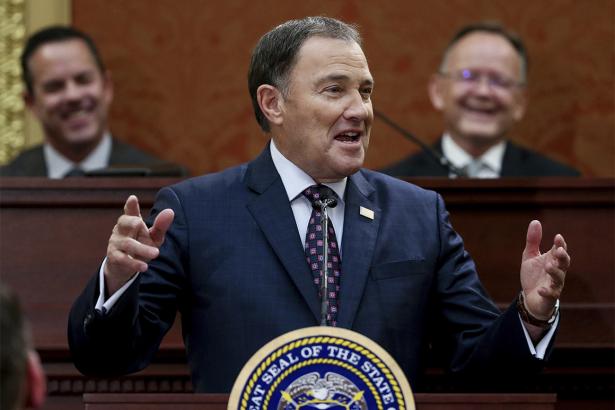 Utah Gov. Gary Herbert on Monday signed legislation adopting a limited expansion of the state’s Medicaid program, defying voters who in November approved the full Obamacare program through the ballot.

Under the new GOP-written plan, Utah will ask the Trump administration for permission to implement unprecedented restrictions on the health coverage program for the poor, while insuring about 60,000 fewer people than the Obamacare expansion would have and initially costing the state tens of millions of dollars more.

Herbert, in a statement, said the legislation "balances Utah's sense of compassion and frugality."

"It is now time to set aside differences and move forward to get those in greatest need enrolled on Medicaid and on the federal health care exchanges," he said.

Critics decried the legislation. “The legislature is trampling on the clear will of voters, and it’s stripping tens-of-thousands of Utahns of access to care in the process,” said Jonathan Schleifer, executive director of the Fairness Project, a labor-aligned group that helped bankroll the successful ballot measure last fall. “It seems many members have forgotten they’re supposed to work for the people of Utah — not special interests or extreme ideologues.”

The Utah law marks the second time Republican leaders have blocked ballot measures approving Medicaid expansion in states that had long refused the program. For more than a year, former Maine Gov. Paul LePage fought a 2017 ballot measure ordering the state to expand coverage to 70,000 low-income adults, and the program only took effect after his Democratic successor Janet Mills took office last month.

Utah will ask Trump health officials to approve billions of dollars in additional Obamacare funds for Medicaid despite not covering the law’s entire expansion population. The state will also ask the administration to approve enrollment caps if program costs exceed expectations. The federal government has never approved either idea, and Obamacare supporters say the state is making a risky gamble on a plan that could flout federal Medicaid law.

However, it’s still possible Utah could later fully expand Medicaid. If the Trump administration refuses the state’s plan, the legislation includes a trigger automatically adopting the Obamacare expansion while adding requirements for some enrollees to work or remain on workplace health insurance coverage if available.

Patient groups and Democrats waged an intense campaign to pressure Republican lawmakers to accept the traditional Medicaid expansion, which was supported by 53 percent of voters in November. The ballot measure called for expanding Medicaid to roughly 150,000 adults starting April 1.

Republican lawmakers argued Utah cannot afford Medicaid expansion, even as they approved a plan that will cost more initially — before the state could potentially receive enhanced Obamacare funding from the federal government. The current Utah plan will cover about 90,000 people, and it will cost the state $49 million more than traditional expansion in the first two years. Poor adults earning just above the poverty line, who would otherwise be enrolled in Medicaid expansion, are eligible to receive generous Obamacare subsidies to purchase private coverage.

Herbert and Republican lawmakers in Utah have insisted that the Trump administration will approve the enrollment limits and boosted federal funding the state is requesting through a waiver. Herbert said he has discussed the plan with Seema Verma, the administrator of the Centers for Medicare and Medicaid Services, and other federal health officials.

CMS declined to comment on the Utah proposal, saying it does not discuss pending waiver applications. It will likely take months for the federal Medicaid agency to review Utah's request.

Obamacare advocates last November also mounted successful Medicaid expansion ballot campaigns in two other red states, Idaho and Nebraska, However, local lawmakers there haven’t yet agreed on how to fund their states' share of program costs.

The federal government covers at least 90 percent of the costs for Medicaid expansion enrollees, a much more generous rate than it pays for the traditional Medicaid program covering children, pregnant women and people with disabilities.

Rachana Pradhan is a health reporter for Politico.  She can be followed on Twitter @rachanadixit