The Green New Deal is not perfect but it’s all we’ve got to credibly address the existential climate change crisis at a national level. And despite its imperfections it does include a powerful provision to protect the indigenous people of the U.S. 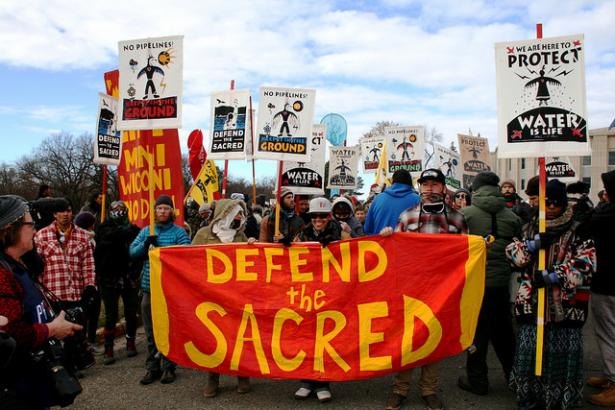 In 2016 a powerful movement emerged against the construction of the Dakota Access Pipeline, through land vital to Native communities, especially the Standing Rock Sioux., Flickr/Leslie Peterson

The Green New Deal is no perfect solution to climate change. It’s already facing backlash from Republicans and centrists, but it’s all we’ve got right now to realistically address the existential crisis at a national level. And despite its imperfections—it lacks explicit language around ending fossil fuels, for instance—the Green New Deal does include a powerful provision to protect the indigenous people of the United States.

While the resolution introduced by Representative Alexandria Ocasio-Cortez last week calls for protections for many historically marginalized communities, it really goes the extra mile toward attempting to ensure another Standing Rock-versus-Dakota Access Pipeline situation never happens. The resolution states a goal of:

The call for “free, prior, and informed consent” is no little thing. And this language didn’t wind up in the resolution by accident.

Indigenous leaders across the country provided their input. Ocasio-Cortez reached out to groups like the Climate Justice Alliance, which includes the Indigenous Environmental Network (IEN), and Honor the Earth, an indigenous-led environmental nonprofit, for consultation in preparing the Green New Deal resolution.

“For too long, indigenous people have been hurt first and worst by fossil fuel extraction and climate change,” said Sunrise Movement Executive Director Varshini Prakash, a key partner in this proposal, in a statement to Earther. “Fuel billionaires have used their political power to trample over indigenous rights and sovereignty. That is wrong. The Green New Deal must also ensure that indigenous people are involved as partners in planning the transition to renewable energy to ensure it is just and equitable.”

The Green New Deal is supposed to be all about justice and equity. Meeting with the frontline communities that experience firsthand the impacts of the fossil fuel industry—from pollution to the abuse of Native women by so-called man camps established during energy development—is key to creating an equitable and just policy.

“You have to really make sure you are listening to [environmental justice] groups as you develop this,” said Dallas Goldtooth, a campaign organizer with IEN, to Earther.

That doesn’t mean all groups are 100 percent happy with the final text, but Goldtooth said folks are pleased to see language around tribal consent wind up in the resolution, something IEN “strongly pushed” for.

This language may be rare in federal policy, but “free, prior and informed consent” is the exact language that the United Nations includes in its Declaration on the Rights of Indigenous Peoples. For years, indigenous people around the world have been demanding such consent from states when those states are greenlighting pipeline projects or permitting the destruction of the rainforests they call home. And it’s a demand that policymakers should really begin paying attention to if they want to avoid future conflicts with tribal nations—with or without a Green New Deal.

A lack of consent is a big part of what led to the Standing Rock protests in North Dakota. The Standing Rock Sioux Tribe didn’t want a 1,172-mile long crude oil pipeline running near its reservation (and on its traditional sacred lands). It claims the company behind the Dakota Access Pipeline, Energy Transfer Partners, did not properly consult the tribe on the project. And when that moment finally arrived, that consultation was, well, bullshit.

“What consultation meant for them was that the bulldozers were outside the front door before they were even approached on the project,” said Goldtooth, speaking of Standing Rock, a battle he supported on the ground in 2016. “That’s not an adequate way to work with the tribal nations who are older than America. Consent is a recognition of our inherent right to exist on our own terms as tribal nations. Consent is a recognition of our self-determination over our lands, our air, our water, and our bodies.”

Now, Goldtooth is not naive. He imagines this piece of the resolution will be one of the first to be erased come negotiation time. But the goal is to normalize this kind of language so that people aren’t so taken aback when they see it in the future.

“The more we talk about ‘free, prior, and informed consent’ in this country, it gives us more opportunity to make that a reality,” Goldtooth told Earther. “The more we make it normal, the more we make it a talking point that congressional leaders have to speak on and respond to. Then, it makes our fight for indigenous rights a little bit easier. That’s the hope.”

Others are a little more optimistic. Winona LaDuke, executive director of Honor the Earth who also reviewed the document, is celebrating the Green New Deal, especially the inclusion of this text.

“The more we talk about ‘free, prior, and informed consent’ in this country, it gives us more opportunity to make that a reality.”

The Green New Deal has got a long way to go, but indigenous groups are hopeful they can count on representatives like Ocasio-Cortez and Representative Deb Haaland, one of the first Native American women in Congress who supports the Green New Deal, to hold them down.

“Communities of color are disproportionately affected by climate change,” said Haaland in a statement sent to Earther. “That’s why one of the most important aspects of delivering a Green New Deal for America is making sure that the transition to a renewable economy is equitable and benefits all communities. Making sure provisions in the Green New Deal have language that includes Tribal consultation is part of respecting the status they have as required by law.”

Tribal nations are sovereign bodies. For too long, the U.S. government has ignored that fact, but a Green New Deal could bring them one step closer to securing the recognition they deserve.

[Yessenia Funes is a staff writer for Earther/Gizmodo, focusing on how environmental policy and climate change intersect with race and class. She can be reached at yessenia.funes@gizmodomedia.com or via twitter at https://twitter.com/yessfun.]