Israeli politics during the successive Netanyahu governments has become a parade of hate speech, with right-wing politicians competing over who will do the worst to “the Arabs.” 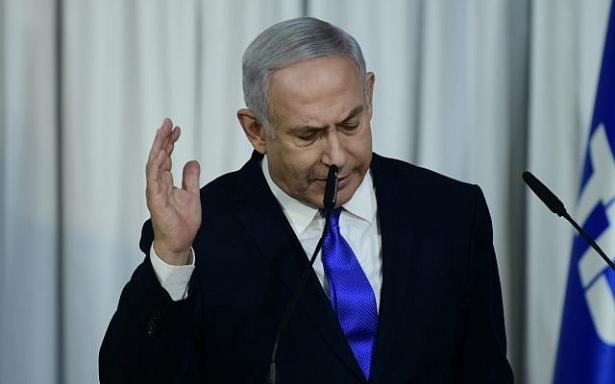 Much like Donald Trump’s election, the merger between the right-wing settler Jewish Home party and the Kahanist Otzma Yehudit — encouraged and facilitated by Prime Minister Netanyahu — marks less a break with the status quo than its unmasking.

There was once a time when even Likud members felt obligated to object to the Kahanists’ explicit, violent racism; for instance, in the 1980s, when Brooklyn-born rabbi Meir Kahane would take the Knesset podium, Likud MKs would exit the hall. (Kahane and his party were later banned from parliamentary politics for racist incitement). Those days are long gone.

For years, the men who make up Otzma Yehudit — Baruch Marzel, Itamar Ben Gvir, Benzi Gopstein, Michael Ben-Ari — stalked the outer limits of Israeli political discourse. But what distinguished them from the rest of the right was not so much substance as style; to borrow New York Times columnist Jamelle Bouie’s phrase about President Trump, they took the subtext of the right’s agenda and made it text.

They said loudly what many on the Israeli right, at least in the past, preferred to whisper, and certainly never to say in English: that Israel would be a Jewish supremacist state, not a democracy; that the Palestinians would forever live subjugated under military occupation, confined to isolated Bantustans, or they would be expelled from the West Bank and into Jordan; that leftists and peaceniks were traitors, and that traitors would be dealt with accordingly.

Today, even without Otzma Yehudit, there is no shortage of Knesset members — ministers in Netanyahu’s outgoing government — who say these sorts of things. For example, Miri Regev, Israel’s culture minister, joined Otzma Yehudit’s Michael Ben-Ari in inciting a vicious pogrom against African asylum seekers in South Tel Aviv in 2012.

Naftali Bennett, minister of education and the diaspora, boasts of how many people he’s killed and has a plan to annex large portions of the West Bank.

Betzalel Smotrich, deputy speaker of the Knesset, calls himself a “proud homophobe” and proposes paying Palestinians compensation for trucking them out of the West Bank and into Jordan.

Then there is Avigdor Liberman, the former minister of Defense, with a long history of inflammatory racist comments, who proposed transferring Palestinian citizens of Israel into the West Bank and once remarked of Arab MKs, “there is no reason for them to remain Israeli citizens.”

Israeli politics during the successive Netanyahu governments has become a parade of hate speech, with right-wing politicians competing over who will do the worst to “the Arabs.” During the Likud primaries, Yaron Mazuz, the deputy minister of the environment, even campaigned with the proud endorsement of Elor Azaria, the Israeli soldier jailed for nine months for shooting an incapacitated Palestinian assailant in the head.

It is hardly surprising, then, that Netanyahu sought an alliance with the far-right, Kahanist Otzma Yehudit, and his own Likud: the rhetoric of the two parties is increasingly indistinguishable. Likud, nominally a center-right party, has lurched far to the right, and not just in rhetoric but also in policy. Last year, the party’s central committee unanimously voted in favor of annexing parts of the West Bank.

Confronted with this “great moving right show,” to use British theorist Stuart Hall’s words, how has the American Jewish establishment responded? Mostly with silence.

When critics voiced concern over Israel’s direction, Jewish establishment organizations smothered them with hasbara talking points about Israeli “democracy.” At nearly every opportunity to confront the dangerous trends in Israeli political culture — trends that have also seeped into American Jewish communities — establishment Jewish organizations preferred to divert the conversation or accuse honest, well-meaning critics of “unfairly singling out Israel” or of “maintaining a double standard.”

The Jewish Home — Otzmah Yehudit merger, with which Netanyahu’s Likud signed a vote-sharing agreement, did not come out of nowhere. It is the culmination of trends in Israeli politics that could have been prevented if the American Jewish establishment had been willing to look reality — with all its ugliness and violence — in the face.

Indeed, AIPAC and the AJC’s statements denouncing Otzma Yehudit exemplify the fecklessness of the Jewish establishment’s response to the Israeli far right. AJC’s statement did not even mention Benjamin Netanyahu, who personally intervened to put Otzma Yehudit on the path to the Knesset. And if these organizations are, in fact, willing to speak out against explicit racism and violence in Israeli politics, why did it take them until now? It is all much too little, much too late.

There are two plausible explanations, one more discomfiting than the other. The first is willful ignorance: that Jewish communal leaders have sensed the fascistization of Israeli politics but have preferred to look away, incapable of coming to terms with just how much Israel has changed since Yitzhak Rabin’s assassination. This is the generous explanation, which recognizes how difficult it must be — the grief and even trauma involved — for Jews of a certain generation to reckon with what Israel has become today.

The second is that the Jewish communal leadership has become openly supportive of the Israeli far right. After all, the American Jewish establishment could only deflect and defend Israel’s rightward swing for so long before its leaders came to believe what the Israeli far-right believes.

It is no secret that the growing extremism in Israel has paralleled, and in turn influenced, the Trumpianization of the American Jewish community, particularly its more traditionally observant segments. The Trump administration has elevated some of the most right-wing voices within the American Jewish community, but they would not have been poised for this rise if the rest of the Jewish establishment had not accommodated, and at times, encouraged them.

No one exemplifies this better than Ambassador David Friedman, whose rhetoric — calling JStreet “worse than kapos” — mirrors the kind of rhetoric popular on the Israeli right. Indeed, Friedman’s method of responding to Israel’s critics — to defame and delegitimize — has become the norm within an American Jewish establishment that is committed to ruthlessly quashing any criticism of Israel.

After Benjamin Netanyahu’s endorsement of a group of unrepentant terrorists, the American Jewish establishment no longer has any plausible deniability. But if AIPAC’s enthusiastic embrace of Netanyahu just days after the Otzma deal is any indication, the American Jewish establishment has no intention of assuming any kind of moral responsibility. Instead, they have chosen to do the opposite, once again providing cover for the mainstreaming of racism, bigotry and violence.

Joshua Leifer is an associate editor at Dissent Magazine. His pieces have been published in Haaretz, The Nation, n+1, Jacobin, and Jewish Currents.

The views and opinions expressed in this article are the author’s own and do not necessarily reflect those of the Forward.
Subscribe to Portside