Apartheid Road: ‘the Borders of Our Own Bantustans’

‘This new road is a curse.’ The construction of Route 4370 is part of the ‘Greater Jerusalem’ project that aims to integrate the city with some colonies in the surrounding area, turning them into Jerusalem’s suburbs. But it’s also isolating Palesti 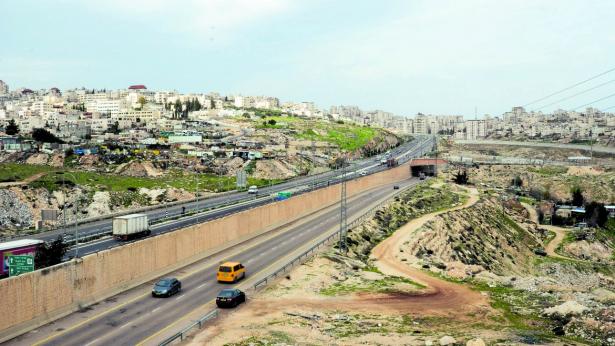 It is not easy to reach Route 4370 from the center of Jerusalem. Heading northeast, after the Israeli settlement on French Hill, you have to turn in the direction of Jericho. You leave the buildings of all shapes and sizes of the Palestinian refugee camp of Shuaffat, built on top of one another, to your left, and take the a-Tur exit. Finally, after passing through streets almost devoid of all signage, you reach an opening in the concrete wall, which Israel built around the whole of Jerusalem, including its eastern, Arab part, occupied in 1967.

A large, newly installed metal sliding door is open for those who come from Jerusalem, but remains closed for those who live in the occupied West Bank. Since a few weeks ago, it has been an obstacle in the daily lives of tens of thousands of Palestinians. It is manned by the Israeli police.

On the other side of it lies Route 4370, linking the Tel Aviv-Jerusalem national road to the colony of Geva Binyamin. The Israeli authorities are calling it a “ring road” that would allow traffic to flow smoothly at the eastern entrance to Jerusalem. However, for the Palestinians, as well as for Jewish activists against the occupation, Route 4370 is rather the “apartheid road” par excellence, the proof of Israel’s intentions to develop two segregated road networks: one for the Palestinians under occupation and another for the Israelis. If one looks at the plan for Route 4370 from above, it is hard to see what else it could be called.

The road, first planned in 2005 and whose construction had been discontinued in 2017, runs for about 5 km and has two lanes, separated by a high concrete wall, in some places up to eight meters tall. The west lane is accessible only to Palestinians, while the east lane is for the exclusive use of Israelis. It allows the Israeli colonists living in the settlements south of Ramallah to enter Jerusalem more easily, bypassing the military checkpoint near the village of Hizma.

Mazen Malhi, a street vendor, has opened up a stall on Route 4370 for the past few days, selling coffee and tea to motorists, who are almost all driving vehicles with white license plates, registered by the Palestinian National Authority. “Every now and then, cars and trucks pass by with yellow-number [Israeli] plates—but they are not Israelis, they are Palestinians from Jerusalem who work or live here, in the West Bank,” he explains as he serves me hot coffee.

Behind me, on the other side of the dividing wall between the two lanes, cars belonging to Israelis whiz by at high speed on the way to Jerusalem. “This new road is a curse,” says Mazen, who was born and raised in the Shuafat refugee camp. “Those who live in this area, if they want to enter Jerusalem, they not only need to have a permit issued by the army, but also need to go 10 km on the way to and 10 km on the way back. But Jerusalem is right here, above our heads. You can walk there in half an hour.”

The Palestinians living in the el Azzariye suburb are in the same situation. They live on the outskirts of Jerusalem, and the golden-domed mosque, the international symbol of the city, looks so close from the roofs of their houses. However, after the construction of the wall, which began 17 years ago, the inhabitants of el Azzariye need to travel around 12 km to reach Jerusalem, going around the wall and the Maale Adumim colony—the largest in the West Bank, and to which Israel might soon extend the metropolitan area ​​of Jerusalem.

“The Palestinians will pay a very high price for Route 4370. Several villages close to the city will remain totally isolated,” warns the Ir Amim NGO, which is fighting for an open Jerusalem to both Israelis and Palestinians, without restrictions.

The construction of Route 4370 is part of the “Greater Jerusalem” project that aims to integrate the city with some colonies in the surrounding area, turning them into Jerusalem’s suburbs. The Israeli Minister of Public Security, Gilad Erdan, is proud of the new road, which comes at a cost of around €9 million. According to him, it is “an example of our ability to create common ground between Palestinians and Israelis, keeping in mind the current challenges in the field of security.”

For Yisrael Gantz, the Chairman of the Regional Council representing 40 Israeli settlements, Route 4370 is “the solution for Israelis who work, study and get their entertainment in Jerusalem.” The Palestinians, however, are not finding it quite as entertaining. The B’Tselem Center, which fights for human rights in the Occupied Territories, says that “road segregation” is now coming for tens of thousands of people living under occupation.

Jamal Jumaa, coordinator of the Stop the Wall campaign, expressed his dismay: “With this road, Israel is proving that it is imposing an apartheid regime.” Route 4370, he adds, “is the logical continuation of the Apartheid Wall project [the barrier built by Israel in the West Bank since 2002]. The whole system of the wall, roads, settlements, closed areas, represents the borders of our own Bantustans.”

Jumaa stresses that the new road is a development that is part of the Israeli plans for the expansion and construction of settlements in the E1 strategic area, east of Jerusalem. If brought to fruition, these plans will split the West Bank into two, nullifying the last remnants of the possibility of building a Palestinian state with a contiguous territory and with the East Jerusalem area as the capital.

Even worse, these plans are also leading to the announced expulsion of the Bedouin community that has been living in the E1 area for decades, in particular the inhabitants of Khan al Ahmar; demolition orders have also been presented to Palestinian families in Anata. Until two years ago, the United States, Israel’s closest ally, opposed the development of projects in E1. The Trump administration, however, has changed course, and, by recognizing Jerusalem as the capital of Israel, has effectively given the green light to Israeli plans for the future of the city that had remained frozen for years.

Two weeks ago, dozens of Palestinian and Jewish activists blocked Route 4370 for some minutes, until the intervention of the Israeli police. They raised a banner that read, in Arabic, Hebrew and English, “No to apartheid, no to annexation.” However, that seems to have been the last of the protests. In the face of the imminent opening of the “apartheid road,” the “international community” has chosen to close its eyes and remain silent.