As Many as 5 Socialists Could Join Chicago City Council 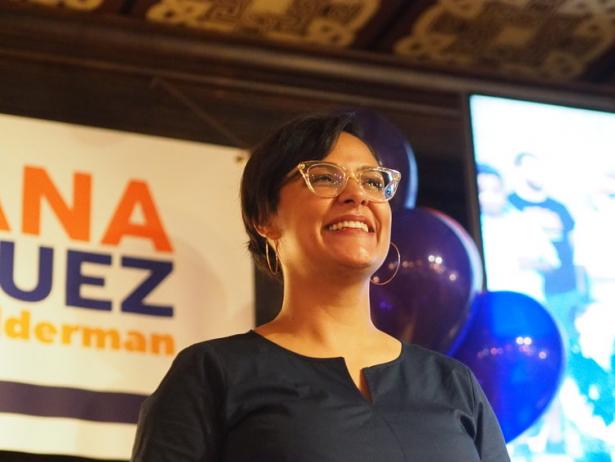 If their success on Tuesday carries over to the April runoff election, as many as five members of the Democratic Socialists of America could be on the Chicago City Council — the most in more than a century.

Two won aldermanic seats outright. Three others made the runoffs.

“The oligarchs are shaking in their boots tonight,” Ald. Carlos Ramirez-Rosa (35th) told supporters Tuesday at Puebla Restaurant celebrating his re-election over challenger Amanda Yu Dieterich. “Our continued organizing and movement-building over the last four years is paying dividends. And it appears to be a total transformation of political power at City Hall from the bottom up.”

Rosa is one of the two members of the Chicago Democratic Socialists of America who got the majority vote needed to win without a runoff. The other, Daniel La Spata, upset Ald. Proco “Joe” Moreno in the Near Northwest Side’s 1st Ward.

Socialist Rosanna Rodríguez-Sánchez will be in April’s runoff against incumbent Ald. Deb Mell (33rd). Rodríguez-Sánchez broke into tears at her election-night party at Chief O’Neils in Avondale after hearing she’d gotten the most votes in a three-way race.

“Chicago had a way of doing politics, and I feel like that died tonight,” Rodríguez-Sánchez said. “I’m very very confident that I’m going to win” in April.

Byron Sigcho-Lopez, who heads the Pilsen Alliance, credited the socialist organization — which says it’s not a party but instead a “political and activist organization” — with helping him in the race for the seat vacated by retiring Ald. Danny Solis (25th). Sigcho-Lopez will face Alex Acevedo in the runoff.

“DSA members were instrumental, and I’m thankful to the volunteers who spent hundreds — thousands — of hours campaigning,” Sigcho-Lopez said. “We’ve had a rubber-stamp City Council beholden to corporate interests, and that’s why the DSA candidates resonated with people.”

Andre Vazquez, who joined the socialists in June, will be in the runoff against 35-year incumbent Ald. Pat O’Connor (40th). O’Connor took over the powerful finance committee after Ald. Edward Burke was charged in January with trying to extort a Burger King owner.

Rosa, who turned 30 in February, had been DSA’s only elected official in Chicago.

Macias said the group supports rent control and having an Chicago school board and opposes plans to build a new police academy in Garfield Park. Nationally, the group backs “Medicare for all.”

The successes of the socialist group’s council candidates set off a raucous celebration at a Chicago watch party at the Logan Square offices of the magazine In These Times, where updates on Tuesday’s vote prompted whoops and swigs from bottles of Malort that were being passed around.

Having even two socialist alderman in Chicago is the most since the 1910s, when voters elected several aldermen who belonged to the Socialist Party founded by Eugene V. Debs, an Indiana native who rose to fame for his role in the Pullman porters strike and ran for president five times, including a 1912 campaign in which he got 900,000 votes — or 6 percent of the popular vote.

The DSA’s success in Chicago mirrors a surge in membership since avowed democratic socialist Bernie Sanders’s 2016 presidential campaign and the election of Trump. Sanders, who also plans to run for president in 2020, will be in Chicago to speak at Navy Pier on Sunday.

After claiming roughly 5,000 members in 2015, the group says there are now about 60,000 card-carrying DSA members nationwide and about 1,300 among three Chicago chapters.