Why Can’t We Close the Racial Wealth Gap?

A new study says that income inequality, not historic factors, feeds the present-day gulf in wealth between white and black households. 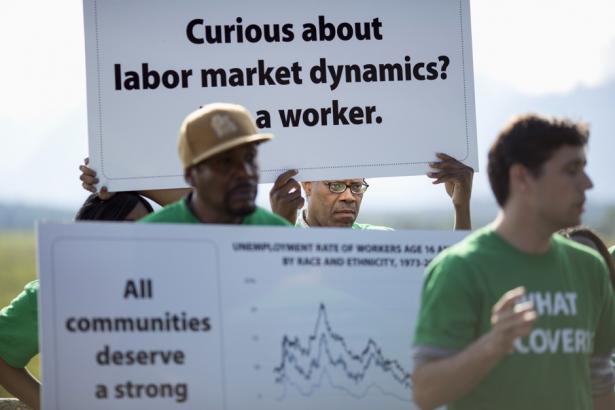 Derek Laney of St. Louis protests during the Jackson Hole Economic Policy Symposium in Jackson Hole, Wyoming August 21, 2014. Laney joined workers from a coalition of organizations and travelled to Jackson, Wyoming to tell his story of income inequality, David Stubbs/Reuters

If the college cheating scandal has reinforced anything, it’s that one of the primary advantages of being wealthy is that the wealthy can buy more advantages. This helps explain why African Americans, who’ve historically been denied wealth, lag in almost every category of society behind whites, who have long benefited from capital extracted from black labor and culture. It also helps explain why—despite a “booming” U.S. economy that is nearing full employment—a giganticracial wealth gap remains. On average, white households have nearly 6.5 times the wealth of black households.

That gap can be ameliorated, though, by closing the earnings gulf between black and white workers, according to new research from two economists at the Federal Reserve Bank of Cleveland. In a commentary recently published on the Cleveland Fed website, economists Dionissi Aliprantis and Daniel Carroll argue that racial differences in income drive the wealth gap more than any other factor, including differences in financial savings practices, rates of return on investments, or even intergenerational transfers of wealth.

This runs counter to loads of scholarship pointing to a different explanation of black-white wealth disparities in the U.S.: That narrative holds that white wealth accumulated from the trading and enslavement of Africans, and from the taking of black-owned property was passed down to white children and grandchildren. Government policies such as racial housing covenants, redlining, financial handouts for white war veterans, and highway expansionsprovided additional wealth expansion for white families while providing net-zero wealth opportunities for African Americans. Aliprantis and Carroll acknowledge this narrative as the initial conditions for how wealth began developing across divergent black and white paths.

But it only explains “snapshot(s) in time,” reads their commentary. For their current study, they examined the “dynamic nature of wealth accumulation” over time. Using these dynamics, they argue that starting in the 1960s, the initial conditions that birthed the black-white gap—slavery, redlining, etc.—began diminishing as the drivers of the wealth disparity. Reads their commentary:

What do we mean when we say that the labor income gap can account for the racial wealth gap? First, our model predicts that income and wealth will have a relationship in the future like the one we observe today. Our model predicts that, starting from 1962, it would take 259 years for the ratio of black and white mean wealth to reach 0.90.

Third, other factors we might have suspected as playing major roles in maintaining the racial wealth gap pale in comparison to the role of the labor income gap. For example, when our model makes predictions under a gap in returns to investment as large as the gap in labor income, we find little change. The same is true for equalizing the inheritance process.

In other words, while all those initial conditions—from slavery to passing down slavery’s profits—may have created the wealth gap, it’s unequal income that has kept that gap alive from 1962 until today.

According to Aliprantis, focusing solely on the initial conditions of the racial wealth gap leaves unresolved a “puzzle” about the relationship between income and wealth: African Americans earned more and accumulated more wealth in the years since 1962 than ever before in history. But the black-white wealth gap has barely budged.

“I don’t imagine a world where you could simply close the income gap and everything else just falls into place.”

“When we started working on this research, the puzzle around income and wealth suggested to us very strongly that we should focus on dynamics, [meaning] changes over time,” said Aliprantis. “So the question we pose is: Assuming black and white households are the same, except that black households start out with way less wealth and have lower incomes, what kind of relationship would we expect to observe between income and wealth by race? Is it consistent with what we see in the data?”

Under the hypothetical scenario used in their model, wherein no income gap exists since 1962—meaning all things equal in payscale between blacks and whites—they claim that the wealth gap likely would have mostly been closed by 2007. That’s because their model predicts that by 1977 the labor income gap has become a stronger contributor to the wealth gap than the initial conditions, and then accounts for more than 80 percent of the wealth gap by 1990, as visualized in the chart below. 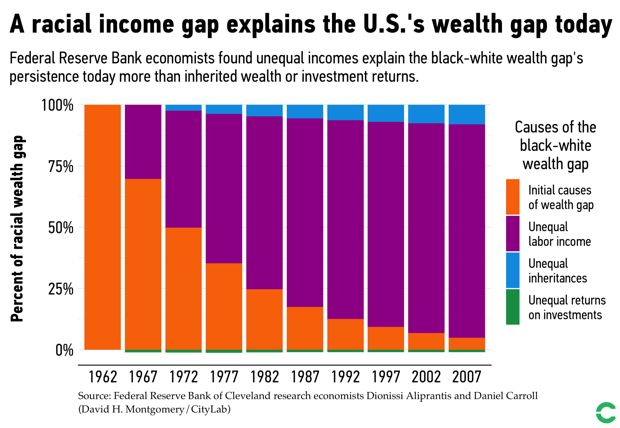 It can’t be overemphasized that much of the scholarship on the racial wealth gap denies that income is a major factor. Instead, it insists that wealth inheritance and higher education fuel inequality. Less than four years ago, Federal Reserve economists were pointing to homeownership as the primary driver of the wealth gap.

What can’t be denied is that a wage gap exists, persists, and appears to be worsening. According to the 2018 State of Working America Wages report from the Economic Policy Institute, the wages for white workers grew much faster than wages for black and Hispanic (EPI’s term) workers since the year 2000, and this was true from the lowest- to the highest-earning workers. Other findings from the report:

Valerie Wilson, director of EPI’s Program on Race, Ethnicity, and the Economy, says that while it’s important to close these wage and income gaps, she’s skeptical of how effective that could be in slaying the more racial wealth goliath.

“I don’t imagine a world where you could simply close the income gap and everything else just falls into place,” said Wilson. “Even when we look at dimensions of the wealth gap, such as looking at education levels: If we presume that education is closely tied to job and wages, then we should see narrower wealth gaps. But we don't. In fact, it shows that African Americans with a college degree still have less wealth than white families where the head dropped out of high school. That challenges the idea that if we close the income gap then everything would be equal.”

Designs on a federal jobs guarantee are afloat while Senator Cory Booker, a U.S. presidential hopeful, has introduced legislation to create “opportunity accounts”—baby bonds of sorts where newborns would be provided savings accounts seeded with a $1,000 deposit that would grow with interest until they became adults. Senator Elizabeth Warren, also a presidential contender, has introduced a housing bill that would restore those who lost equity in the mortgage crisis and would correct past housing segregation and redlining sins. And there’s the looming specter of reparations, which several presidential contenders have been eager to discuss.

It’s another question whether any of these proposals alone (except maybe reparations) would go far enough to wipe out the huge gains in wealth that whites have claimed over 400 years compared to all of the potential wealth eliminated from African Americans in that time. Anne Price, president of the Insight Center for Community Economic Development (ICCED), has pushed for the opportunity accounts idea that Booker is promoting for years. She says that, combined with Warren’s housing proposal, could go a long way toward putting a dent in the black-white wealth gap, at least at the median level. However, like Wilson, she finds the project of focusing on income gaps alone a dubious prospect.

“People are looking for that silver bullet to say it’s homeownership, it’s income, and then that will be the solution,” says Price. “That’s very misleading and a bit dangerous because it takes us off course from working on a number of solutions that are needed. The way we talk about the racial wealth gap has been very limiting. The issue is not just about how to help people build wealth. We have to also curtail how wealth is extracted in so many ways—we have to look at things like corporate power, mass incarceration, municipal fines and fees, and how they are directed at communities of color.”

Last year Price’s ICCED organization partnered with researchers at The Samuel Dubois Cook Center on Social Equity at Duke University to produce the report “What We Get Wrong About Closing the Racial Wealth Gap,” which dispels notions that issues such as the racial homeownership gap is the driver of wealth disparities. It also disabuses ideas that African Americans’ personal responsibilities and choices, or improving their financial literacy and entrepreneurship rates would narrow the wealth gap. Or, that black people can educate and work themselves out of the wealth crisis. The report’s analysis suggests that even if African Americans produced more income through opening businesses and buying properties, and then managed that income more astutely, they still would not reach the wealth levels of whites, chiefly because of deeply entrenched structural racism, and discrimination in the workforce and lending industries. Reads the report:

There are no actions that black Americans can take unilaterally that will have much of an effect on reducing the racial wealth gap. … Addressing racial wealth inequality will require a major redistributive effort or another major public policy intervention to build black American wealth. This could take the form of a direct race-specific initiative like a dramatic reparations program tied to compensation for the legacies of slavery and Jim Crow, and/or an initiative that addresses the perniciousness of wealth inequality for the entire American population, which could disproportionately benefit black Americans due to their exceptionally low levels of wealth.

Price adds that even if only discussing the present-day causes and persistence of the black-white wealth gap, there are still critical factors to consider such as who will be considered white in the future. Race, as defined by the U.S. Census Bureau, has historically been a moving target since its beginnings, and not necessarily to African Americans’ advantage. There are some Latino populations that could end up being categorized as white. The EPI “State of American Wages” report is already showing that the wage gap between whites and Latinos has been narrowing over the last 18 years at a far faster clip than the black-white wage gap. 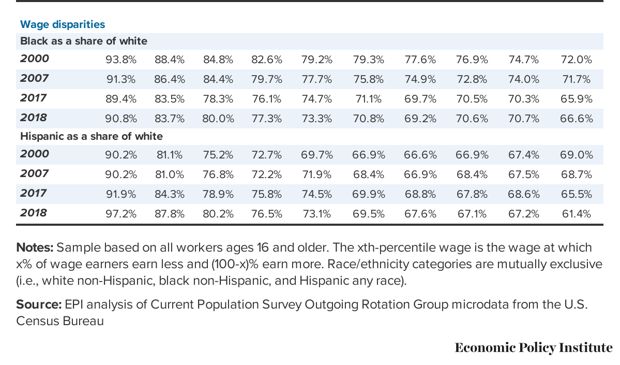 “Whiteness changes; blackness doesn’t change,” says Price. “So when we have these conversations looking 50 to 100 years from now—race is not static. That’s the problem of looking at this solely as an issue of a gap. We have to look at how power is shifting, how power is concentrated, and how a white identity advantages and how that may change over time. These are the questions we need to be asking and not be fixated on just data points that then become drivers for our energy and our solutions.”

Brentin Mock is a staff writer at CityLab. He was previously the justice editor at Grist.