French director Agnès Varda, who died Friday at her home in Paris, was the only woman associated with the new wave during that film movement’s peak. She made films for more than 60 years, and in the latter part of her career focused on documentaries. 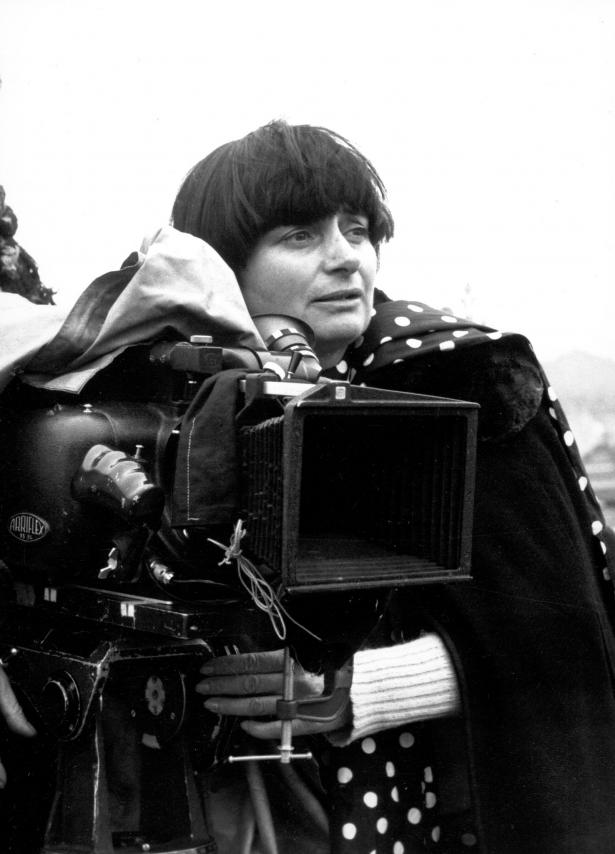 Agnès Varda, a groundbreaking French filmmaker who was closely associated with the New Wave — although her reimagining of filmmaking conventions actually predated the work of Jean-Luc Godard, François Truffaut and others identified with that movement — died on Friday morning at her home in Paris. She was 90.

Her death, from breast cancer, was confirmed by a spokeswoman for her production company, Ciné-Tamaris.

In recent years, Ms. Varda had focused her directorial skills on nonfiction work that used her life and career as a foundation for philosophical ruminations and visual playfulness. “The Gleaners and I,” a 2000 documentary in which she used the themes of collecting, harvesting and recycling to reflect on her own work, is considered by some to be her masterpiece.

But it was not her last film to receive widespread acclaim. In 2017, at the age of 89, Ms. Varda partnered with the French photographer and muralist known as JR on “Faces Places,” a road movie that featured the two of them roaming rural France, meeting the locals, celebrating them with enormous portraits and forming their own fast friendship. Among its many honors was an Academy Award nomination for best documentary feature. (It did not win, but that year Ms. Varda was given an honorary Academy Award for lifetime achievement.)

It was her early dramatic films that helped establish Ms. Varda as both an emblematic feminist and a cinematic firebrand — among them “Cléo From 5 to 7” (1962), in which a pop singer spends a fretful two hours awaiting the result of a cancer examination, and “Le Bonheur” (1965), about a young husband’s blithely choreographed extramarital affair.

Ms. Varda established herself as a maverick cineaste well before such milestones of the New Wave as Mr. Truffaut’s “The 400 Blows” (1959) and Mr. Godard’s “Breathless” (1960). Her “La Pointe Courte” (1955), which juxtaposed the strife of an unhappy couple with the struggles of a French fishing village, anticipated by several years the narrative and visual rule-breaking of directors like Mr. Truffaut, Mr. Godard and Alain Resnais, who edited “La Pointe Courte” and would introduce Ms. Varda to a number of the New Wave principals in Paris.

These included Mr. Truffaut, Mr. Godard, Claude Chabrol and Éric Rohmer, all of whom had gotten their start at the critic André Bazin’s magazine Cahiers du Cinema, and who became known as the Right Bank group. The more politicized and liberal Left Bank group would come to include Mr. Resnais, Chris Marker and Ms. Varda herself.

Arlette Varda was born on May 30, 1928, in Ixelles, Belgium, the daughter of a Greek father and a French mother. She left Belgium with her family in 1940 for Sète, France, where she spent her teenage years. At 18, she changed her name to Agnès.

“I just didn’t see films when I was young,” she said in a 2009 interview. “I was stupid and naïve. Maybe I wouldn’t have made films if I had seen lots of others; maybe it would have stopped me.

“I started totally free and crazy and innocent,” she continued. “Now I’ve seen many films, and many beautiful films. And I try to keep a certain level of quality of my films. I don’t do commercials, I don’t do films pre-prepared by other people, I don’t do star system. So I do my own little thing.”

Her “thing” often involved straddling the line between what was commonly accepted as fiction and nonfiction, and defying the boundaries of gender.

“She was very clear about her feeling that the New Wave was a man’s club and that as a woman it was hard for producers to back her, even after she made ‘Cléo’ in 1962,” T. Jefferson Kline, a professor of French at Boston University and the editor of “Agnès Varda: Interviews” (2013), said in an interview for this obituary. “She obviously was not pleased that as a woman filmmaker she had so much trouble getting produced. She went to Los Angeles with her husband, and she said when she came back to France it was like she didn’t exist.”

Ms. Varda was married to the director Jacques Demy (“Lola,” “The Umbrellas of Cherbourg”) from 1962 until his death in 1990. From 1968 to 1970 they lived in Hollywood, where Mr. Demy made “Model Shop” for Columbia Pictures and Ms. Varda made “Lions Love,” which married a meditative late-’60s Los Angeles aesthetic to the New York counterculture. (The cast included the Warhol “superstar” Viva; Gerome Ragni and James Rado, the writers of the book for the musical “Hair”; and the underground filmmaker Shirley Clarke.) During that same period, she shot the short documentary “Black Panthers” (1968), which included an interview with the incarcerated Panther leader Huey Newton; commissioned by French television, it was suppressed at the time.

It was also during that period that she befriended Jim Morrison, the frontman of the Doors, who visited her and Mr. Demy in France; according to Stephen Davis’s “Jim Morrison: Life, Death, Legend” (2004), she was one of only five mourners at Mr. Morrison’s funeral in the Père Lachaise cemetery in Paris in 1971. That same year she became one of the 343 women to sign the “Manifesto of the 343,” a French petition acknowledging that they had had abortions and thus making themselves vulnerable to prosecution.

In 1972, the birth of her son, Mathieu Demy, now an actor, prompted Ms. Varda to sideline her career. He survives her, as does the costume designer Rosalie Varda Demy, Ms. Varda’s daughter from a previous relationship, who was adopted by Jacques Demy.

“Despite my joy,” Ms. Varda told the actress Mireille Amiel in a 1975 interview, “I couldn’t help resenting the brakes put on my work and my travels.” So she had an electric line of about 300 feet for her camera and microphone run from her house, and with this “umbilical cord” she managed to interview the shopkeepers and her other neighbors on the Rue Daguerre. The result was “Daguerréotypes” (1976).

In 1977 she made what she called her “feminist musical,” and one of her better-known films, “One Sings, the Other Doesn’t,” which also seemed inspired by personal circumstance.

“It’s the story of two 15-year-old girls, their lives and their ideas,” she told Ms. Amiel. “They have to face this key problem: Do they want to have children or not? They each fall in love and encounter the contradictions — work/image, ideas/love, etc.”One of Ms. Varda’s more controversial films, because of its casting, was “Kung-Fu Master!” (1988), a fictional work about an adult woman — played by the actress Jane Birkin, a friend of Ms. Varda’s — who falls in love with a teenage boy, played by Ms. Varda’s son. The title — it was changed in France to “Le Petit Amour” — referred to the young character’s favorite arcade game. The film was shot more or less simultaneously with “Jane B. par Agnes V.,” another of Ms. Varda’s border crossings between fact and fiction, which she called “an imaginary biopic.”

After Jacques Demy’s death, Ms. Varda made three films as a tribute: the biographical drama “Jacquot de Nantes” (1991) and the documentaries “Les Demoiselles Ont Eu 25 Ans” (1993), about the 25th anniversary of Mr. Demy’s “The Young Girls of Rochefort,” and “L’Univers de Jacques Demy” (1995).

Ms. Varda was then relatively inactive until 1999, when, armed for the first time with a digital camera, she set about making “Les Glaneurs et la Glaneuse” (“The Gleaners and I”), which resurrected an artistic career now well accustomed to underrappreciation and resuscitation.

“She was a person of immense talent, but also enormously thoughtful,” said Mr. Kline of Boston University. “When you look at some of the films you might think they were more spontaneous than thought out. A film like ‘Cléo,’ for instance, you might have said, ‘O.K., she just follows Cléo around Paris,’ but the film is extremely beautifully imagined and thought out beforehand.”

In “Vagabond,” an 1985 film in which Sandrine Bonnaire plays a woman who is found dead and whose life is recounted, often in documentary style, “the traveling shots in the film are always ending, and each subsequent shot beginning, on a common visual cue,” Mr. Kline said. “It makes you look at film in a completely different way.”

Alison Smith, author of the critical study “Agnès Varda” (1998), called Ms. Varda “a poet of objects and how we use them.” In an interview for this obituary, she added, “Varda as an artist intrigued, and intrigues, me by the constant freshness and curiosity which she brings to her inquiries into the everyday world and how we relate to it, particularly how she uses the detailed fabric of life.”

Richard Peña, who as director of the New York Film Festival helped introduce “Gleaners” to an American audience, praised that film and Ms. Varda’s “The Beaches of Agnès” (2008) as “touchstones for a new generation of nonfiction filmmakers.”

Ms. Varda is represented at the Museum of Modern Art by photographs, films, videos and a three-screen installation titled “The Triptych of Noirmoutier.” “A decision to change direction and move into installation art when over 80 is, by any standards, remarkable,” Ms. Smith said. “But her energy was awe-inspiring.”

John Anderson is a regular film critic for Variety, Newsday, The Washington Post, and Americamagazine. He appears frequently in The New York Times, and he has contributed to The Wall Street Journal, the Los Angeles Times, The Nation, Film Comment, and The Village Voice. He’s a past member of the selection committee of the New York Film Festival and the author of Sundancing (Avon), Edward Yang (University of Illinois), and, with Laura Kim, I Wake Up Screening (Billboard Books). With David Sterritt, he edited The B List, the most recent book by the National Society of Film Critics. He is also a member of the National Society of Film Critics.