"We can't sit around for 100 years while the rich and powerful get richer and more powerful and everyone else falls further and further behind." 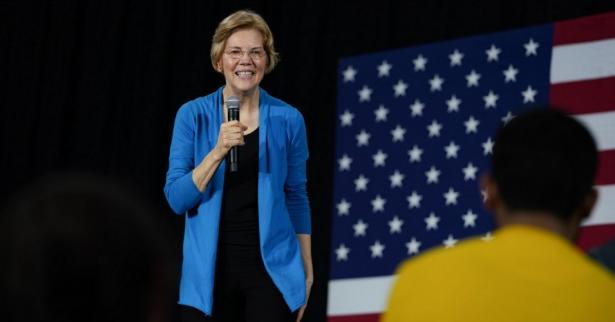 Sen. Elizabeth Warren (D-Mass.) on Friday announced that she supports ending the filibuster in the U.S. Senate, @ewarren/Twitter

Calling on the nation to "wake up to the reality of the United States Senate," Sen. Elizabeth Warren is set to announce Friday that she supports eliminating the filibuster.

The 2020 presidential candidate is expected to endorse the proposal in a speech at the National Action Network Convention in New York Friday morning.

"When Democrats next have power, we should be bold and clear: We're done with two sets of rules—one for the Republicans and one for the Democrats," Warren is expected to say. "And that means when Democrats have the White House again, if Mitch McConnell tries to do what he did to President Obama and puts small-minded partisanship ahead of solving the massive problems facing this country, then we should get rid of the filibuster."

"I'm not running for president just to talk about making real, structural change. I'm serious about getting it done," the speech reads. "And part of getting it done means waking up to the reality of the United States Senate."

For generations the filibuster has been used to block progress, and in recent years, obstruction in the Senate has only gotten worse. We’re fighting for big, structural change—but we won't get anything done unless we face this head on.

"If Mitch McConnell tries to do what he did to President Obama ... then we should get rid of the filibuster"https://t.co/I1optqHE9H

Getting rid of the filibuster—the Senate procedure which allows a minority party to delay a vote by drawing out debate and block legislation from passing by requiring a "supermajority" of 60 senators to approve it—would be a key step toward passing progressive measures, advocates say.

At the NAN Convention, Warren is expected to note that the filibuster has stopped the Senate from passing racial justice legislation for decades, including an anti-lynching bill which was first introduced a century ago but didn't pass until December 2018.

"It nearly became the law back then. It passed the House in 1922. But it got killed in the Senate—by a filibuster. And then it got killed again. And again. And again," Warren plans to say. "More than 200 times. An entire century of obstruction because a small group of racists stopped the entire nation from doing what was right."

Advocates including Warren also say the end of the filibuster would make it easier for the Senate to pass meaningful legislation to combat the climate crisis and to further other progressive causes.

"We can't sit around for 100 years while the rich and powerful get richer and more powerful and everyone else falls further and further behind," Warren's speech reads. "We can't sit around for 100 years while climate change destroys our planet, while corruption pervades every nook and cranny of Washington, and while too much of a child's fate in life still rests on the color of their skin. Enough with that."

Warren joins fellow 2020 Democratic hopefuls Pete Buttigieg and Washington Gov. Jay Inslee in endorsing the end of the filibuster. Her speech Friday will represent her latest push for "structural change" that she says would have far-reaching positive effects on the lives of working Americans. Since announcing her candidacy in January she has called for a tax on the wealth of the richest Americans to combat economic inequality and fund progressive programs, a universal childcare plan, and a breakup of powerful tech giants, among other proposals.

Never miss a beat. Get Common Dreams delivered to your inbox.