Where in The U.S. Are You Most Likely to Be Audited by the IRS?

Humphreys County, Mississippi -- an odd place for the IRS to hunt tax cheats. A rural county in the Mississippi Delta known for catfish farms, more than a third of its mostly African American residents are below the poverty line

April 7, 2019 Paul Kiel and Hannah Fresques ProPublica
Printer friendly
Where in The U.S. Are You Most Likely to Be Audited by the IRS? Published April 7, 2019 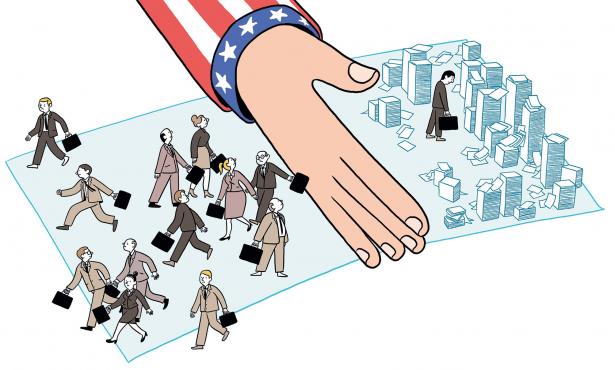 In a baffling twist of logic, the intense IRS focus on Humphreys County is actually because so many of its taxpayers are poor. More than half of the county’s taxpayers claim the earned income tax credit, a program designed to help boost low-income workers out of poverty. As we reported last year, the IRS audits EITC recipients at higher rates than all but the richest Americans, a response to pressure from congressional Republicans to root out incorrect payments of the credit.

The study estimates that Humphreys, with a median annual household income of just $26,000, is audited at a rate 51 percent higher than Loudoun County, Virginia, which boasts a median income of $130,000, the highest in the country.

Kim M. Bloomquist, the author of the study, which was first published in the industry journal Tax Notes, served as a senior economist with the IRS’ research division for two decades. He decided to map the distribution of audits to illustrate the dramatic regional effects of the IRS’ emphasis on EITC audits. Because more than a third of all audits are of EITC recipients, the number of audits in each county is largely a reflection of how many taxpayers there claimed the credit, he found.

In counties with the highest audit rates, there were about 11 audits per 1,000 tax returns filed each year, he found, which is more than 40 percent above the national average.

The map reveals wide variations in the audit rate from place to place, but also how certain groups of Americans are disproportionately affected by the IRS’ policies. The five counties with the highest audit rates are all predominantly African American, rural counties in the Deep South. The audit rate is also very high in South Texas’ largely Hispanic counties and in counties with Native American reservations, such as in South Dakota. Primarily poor, white counties, such as those in eastern Kentucky in Appalachia, also have elevated audit rates.

The states with the lowest audit rates tend to be home to middle income, largely white populations: places like New Hampshire, Wisconsin and Minnesota. Generally, the IRS audits taxpayers with household income between $50,000 and $100,000 the least.

In an email, an IRS spokesperson said that tax returns are selected for audit without regard to race or where the taxpayer lives.

EITC audits can be punishing for taxpayers, since they routinely start with a refund being held, and can drag on for well over a year. The IRS does sponsor a program to provide free legal help to low-income taxpayers, but in Mississippi, the state with the highest audit rate in the country (according to Bloomquist’s estimates, the IRS audits about 11,000 returns there each year), there is only one attorney for the program.

“I cover all 82 counties,” said Ben Wilkerson, of North Mississippi Rural Legal Services. Out of necessity, he largely deals with his clients over the phone, counseling them on how to collect documentation to confirm their earnings or that a child lived with them for over six months of the year. “We get a lot of calls from pretty much everywhere,” he said.

Rep. Terri Sewell, a Democrat whose western Alabama district includes some of the counties with the highest audit rates, and who sits on the House Ways and Means Committee, which oversees the IRS, said in response to the study that taxpayers shouldn’t be “disproportionately targeted for claiming a certain tax credit.”

Congress, she said, “must ensure that the IRS initiates and executes audits in a fair and impartial manner.”

Paul Kiel covers business for ProPublica. His current focus is on the state of the IRS and the fairness of American tax administration.

In recent years, his work has helped spur a $135 million settlement by a subprime lender for alleged abuses against service members, legislation in Congress, a federal investigation of a high-cost lender, state rule changes and the forgiveness of $17 million in medical bills by a nonprofit hospital.

Past areas of focus have included the foreclosure crisis, high-cost lending (particularly installment and payday loans), the widespread use of lawsuits and garnishments to collect consumer debts, and the consumer bankruptcy system.

His work has appeared in several newspapers, including The Washington Post and The New York Times. He has also produced stories for National Public Radio and American Public Media’s Marketplace, as well as appeared on This American Life.

Among other honors, his work has been awarded a Philip Meyer Award by Investigative Reporters and Editors, a Scripps Howard Award, a Best in Business Award from the Society of American Business Editors and Writers, the Online News Association’s Al Neuharth Innovation in Investigative Journalism Award, and a National Press Club Award. His e-book on the foreclosure crisis was featured in The Best Business Writing 2013.

Hannah Fresques is a data reporter at ProPublica. She previously worked as a data fellow at ProPublica and in education policy research with MDRC, a nonpartisan, nonprofit research organization specializing in random assignment program evaluation. She holds a master’s degree in quantitative methods for social sciences from Columbia University, where her coursework focused on applied statistics, research methodology and data science.

Send us tips. How are things at the IRS? Help us get the real story. ProPublica would like to hear from people who have worked at the Internal Revenue Service or are otherwise knowledgeable about tax enforcement.

ProPublica is a nonprofit newsroom based in New York. Sign up for ProPublica's Big Story newsletter to receive stories like this one in your inbox as soon as they are published.