How a Green New Deal Could Exploit Developing Countries

I am concerned that the Green New Deal could exacerbate what scholars like sociologist Doreen Martinez call climate colonialism – the domination of less powerful countries and peoples through initiatives meant to slow the pace of global warming. 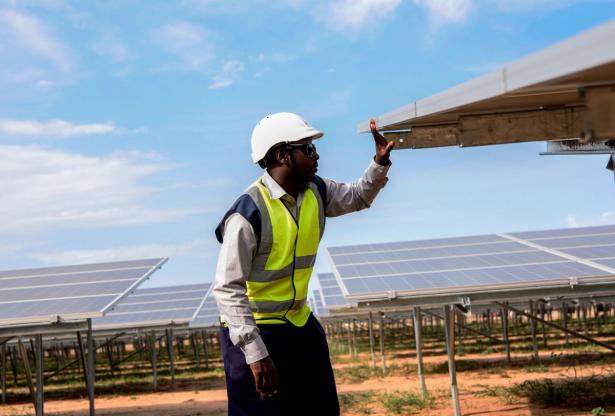 An engineer works at Soroti Power plant in the Soroti District of eastern Uganda, about 300 kilometres northeast of the capital Kampala, on December 12, 2016. Responding to global warming may require vast tracts of land - available land in poor countries.,Isaac Kasamani/AFP/Getty Images

The Green New Deal has changed the conversation among progressive Democrats about how to deal with climate change, from simply managing a disaster to how to take advantage of an existential threat to build a more just society.

However, should this legislative concept be transformed from the hypothetical framework it is today into actual policies, some of the solutions it engenders could make global inequality worse. As a scholar of colonialism, I am concerned that the Green New Deal could exacerbate what scholars like sociologist Doreen Martinez call climate colonialism – the domination of less powerful countries and peoples through initiatives meant to slow the pace of global warming.

The clearest cases of colonialism involve the unmistakable signifiers of foreign control: planted flags, and the formal and institutionally recognized assertion of authority over foreign lands. Only five countries in the world were not colonized by European empires in one way or other after the 15th century.

The history of colonialism has many clear milestones, including the 1494 Treaty of Tordesillas between Spain, Portugal and the Vatican that divided the world outside Europe between the two Iberian empires. At the Berlin Conference of 1884, European powers divvied the African continent among themselves.

U.S. colonialism has often been less stark. But the United States does occupy land that belonged to people who lived in North America before European settlers arrived. Following the realization of its “Manifest Destiny,” it also went beyond its coastal borders by taking over many islands, including those in Hawaii, the Philippines, Puerto Rico and Guam.

Likewise, overt foreign influence and control has become the exception rather than the rule, even for the original colonial powers. Throughout much of Africa and Asia, global empires like the British preferred a strategy of “indirect rule,” with chieftaincies, monarchies and other power structures that let them delegate their domination to local elites.

In 1946, there were only 35 member-states of the United Nations. Once most former colonies had become independent countries by 1970, that number had swelled to 127. Amid this wave of independence, rich countries continued to exert control over former colonies through a system Ghana’s first prime minister, Kwame Nkrumah, first called “neocolonialism.”

Rather than directly running other countries, neocolonial domination is accomplished through levers of political and economic leverage.

Green New Deal policies could empower communities on both sides of U.S. borders, and could expand the powers of poor nations to determine their own destinies. Or they could promote climate colonialism, a term that can mean different things to different people.

To me, it’s the deepening or expansion of foreign domination through climate initiatives that exploit poorer nations’ resources or otherwise compromises their sovereignty. Others focus more on how formerly colonized countries are paying the price for a crisis caused disproportionately by the emissions from more industrialized nations – their current and past colonizers.

But the Green New Deal will not meet any definition of climate justice if it becomes the next chapter in a long history of U.S. industrial policies that have oppressed people.

During the 19th century, when the transcontinental railway system arose, the U.S. gave land to rail companies it had taken it from Native Americans in a series of coerced treaties and wars. Similarly, responding to global warming may require vast tracts of land to grow food and carry out new policies as the climate changes. A global land rush is already underway around the globe.

Take, for example, carbon offsets: a form of investment in greenhouse gas emissions reduction that lets the buyer “offset” the effects of their emissions-producing activity.

But much of the available land is in poor countries, and inhabited by people who are those countries’ least politically powerful. This can put them in competition for the land that provides their basic needs with powerful private interests from the world’s most powerful countries.

For instance, a research institute reported in 2014 that Norwegian companies’ quest to buy and conserve forest land in East Africa to use as carbon offsets came at the cost of forced evictions and food scarcity for thousands of Ugandans, Mozambicans and Tanzanians. The Green New Deal could encourage exactly this kind of political trade-off.

Efforts to boost energy security can also drive climate colonialism. The African continent is, paradoxically, both home to the world’s largest solar power plant – the Noor Ouarzazate complex in Morocco – and people who are the least connected to grid.

Solar power may end up giving more Africans access to electricity but at the same time, many large renewable energy projects in North Africa could soon boost the European electric grid, bolstering European energy security with a climate-friendly source of power while millions of sub-Saharan Africans have none of their own.

Daniel A.M. Egbe, the coordinator of the African Network for Solar Energy, calls this linkage of large-scale solar farms with foreign power grids “a new form of resource exploitation.”

The Green New Deal’s stated goal of meeting all of America’s considerable and potentially increasing energy demand with renewable or zero-emission sources could create an incentive to go this route too, with Mexico. California already imports electricity from Baja California state and business interests stand ready to expand cross-border grid links throughout Central America if that proves feasible.

To be clear, I do not believe the Green New Deal will necessarily lead to climate colonialism and I see its emphasis on climate justice as a good start. Technologies and policies are tools, and how they function depends on how they are designed and how they are used.

The U.S. could, for instance, do more to subsidize renewable-energy technologies, because American innovation can expedite their adoption everywhere.

The U.S. could also follow the lead of the federal government’s National Academy of Sciences and fund a “substantial research initiative” on negative emissions, which the Intergovernmental Panel on Climate Change identifies as necessary to prevent the worst climate change scenarios.

The Green New Deal, in its current draft form, is just as compatible with this path as it is with climate colonialism. But I do believe that achieving a version of climate justice that doesn’t end at U.S. borders will require the right vision, values and strategies.