labor We Can Do Better Than Amazon

Governor Cuomo loves to enjoin us to think big about spending billions on infrastructure. He and Mayor de Blasio were prepared to commit $3 billion to Amazon. But no investment would repay New York more than a major investment in CUNY. 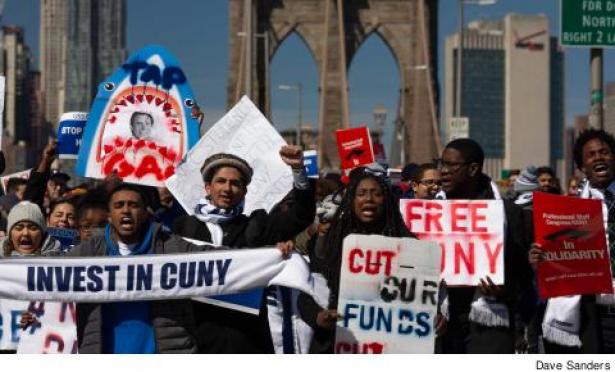 CUNY students demanded full funding during a march across the Brooklyn Bridge in March., Dave Sanders

More than a month after Amazon’s decision to withdraw its plan for a New York City headquarters, debate continues to rage over the willingness of State and City governments to pledge $3 billion in public money in exchange for Amazon’s promises of private economic development. But the debate also continues to be blind to a resource much closer to home. The most powerful engine of economic development for New York State is not Amazon, Google or any other corporation. It is an institution that already has deep roots in city neighborhoods and an unequaled record of advancing the poor and working class. Unlike Amazon, it is fully unionized. Better yet, it generates knowledge rather than profits. Its mission involves redistributing wealth rather than concentrating it at the top. And it will never leave New York City.

To PSC members, the identity of the resource is obvious. CUNY, with its half-million students, is responsible for enabling more people to rise out of poverty than any other university in the United States. CUNY leads the nation in fostering both individual and intergenerational economic mobility. According to economist Raj Chetty’s comprehensive 2017 study of the economic benefit of attending college (“Mobility Report Cards: The Role of Colleges in Intergenerational Mobility”), CUNY lifts nearly six times more people from the lowest income bracket to middle-class or higher incomes than all of the Ivy League colleges plus Duke, Stanford, M.I.T. and the University of Chicago – combined.

Nearly half of CUNY undergraduates come from families whose annual income is less than $20,000. More than 60 percent come from families with annual incomes under $30,000. Three-quarters are black, Latino or Asian. While some CUNY students are from middle-income families, the majority live in or close to poverty. For most, CUNY is the only realistic chance of building a good life within a political system that sets them up to fail.

All of us who work at CUNY, however, know that CUNY has always been about more than expanding the economy or even changing individual lives. It is about equipping students to think critically about the causes of inequality even as they tackle its effects in their own lives. At its best, CUNY has the potential to reimagine the economy, not just reduce its savageness. But CUNY’s impact on economic mobility for both individuals and their communities is undeniable. For students who are able to stay in college and graduate, a CUNY degree has economic reverberations that are still measurable two generations later.

We are right to resist reducing CUNY to a machine for increasing the tax base, but the statistics are revealing in a debate on economic development. The Social Security Administration reports that lifetime earnings for men with bachelor’s degrees are $900,000 higher than for those with high school degrees, and earnings for women are $630,000 higher. Last year alone CUNY graduated more than 50,000 students. Given that eight in 10 CUNY graduates are still living in New York State a decade after graduation, their income differential translates into millions of dollars of additional tax revenue every year for the city and state. It also means greater spending power in local communities, lower expenditures on social services, lower public health costs and lower expenditures on criminal justice and public assistance.

Collectively, CUNY graduates pump billions of dollars every year into the state and local economy, far more than was dreamed of by Amazon or any other corporation. Add to this the tax revenue and intellectual capital generated by CUNY’s 45,000 faculty and staff, and you begin to take the measure of the university’s economic contribution to New York.

Yet as we experience on a daily basis, CUNY is being systematically and deliberately starved of public funding. One result is that only a fraction of students graduate. Thus only a fraction receive the full benefit of the state and city’s initial investment in their education. Just 6 percent of CUNY community college students graduate in two years, and only 26 percent of four-year college students in four years.

Poverty is undoubtedly the largest reason CUNY students struggle to graduate, but the lack of investment by city and state governments is a close second. A good public college education costs money. New York has largely made the decision not to invest. And CUNY’s current Board of Trustees refuses to challenge that decision.

The city’s investment in CUNY has risen under Mayor de Blasio, but it still falls below the amount needed. Meanwhile Albany slashed per-student support for CUNY’s four-year colleges by nearly 20 percent between 2008 and 2018. To cover the gap, CUNY increased tuition by 46 percent over the same decade and increased its reliance on exploited adjunct labor. Full-time salaries are also far from competitive, but CUNY balances its budget on the backs of students and adjuncts.

The union’s sustained pressure on the State Legislature has yielded incremental improvements and saved CUNY from the worst of budget cuts. In 2016 PSC advocacy beat back a proposed half-billion-dollar cut proposed by Governor Cuomo. But the state and city must do much more.

Investment in CUNY is a wage justice issue and a racial justice issue. It is also a matter of economic development. The $3 billion in tax breaks for Amazon came from a combination of city laws designed to provide huge tax breaks for businesses that locate in certain areas and discretionary funding from the state, especially through Governor Cuomo’s Excelsior Jobs Program. Without changing a single law, the $1.2 billion promised to Amazon from the Excelsior Jobs Program could be redirected to CUNY. The idea is not far-fetched. While private corporations have mixed records of delivering on promised job creation, CUNY is a proven engine of economic development, a proven creator of jobs and an essential contributor to the state’s intellectual infrastructure.

No investment would repay New York more than a major investment in CUNY. The value of enabling CUNY to thrive goes well beyond dollars in the economy, but in purely economic terms it is also profound. The ASAP program at the community colleges has shown that an added investment per student in a structured and supportive program more than doubles the graduation rate. Adding $1.2 billion to CUNY’s budget would virtually guarantee that the graduation rate throughout the university would double. CUNY students would be able to take the classes they seek and get the advising they need. Part-time faculty would receive equal pay for equal work. Full-time faculty would have time to support every student in the class. College libraries would begin to restock their shelves. Labs would have equipment for every student in a class. Tuition would stop rising and even begin to fall to levels affordable for working-class students.

Barbara Bowen is president of the  Professional Staff Congress (PSC) the union that represents 30,000 faculty and staff at the City University of New York (CUNY) and the CUNY Research Foundation.