The estimated cost for the project below doubled and now stands at $27 billion, which Georgia Power customers are already paying for thanks to a state law — since overturned — that allowed utilities to collect payment before a project is completed. 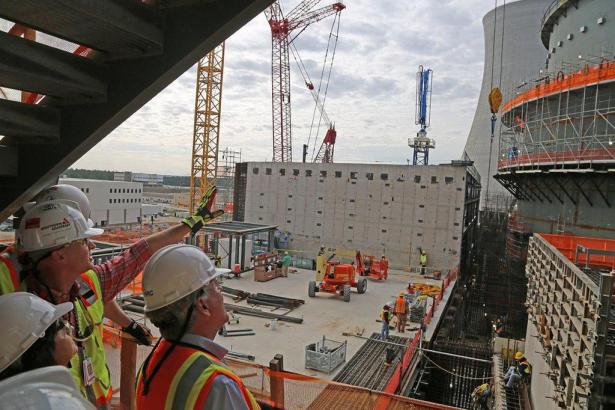 In the decade after the meltdown at Pennsylvania's Three Mile Island nuclear power plant, which took place 40 years ago this week, number of nuclear plant orders that U.S. utilities canceled nationwide amid skyrocketing costs: about 100

Amount ratepayers shouldered in cost overruns alone for the approximately 100 nuclear power plants built around that time: over $200 billion

Year in which Forbes magazine called the U.S. nuclear power program "the largest managerial disaster in business history, a disaster on a monumental scale": 1985

Year in which the nuclear power industry began using the term "nuclear renaissance" to hype a hoped-for revival of reactor construction: 2001

Between 2007 and 2009, number of applications for new reactor construction projects submitted to the U.S. Nuclear Regulatory Commission by utility companies: 18

Of those proposed projects, number that were in the South, where electricity markets are dominated by the monopoly utility model with guaranteed profits, and where some states allow utilities to force customers to pay in advance for construction projects: 13

Of the 18 proposed reactor projects, number that are still proceeding today, with others canceled amid skyrocketing costs driven in part by the 2011 Fukushima Daiichi nuclear power plant disaster in Japan: 1

Amount Duke Energy wants to charge its South Carolina customers for a decade of planning for two reactors that were never built at its Lee plant in Cherokee County: $240 million

Amount Florida Power & Light has already charged Florida ratepayers for two new proposed reactors at its Turkey Point plant in Miami-Dade County, construction of which is on hold and may never resume: over $300 million

Number of powerful 5 kilowatt home solar electric systems that could be installed with $2.3 billion: more than 65,000

Current cost estimate for the Vogtle project, now set to finish in 2022: over $27 billion

Year in which Democrats angered by the prepayment scheme's economic injustice and Republicans upset over its violation of free-market principles united in Georgia's legislature to quash similar deals for any other commercial reactors built in the state: 2018

Amount in additional taxpayer-backed federal loan guarantees that were announced for the Vogtle project last week amid a visit to the plant by U.S. Energy Secretary Rick Perry, who called it "the real new green deal": up to $3.7 billion