The author of this book, Wolfgang Kaleck, is founder and General Secretary of the European Center for Constitutional and Human Rights (ECCHR) in Berlin. He is also Edward Snowden's lawyer. 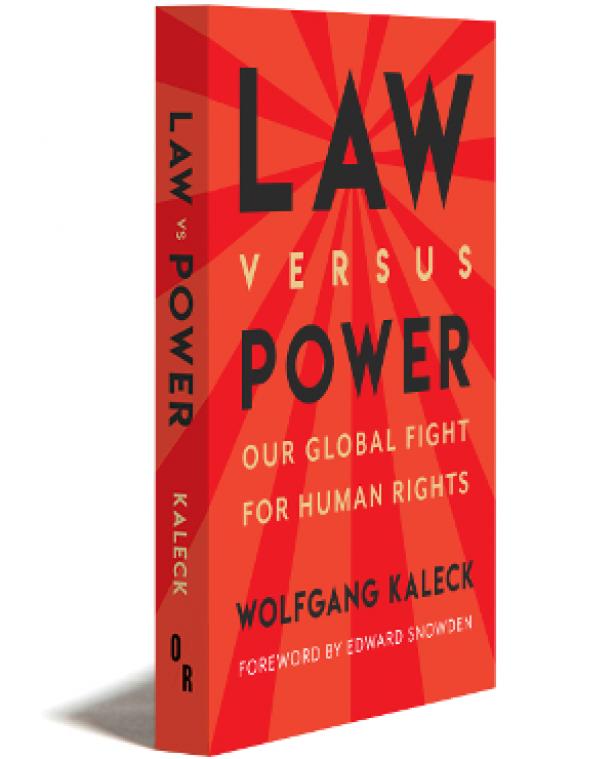 How can we hold dictators to account? The list of those who have enjoyed complete impunity is long. Lawyer Wolfgang Kaleck has spent his whole life fighting to reverse this state of affairs: using the law to challenge Latin American ex-dictators, representing the families of US drone-attack victims in Yemen, and filing criminal complaints against the likes of ex-US secretary of defence Donald Rumsfeld.

Kaleck’s latest book is a manifesto for international law and how it can be used to change the status quo. As Edward Snowden writes in the foreword: ‘when the history of our era is written not by the torturers and their apologists, but by those who never gave up on the promise of the Universal Declaration of Human Rights… Wolfgang Kaleck will be one of the primary authors.’

A compelling read, Law Versus Power offers much more than the dry rhetoric of a seasoned lawyer. Kaleck’s writing is personal, passionate and self-questioning. The narrative thread provides a chronological and reflective account of the cases that he and his partners have researched and submitted over several decades.

Ranging from the first conversations with the victims to the first tentative results (or disappointments) emerging years later, his writing skilfully draws us into the complexities of each case and what’s at stake.

We read about the passion and doubt that Kaleck and his team experienced in 2007 when setting up the non-profit organisation ‘The European Centre for Constitutional and Human Rights’ (ECCHR). The organization has charted new territory by initiating and taking legal proceedings against individuals, state actors and corporations, using the concept of universal jurisdiction. That is, bringing prosecutions in one state for events that ‘occurred in a different country and [where] neither victim nor perpetrator are nationals of that state.‘

One of the most inspiring outcomes of this type of prosecution was the Scotland Yard arrest of former Chilean dictator Augusto Pinochet in London in 1998, on behalf of the Spanish judge Baltasar Garzón. This event not only inspired lawyers like Kaleck, but also allowed them to imagine ‘how we as European lawyers could work with affected persons and social movements to take transnational legal actions against human rights violations.’

In 2019, victims of Franco in Spain are slowly finding justice in court thanks to an Argentinian judge; and international lawyers and activists are preparing heavily detailed evidence against Syrian dictator Bashar al-Assad.

But as Kaleck stresses, there are also plenty of setbacks.

To this day, Rumsfeld remains protected and there are still no criminal charges against him since prosecuting authorities in other states are scared to go after the US. This betrays a double standard which has existed since the Nuremberg trials, set up to judge the defeated Nazi criminals, but also (at least in theory) to apply criminal law universally. Since then, as Kaleck reminds us, the International Criminal Court has wilfully ignored the crimes of the French in Algeria, the British in Kenya and the United States in Vietnam. In other words, ‘the strong do what they can and the weak suffer what they must’ (ancient Greek historian Thucycides).

In that light, what can universal jurisdiction really achieve? For Kaleck, it is about changing opinions and precedents, as ‘many governments take note of the bad example set by the West and feel emboldened to continue their own torture practices by invoking the fight against terrorism.’

This double standard has also seeped into the structure and language of human rights organisations based in the Global North. In his book, Kaleck often questions his own practice and refers to Kenyan-American lawyer Makau W Mutua who underlines how the Western human rights world categorises people as ‘victims’, ‘perpetrators’ and ‘saviours’, leaving ‘no room for political analysis and even less room for addressing the responsibility borne by Western actors.’

This has pushed Kaleck and the ECCHR to challenge not only individuals guilty of torture, but also corporations that are guilty of not upholding European standards concerning workers’ rights and environmental standards when operating elsewhere. Kaleck also draws attention to the divide that still exists between his own relative security as a Western lawyer and his partners in India, Colombia or Thailand who receive daily death threats and who sometimes disappear.

Law Versus Power shows the scope that international law can actually have: from bringing a human rights violation to the fore (gathering meticulous evidence and raising awareness globally) to shrinking the world for perpetrators who can no longer travel to Europe for fear of being arrested.

Kaleck is well aware that one cannot change the world through legal action alone. But shaking up the status quo by challenging power relations and prosecuting those with total impunity is undeniably a first step towards justice.