labor 'The Fight for $15 Was Never Just About Raising Wages'

The Fight for $15 was never just about raising wages, it was also about building public anger at a system where corporations make billions while workers are paid poverty wages. It is a return to labor's roots, the refusal to accept exploitation. 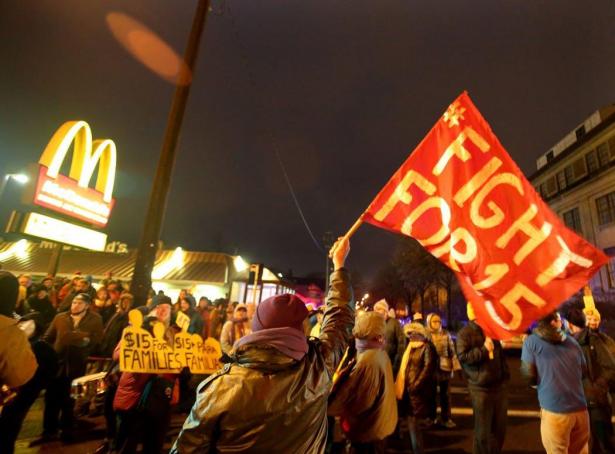 When the $15 minimum wage was signed into law in Saint Paul City Hall in November, I burst into tears. I spent three years working on the campaigns for $15 in Minneapolis and Saint Paul, including 18 months as the co-director of 15 Now Minnesota, where I coordinated the coalition of faith, labor, and community groups that fought for and won $15 in Saint Paul. I poured my heart and soul into the campaign. Most of the people who saw me that day in City Hall probably assumed I was crying tears of happiness and satisfaction, and in part I was. But I was also overwhelmed with exhaustion, frustration, and fear and that I hadn’t expected to feel so strongly. It was hard to celebrate our victory without thinking about the context of what lies ahead.

For millennials like me, the future looks bleak. New headlines break every day exposing the precarity of our global economy where a handful of billionaires hoard the majority of the world’s wealth. My generation is having fewer children, citing economic insecurity and fear about global political stability and climate change. I fought for $15 as a part of resisting that future and building something better.

From the beginning, the Fight for $15 was never just about raising wages, it was also about building public anger at a system where corporations make billions in profits while workers are paid poverty wages. In many ways, it is the modern incarnation of the root of the labor movement, the refusal to accept exploitation.

I’m proud to have been part of the movement that will raise wages for more than 100,000 workers, myself included. Even more than the raises, I’m proud of the ways we set an example of how ordinary people can win meaningful political change. But I am also coming to terms with the fact that I had to spend three years prying a minimal concession from some of the most progressive municipal governments in the country. It’s intimidating to have fought so hard for so little when we need to win so much.

There are serious battles ahead, far larger ones than a municipal minimum wage, that will determine what life is like for my generation. The tension of massive social change is alive in youth and popular culture: Teen Vogue is writing about general strikes, and Cardi B’s Instagram video calling for “action” in response to the government shutdown has more than 20 million views. Many millennials may not have been educated about the value of unions, but the labor movement has so many opportunities to harness the revolutionary energy of young people.

The local labor movement did just that in the Fight for $15. Many local unions participated in the movement by devoting staff time, donating money, and most importantly by tying the demand for $15 in with contract struggles. When Teamsters Local 320 made a $15 minimum wage a cornerstone of their negotiations for St Paul Public School Nutrition Service workers, it elevated the citywide fight while boosting the morale and energy of the union’s negotiation.

The $15 coalition was strong and successful because it brought together students, union workers, non-union workers, and retirees around the populist demand for $15. It was thrilling and inspiring to see labor help build the kind of movement that could win a minimum wage increase, and more.

On the other hand, there were also times that the unions in the coalition refused to fight with the urgency that working people, and often their own members, demanded. At various points in the campaign, union leaders accepted months of delay in the ordinance process, refused to hold labor-endorsed City Council members accountable, and pumped the brakes on protests that could have won a stronger, swifter policy. These were the disillusioning experiences that made me cry even though we won: it didn’t have to be this hard.

There were moments of the Fight for $15 where I was so frustrated with the local labor movement that I was ready to write off unions as useful allies in the struggle for my future altogether. There were also many moments where I saw our unions step up and be vibrant, powerful, badass communities to unite diverse people and win a better world.

Right now, the labor movement has huge opportunities around Medicare for All, the Green New Deal, and more. Working successfully with young people like me will be key not only to the success or failure of these campaigns, but the success or failure of the labor movement itself. We in the labor movement need to push our unions to meet these challenges with all the passion, discipline, and courage that defines the best moments of labor history. If unions can rise to the challenge, young people like me will take notice, and we will join.

Celeste Robinson is a waitress and member of UNITE HERE Local 17. As the co-director of 15 Now Minnesota, she helped win a  15 minimum wage in Minneapolis and Saint Paul, the first Fight for 15 victories in the Midwest. She graduated from Macalester College in 2016.