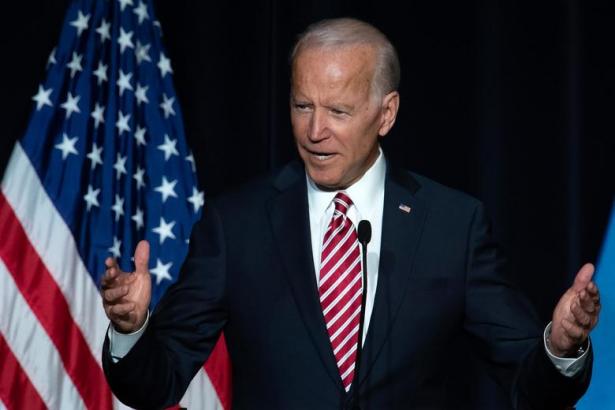 Joe Biden officially kicked off his long-expected 2020 campaign on Thursday with a video featuring footage from the 2017 white supremacist march and counterprotest in Charlottesville, Virginia. In his telling of the origin story of his latest White House bid, the moment President Donald Trump said that there were “some very fine people on both sides” of that clash was when Biden realized that “we are in the battle for the soul of this nation.”

“I believe history will look back on four years of this president and all he embraces as an aberrant moment in time,” Biden says. “But if we give Donald Trump eight years in the White House, he will forever and fundamentally alter the character of this nation—who we are—and I cannot stand by and watch that happen. The core values of this nation, our standing in the world, our very democracy, everything that has made America, America, is at stake.”

Biden’s pitch is many things—emotionally compelling, politically shrewd, and a little presumptuous, among them. But it is one thing above all else: convenient.

Biden is telling many Americans who oppose Trump, particularly white ones, what they want to hear: that Trump’s election—like what happened in Virginia the following summer—was an aberration, a tumor that can be surgically excised from the body politic, and not a symptom of an underlying disease that’s been present since the nation’s birth.

The desire to reduce American history to a series of individual moments is natural, particularly for a politician, but in this case the oversimplification gives Biden the chance to choose which moments “made America, America,” and which can be brushed aside as isolated incidents uncharacteristic of that same “America.” And so when images of the women’s suffrage and civil rights movements flash on screen, Biden is asking his audience to see that progress as what defines America, rather than the centuries of disenfranchisement based on gender and race that preceded it and the racism and sexism that remain. Consider how Biden chose to begin the video (emphasis mine):

Charlottesville, Virginia, is home to the author of one of the great documents in human history. We know it by heart: “We hold these truths to be self-evident, that all men are created equal, endowed by their Creator with certain unalienable Rights.” … We haven’t always lived up to these ideals; Jefferson himself didn’t. But we have never before walked away from them.

In the span of three words, Biden shrugs off Thomas Jefferson’s ownership of slaves—and the nation’s long embrace of slavery along with it—as a failure to live up to a professed set of ideals, as opposed to the conscious decision to compromise those ideals. Biden’s hardly the first politician to don rose-colored glasses when looking upon American history, but few Democrats wear them so regularly as he does today.

As I’ve noted before, Biden loves to wax nostalgic about the bipartisan days of yore, seemingly unable to grasp that the friends he made back during his early days in the U.S. Capitol were segregationists like Strom Thurmond and Jesse Helms, or that Congress was so male-dominated when he first arrived that it would take another two decades before women got their own restroom off the Senate floor. It’s why Biden praises the late John McCain, defendsVice President Mike Pence, and vouches for Republican congressmen who’ve spent their careers working to thwart progress. To Biden, public service is a noble act, regardless of what one does with one’s power. Trump makes plain the flaw in that logic, and so Biden must write him out of history as somehow un-American.

Biden is asking us to believe that Trump emerged from thin air—to ignore the reality that the Republican Party nominated him, after long exploiting a strategy of racial resentment—and to forget that 63 million Americans ultimately cast their ballots for him. It would be a stretch to say Biden wants to Make America Great Again in the nationalist sense Trump means it. But Biden, like Trump, is holding up the past as an example of where the nation needs to go. He is saying that America has always been great—still will be as long as Trump is denied another four years.

Folks, America’s an idea, an idea that’s stronger than any army, bigger than any ocean, more powerful than any dictator or tyrant. It gives hope to the most desperate people on earth. It guarantees that everyone is treated with dignity and gives hate no safe harbor. It instills in every person in this country the belief that no matter where you start in life, there’s nothing you can’t achieve if you work at it. That’s what we believe. And above all else, that’s what’s at stake in this election.

Such a Pollyannaish view of America is hardly unique to Biden, but it is uniquely helpful to his case when running in a crowded Democratic field. Biden’s biggest liability in the primary is his long record on the national stage, much of which looks downright conservative by today’s standards. And so Biden needs voters to believe that America before Trump is an America worth returning to—because the America before Trump is also the America that Joe Biden helped build. He spent 36 years in the U.S. Senate, including stints as the powerful chairman of the Foreign Relations and Judiciary committees, and then another eight years by President Barack Obama’s side. Biden, then, has been a key contributor to roughly one-fifth of the nation’s 243-year political history, a slice of time that has seen remarkable progress but also plenty of setbacks.

In the 1970s, Biden was a vocal opponent of school integration. In the 1980s, he was a law-and-order drug warrior. In the 1990s, he held the judiciary gavel during the Clarence Thomas confirmation hearings and helped pass the draconian Clinton crime bill. In the 2000s, he voted to authorize the invasion of Iraq and to pass bank-friendly bankruptcy reform. Most Americans look back fondly, for good reason, at the Obama administration in which Biden served faithfully, but it wasn’t without its flaws: Obama exponentially expanded the use of drones, failed to close Guantánamo Bay, and opted not to prosecute big banks and other bad actors in the wake of the 2008 financial crisis, among other shortcomings.

All of that makes the story of Joe Biden—and the pre-Trump history of modern America—far more complicated than Biden is ready to admit. Biden closed his launch video by urging Americans to “remember who we are,” but in reality he’s asking us to forget much more. He’s offering voters a deal in 2020: Forgive his political sins, and they can ignore the nation’s as well.

Help Slate continue covering the news and issues important to you—and get ad-free podcasts and bonus segments, members-only content, and other great benefits.