film ‘Knock Down the House’ Review: Running to Win Hearts and Minds and Votes

The big draw of the exuberant documentary “Knock Down the House” — about four women who ran for Congress in 2018 — is Representative Alexandria Ocasio-Cortez, Democrat of New York. 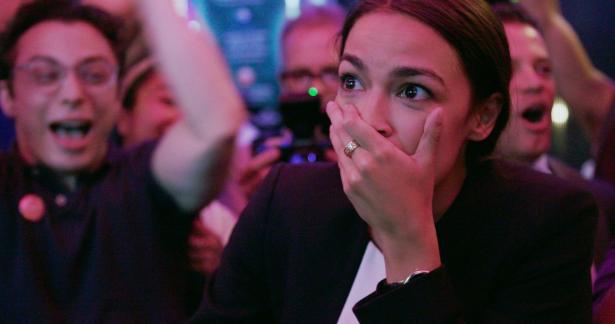 Alexandria Ocasio-Cortez in a scene from the documentary “Knock Down the House.”, Netflix

The big draw of the exuberant documentary “Knock Down the House” — about four women who ran for Congress in 2018 — is Representative Alexandria Ocasio-Cortez, Democrat of New York. The former bartender turned first-time congresswoman is the most high-profile member of the freshman class of 2019 and scarcely needs an introduction. Her social media presence alone shows why she has crossed over into pop celebrity, whether she’s tweet-storming or live-streaming on Instagram while eating popcorn, talking about staying grounded and assembling Ikea furniture: “Boom! I did it.”

The director Rachel Lears has said in interviews that after the 2016 presidential election she reached out to the progressive groups Brand New Congress and Justice Democrats, which ran unknowns (or what one organizer in the documentary describes as “non-career politicians”) in the 2018 midterms. From this pool, Lears chose four female Democratic candidates — Ocasio-Cortez, Cori Bush, Paula Jean Swearengin and Amy Vilela — each with an appealing back story, a seemingly unbeatable opponent and a progressive platform. (Lears and her husband, Robin Blotnick, wrote and produced “Knock Down the House”; she served as its cinematographer while he took on the role of editor.)

The women’s stories emerge piecemeal in “Knock Down the House,” which follows them on the campaign trail up to election night and, in one case, beyond. Some are more sharply delineated — what makes them run and why — than others. Vilela, who ran in the Democratic primary in Nevada, seems the most personally invested, having been driven into politics by an agonizing family tragedy that she speaks about with raw, heart-heavy candor. Both Bush (from Missouri) and Swearengin (West Virginia) largely appear fed up with the establishment Democrats representing their districts. “We’re coming out of the belly of the beast kicking and screaming,” Swearengin says.

Ocasio-Cortez quickly, and unsurprisingly, emerges as the focus. She’s a ready-made camera presence: sharp, young, emphatic and a tremendous, blazingly confident public speaker. Nothing seems to throw her off her game, whether she’s smiling at passers-by oblivious to her campaign leafleting or vigorously cleaning the clock of her very surprised-looking opponent, Joe Crowley, who had been in office since 1999. By the 2018 midterms, Crowley — who had originally been put on the ballot by his predecessor, Thomas J. Manton — was the fourth ranking House Democrat.

He never saw Ocasio-Cortez coming; few did, other than these filmmakers. Because of Lears’s early access to the candidates, she and her camera seem to have been in the war rooms right from the start. Quickly and efficiently, and with the aid of some concise onscreen text and talking-head interviews, she sketches in how Brand New Congress and Justice Democrats operated. A lot of this is fascinating but could be clearer; it’s hazy how the groups coordinated their efforts in 2018, how they actually run candidates and what running someone fully entails. There are atmospheric back-room scenes with the candidates and their teams, but who hired whom?

The timeline jumps around a bit, not always helpfully. Ocasio-Cortez is already running when the movie opens on her delivering an amusing gender analysis while putting on makeup. Soon, the movie cuts to Kentucky nine months earlier where a group of young people with laptops (one ornamented with a “Bernie for U.S. President” bumper sticker) are discussing an unnamed potential candidate. There’s talk and a call for a vote: “All those in favor of moving her to the next round, raise your hand.” Cut to Corbin Trent, of the Justice Democrats, who says that the “biggest shared goal” of his group and Brand New Congress is “removing the corrupting influence of money in politics.”

These two organizations, Trent continues, are offering an alternative path to Congress, one free of lobbyists and special-interest groups. “Right now our Congress is 81 percent men,” Trent says. “It’s mostly white men, it’s mostly millionaires, it’s mostly lawyers.” This peek at outsider organizations is fascinating and could easily be spun into a separate documentary, as could the story of Jo-Ann Floyd-Whitehead, a community organizer who in 2008, with her husband, helped Barack Obama win the Democratic primary. “The Whiteheads are legendary,” says Ocasio-Cortez as people pore over her petition to get on the 2018 primary ballot. “This is the war room for every insurgent campaign in Queens.”

This particular insurgency, of course, was part of a larger national shift that “Knock Down the House” (and the Bernie Sanders stickers and T-shirts) makes clear was only partly in reaction to the Trump presidency. Lears doesn’t dig into that shift as deeply as she could (this is the rare time that you yearn for a movie to be longer), but it’s there as the candidates push forward and their races and the documentary both develop great urgency. These women are running for office — while driving, walking, talking and walking some more — to win hearts and minds and votes. Often, it feels as if they’re running for their lives. They are also, as Ocasio-Cortez says forcefully, “running to win.

"Knock Down the  House" is currently streaming on Netflix and screening in theaters around the country.