Breaking the Grip of Militarism: The Story of Vieques

Vieques is a small Puerto Rican island with some 9,000 inhabitants. For six decades, Vieques served as a bombing range, military training site, and storage depot for the US Navy, until its residents rescued their homeland from the grip of militarism

May 9, 2019 Lawrence Wittner History News Network
Printer friendly
Breaking the Grip of Militarism: The Story of Vieques Published May 9, 2019 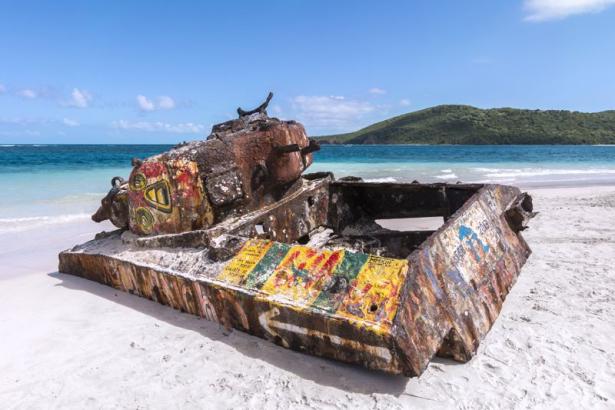 Rusted old tank on the Puerto Rican island of Vieques. In 1939 the U.S. Navy began to use Vieques as a gunnery and bombing practice site., credit: World Beyond War

Fringed by palm trees and lovely beaches, with the world’s brightest bioluminescent bay and wild horses roaming everywhere, it attracts substantial numbers of tourists.  But, for about six decades, Vieques served as a bombing range, military training site, and storage depot for the U.S. Navy, until its outraged residents, driven to distraction, rescued their homeland from the grip of militarism.

Like the main island of Puerto Rico, Vieques—located eight miles to the east―was ruled for centuries as a colony by Spain, until the Spanish-American War of 1898 turned Puerto Rico into an informal colony (a “nonsovereign territory”) of the United States.  In 1917, Puerto Ricans (including the Viequenses) became U.S. citizens, although they lacked the right to vote for their governor until 1947 and today continue to lack the right to representation in the U.S. Congress or to vote for the U.S. president.

During World War II, the U.S. government, anxious about the security of the Caribbean region and the Panama Canal, expropriated large portions of land in eastern Puerto Rico and on Vieques to build a mammoth Roosevelt Roads Naval Station.  This included about two-thirds of the land on Vieques.  As a result, thousands of Viequenses were evicted from their homes and deposited in razed sugar cane fields that the navy declared “resettlement tracts.”

The U.S. Navy takeover of Vieques accelerated in 1947, when it designated Roosevelt Roads as a naval training installation and storage depot and began utilizing the island for firing practice and amphibious landings by tens of thousands of sailors and marines.  Expanding its expropriation to three-quarters of Vieques, the navy used the western section for its ammunition storage and the eastern section for its bombing and war games, while sandwiching the native population into the small strip of land separating them.

Over the ensuing decades, the navy bombed Vieques from the air, land, and sea.  During the 1980s and 1990s, it unleashed an average of 1,464 tons of bombs every year on the island and conducted military training exercises averaging 180 days per year. In 1998 alone, the navy dropped 23,000 bombs on Vieques.  It also used the island for tests of biological weapons.

Naturally, for the Viequenses, this military domination created a nightmarish existence.  Driven from their homes and with their traditional economy in tatters, they experienced the horrors of nearby bombardment.  “When the wind came from the east, it brought smoke and piles of dust from their bombing ranges,” one resident recalled.  “They’d bomb every day, from 5 am until 6 pm.  It felt like a war zone.  You’d hear . . . eight or nine bombs, and your house would shudder. Everything on your walls, your picture frames, your decorations, mirrors, would fall on the floor and break,” and “your cement house would start cracking.”  In addition, with the release of toxic chemicals into the soil, water, and air, the population began to suffer from dramatically higher rates of cancer and other illnesses.

Eventually, the U.S. Navy determined the fate of the entire island, including the nautical routes, flight paths, aquifers, and zoning laws in the remaining civilian territory, where the residents lived under constant threat of eviction. In 1961, the navy actually drafted a secret plan to remove the entire civilian population from Vieques, with even the dead slated to be dug up from their graves.  But Puerto Rican Governor Luis Munoz Marin intervened, and U.S. President John F. Kennedy blocked the Navy from implementing the plan.

Long-simmering tensions between the Viequenses and the navy boiled over from 1978 to 1983. In the midst of heightened U.S. naval bombing and stepped up military maneuvers, a vigorous local resistance movement emerged, led by the island’s fishermen.  Activists engaged in picketing, demonstrations, and civil disobedience―most dramatically, by placing themselves directly in the line of missile fire, thereby disrupting military exercises.  As the treatment of the islanders became an international scandal, the U.S. Congress held hearings on the matter in 1980 and recommended that the navy leave Vieques.

But this first wave of popular protest, involving thousands of Viequenses and their supporters throughout Puerto Rico and the United States, failed to dislodge the navy from the island.  In the midst of the Cold War, the U.S. military clung tenaciously to its operations on Vieques.  Also, the prominence in the resistance campaign of Puerto Rican nationalists, with accompanying sectarianism, limited the movement’s appeal.

In the 1990s, however, a more broadly-based resistance movement took shape.  Begun in 1993 by the Committee for the Rescue and Development of Vieques, it accelerated in opposition to navy plans for the installation of an intrusive radar system and took off after April 19, 1999, when a U.S. navy pilot accidentally dropped two 500-pound bombs on an allegedly safe area, killing a Viequenses civilian.  “That shook the consciousness of the people of Vieques and Puerto Ricans at large like no other event,” recalled Robert Rabin, a key leader of the uprising. “Almost immediately we had unity across ideological, political, religious, and geographic boundaries.”

Rallying behind the demand of Peace for Vieques, this massive social upheaval drew heavily upon the Catholic and Protestant churches, as well as upon the labor movement, celebrities, women, university students, the elderly, and veteran activists.  Hundreds of thousands of Puerto Ricans throughout Puerto Rico and the diaspora participated, with some 1,500 arrested for occupying the bombing range or for other acts of nonviolent civil disobedience.  When religious leaders called for a March for Peace in Vieques, some 150,000 protesters flooded the streets of San Juan in what was reportedly the largest demonstration in Puerto Rico’s history.

Facing this firestorm of protest, the U.S. government finally capitulated.  In 2003, the U.S. Navy not only halted the bombing, but shut down its Roosevelt Roads naval base and withdrew entirely from Vieques.

Despite this enormous victory for a people’s movement, Vieques continues to face severe challenges today.  These include unexploded ordnance and massive pollution from heavy metals and toxic chemicals that were released through the dropping of an estimated trillion tons of munitions, including depleted uranium, on the tiny island.  As a result, Vieques is now a major Superfund Site, with cancer and other disease rates substantially higher than in the rest of Puerto Rico. Also, with its traditional economy destroyed, the island suffers from widespread poverty.

Nevertheless, the islanders, no longer hindered by military overlords, are grappling with these issues through imaginative reconstruction and development projects, including ecotourism.  Rabin, who served three jail terms (including one lasting six months) for his protest activities, now directs the Count Mirasol Fort―a facility that once served as a prison for unruly slaves and striking sugar cane workers, but now provides rooms for the Vieques Museum, community meetings and celebrations, historical archives, and Radio Vieques.

Of course, the successful struggle by the Viequenses to liberate their island from the burdens of militarism also provides a source of hope for people around the world.  This includes the people in the rest of the United States, who continue to pay a heavy economic and human price for their government’s extensive war preparations and endless wars.

[Lawrence Wittner (https://www.lawrenceswittner.com/ ) is Professor of History Emeritus at SUNY/Albany and the author of Confronting the Bomb (Stanford University Press).]