'We Are in a Constitutional Crisis': Groups Deliver 10 Million Petitions to Congress Demanding Trump Impeachment

On behalf of a growing movement of 10 million, we ask Democratic leadership to be bold in standing up for democracy. We agree with Speaker Pelosi: We are in a constitutional crisis. And there is a remedy: Start impeachment hearings now. 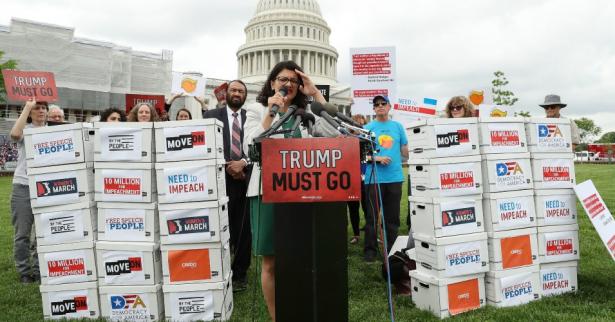 "We agree with Speaker Pelosi: We are in a constitutional crisis. And there is a remedy: Start impeachment hearings now."
—Jane Slusser, Need to Impeach

The petition delivery—which one organizer described as "likely the biggest" in U.S. history—came just hours after House Speaker Nancy Pelosi (D-Calif.) said the country is in the midst of a "constitutional crisis" due to the Trump administration's refusal to comply with congressional oversight.

During a rally on Capitol Hill Thursday, Jane Slusser—organizing director for Need to Impeach—urged Pelosi to take action in line with the gravity of her words.

"On behalf of a growing movement of 10 million, we ask Democratic leadership to be bold in standing up for democracy," Slusser said. "We agree with Speaker Pelosi: We are in a constitutional crisis. And there is a remedy: Start impeachment hearings now." 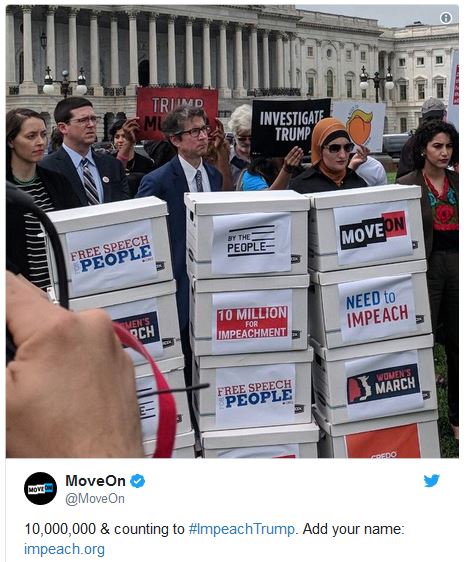 Rep. Rashida Tlaib (D-Mich.) told the crowd at Thursday's rally that the U.S. Congress cannot continue to stand by and "allow the rule of law to be eroded."

"Movements happen with actions like this where millions of us speak up, demanding that our representatives work on our behalf," said Tlaib, who submitted a resolution to begin impeachment hearings before the redacted Mueller report was made public last month. 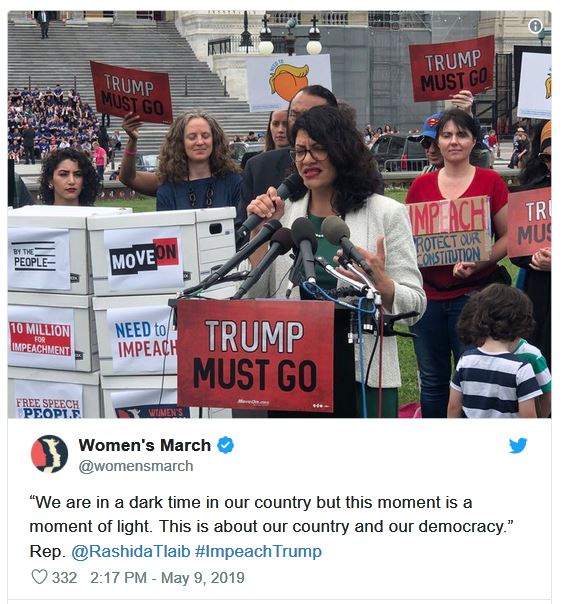 Mueller's findings provided a detailed look into the Trump administration's corrupt and possibly criminal behavior around the Russia investigation, including numerous instances of potential obstruction of justice.

Since the release of the special counsel's 400-page report, a growing number of Democrats in Congress have expressed support for launching impeachment proceedings against Trump, including Sen. Elizabeth Warren (D-Mass.) and Rep. Alexandria Ocasio-Cortez (D-N.Y.).

With their delivery of 10 million petitions on Thursday, activists hoped to get the attention of Democrats who have yet to join their fellow lawmakers and constituents in backing impeachment hearings.

"I ask: How much more do we need to see to take action?" said Joseline Garcia, a volunteer with advocacy group By the People. "What kind of message are we going to be sending to future administrations and generations of people if we do not hold Donald Trump accountable for the numerous violations he has committed?"