Sanders and Ocasio-Cortez Pick a Fight With the Loan Sharks 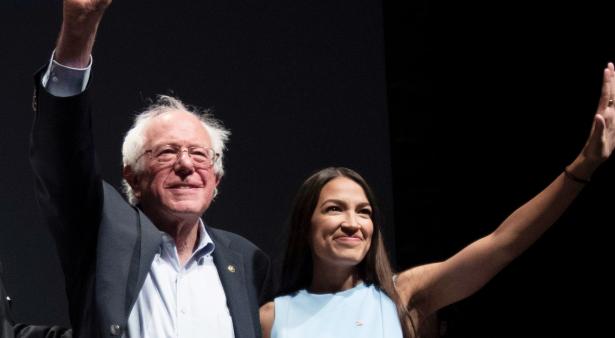 The legislation, called the Loan Shark Prevention Act, is a shot fired in the war between self-identified democratic-socialist lawmakers and the economic elite. With their national profile rising and their base growing, the former are seeking to make it clear to working-class people that they will fight tooth and nail to protect them from Wall Street predation.

Sanders and Ocasio-Cortez’s rollout video evolved into a sprawling conversation, touching on everything from healthcare to criminal justice. Their discussion dwelled on the resonance of a choice James Baldwin quote: “Anyone who has ever struggled with poverty knows how extremely expensive it is to be poor.”

Ocasio-Cortez reported that she’d heard from a constituent who took out a bank loan in 2006 to pay for his mother’s cancer treatments. The bank charged him a 20 percent interest rate, which left him paying $800 a month to the bank itself, on top of the financial difficulty of caring for his mother. When he lost his job in the recession and became unable to make these payments, the bank sued him in court and and garnished his wages.

“You’ve got all these guys in their three-piece suits who are now the new loan shark hoodlums that we used to see in the movies,” said Sanders. “You know in the movies, they say, ‘I’ll break your kneecaps if you don’t pay back.’ Well, I don’t know that they break kneecaps —”

“Or maybe do something even worse,” Sanders replied. “Maybe pull the plug on your mom who needs medical treatment. So let’s be clear about what we’re talking about. We’re talking about economic brutality.”

Sanders stressed that many states once had laws that capped interest rates in their jurisdiction. In 1978, the Supreme Court’s Marquettedecision allowed banks to set up charters in states without such laws, and to charge high interest rates across state lines. As a result, where it was once typical for interest rates to be capped below 15 percent in many places, banks are now able to charge exorbitant rates — up to 30 percent in some cases — across the country with impunity.

The Loan Shark Prevention Act would put an end to this practice, subjecting all banks to the same 15 percent interest rate cap, no matter where they hold charters. The legislation is modeled after a bill Sanders first proposed in 2009. (He used the same language ten years ago about “loan sharks in three-piece suits.”)

The bill extends beyond banks to all consumer loans, including those issued by retail stores. It’s becoming common for department stores like Sears, Macy’s, Lowe’s, and Kohl’s to issue credit cards themselves. Consumers are often unaware of the terms attached to the credit cards, including very high-interest loans.

By capping interest rates on all consumer loans, the Loan Shark Prevention Act would essentially wipe out the payday lending industry.

It’s common for traditional banks to have terms that require consumers to keep a minimum amount in their bank account at all times, or else pay a fee. A typical minimum amount is $1,500 — but millions of Americans living paycheck to paycheck don’t have $1,500 to their name every day of the month.

The result is that one in four US households, or about 68 million people, are unbanked or underbanked, meaning they’re fully or partially boxed out of traditional financial services. The problem is exacerbated by the retreat of banks from low-income communities, both rural and urban, especially after the financial crisis. Millions of people, including Ocasio-Cortez’s constituents in urban New York City and Sanders’s constituents in rural Vermont, live in what are known as banking deserts.

If people have no access to a traditional bank and need money in a pinch — say their car breaks down, they have a medical emergency, or they need to make rent to avoid eviction — the only available option is often payday lenders. These companies exist to prey upon people in desperate financial straits, sometimes charging them ratesof several hundred percent. The Loan Shark Prevention Act would subject payday lenders to the same interest rate cap as everyone else, driving them out of business.

But what to do with all the people who remain unbanked and can’t afford to keep a traditional bank account? If the payday lenders are wiped off the map, a major financial predator disappears, but so too does a source of emergency money, or even a convenient place to cash a check. Though it’s not part of this legislation, Sanders and Ocasio-Cortez have addressed that problem by calling for the United States to revive a postal banking system. (Sanders introduced legislation to study postal banking in 2013.)

By law, the United States Postal Service is required to have a brick-and-mortar post office in every zip code in America. From 1911 to 1966, the USPS functioned as a public bank, offering basic financial services at post offices. Sanders and Ocasio-Cortez want to bring that practice back. They propose that USPS begin providing the public with basic checking and savings accounts, low-interest loans, ATMs, debit cards, check cashing, money-wiring services, and online banking services.

The payday lenders would be gone, but the postal service would fill the void left behind — without predatory or extortionary practices. That way everyone would be able to have a bank account and access to credit, and there would be no more payday loan sharks preying ondesperate people for profit.

As Ocasio-Cortez seemed to hint in the announcement of the bill, a postal banking system could be a pilot program for an independent public bank — a public option, if you will. Researchers Thomas Herndon and Mark Paul have outlined what this could look like in practice. A public bank would compete with privately owned banks, forcing them to bring their interest rates down to keep customers, a process that over time could dramatically relieve the consumer debt burden.

In the US, wages have stagnated, living costs are skyrocketing, and the median credit card interest rate is 21 percent, drowning people in consumer debt. Feeling the squeeze, nearly 90 percent of Americans support a cap on interest rates. But the powerful banking lobby will push back, and the bill will face difficulty in a legislature with strong ties to the finance sector on both sides of the aisle.

In their rollout video, Ocasio-Cortez and Sanders urged constituents to put pressure on lawmakers to prioritize the needs of working people over the interests of their friends on Wall Street.

“Today we’re telling Wall Street and the payday lenders that enough is enough,” he said. “Your grotesque and disgusting behavior is not acceptable in America.” But the task can’t be left to a few politicians who are brave enough to challenge the corporate consensus. People need to organize to make it clear to lawmakers: if you choose lobbyists and donors over us, it will cost you your career.