The airline is telling employees that unions take money they could spend on entertainment instead. Will anyone really fall for that anti-union tactic? 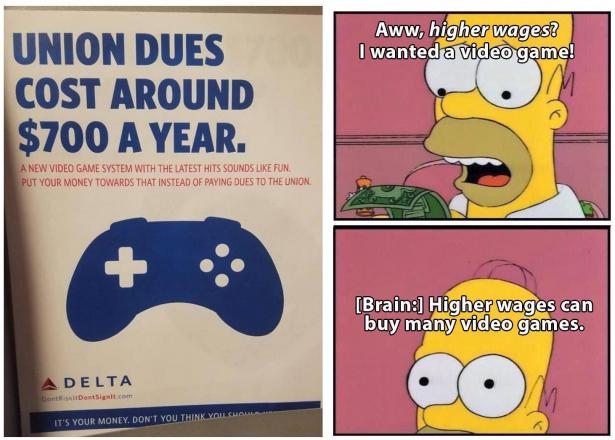 As part of an anti-union campaign, Delta Airlines has circulated silly and condescending flyers suggesting workers would be better off spending their money on video games and beer than devoting it to union dues.,

In its latest offensive to beat back unionization, Delta Air Lines displays total contempt for labor unions and an astonishing ignorance about what unions have accomplished to lift American workers.

Delta has a new anti-union poster that tells employees, “A new video game system with the latest hits sounds like fun. Put your money towards that instead of paying dues to the union.” Another Delta poster estimates that union dues cost $700 a year and says, “Nothing’s more enjoyable than a night out watching football with your buddies. All those union dues you pay every year could buy a few rounds.”

Economic studies have found that union members earn 13.6% more than comparable non-union workers, after adjusting for education, age and other factors. That means a Delta flight attendant who earns $60,000 a year might see her compensation rise by over $7,000 a year (far more than $700) if her pay rose 13.6% as a result of Delta’s flight attendants unionizing. Only Delta’s pilots and dispatchers are unionized although many of its flight attendants, baggage handlers and ramp workers are eager to unionize. Delta boasts that it provides the best pay and profit-sharing in the airline industry, although its employees often complain they have to pay more for health coverage than workers at other airlines.

Delta ignores – or is ignorant of – all that unions have done for American workers. After the second world war, the United Auto Workers, the United Steelworkers and other unions played a pivotal role in building the world’s largest middle class. Unions also brought the 40-hour week, pensions, employer-backed healthcare, far safer workplaces and curbs on arbitrary firings. There’s much truth to the bumper sticker, “Unions: The Folks Who Brought You the Weekend”.

In mounting an all-out offensive against unionization, Delta is acting like many American corporations. As I write in my upcoming book, Beaten Down, Worked Up: The Past, Present, and Future of American Labor, “In no other industrial nation do employers fight so hard to defeat, indeed quash, labor unions.” In other countries, employers generally see unions as legitimate institutions that represent workers’ interests and that businesses need to work with. But in the US, the common (though not universal) corporate view is that unions are the enemy, an illegitimate nuisance that should be wiped out.

Examples abound of companies going to great lengths to keep out unions. One study found that employers fire nearly one-fifth of the rank-and-file workers who lead organizing drives. During a unionization campaign at a Fruit of the Loom factory in Texas, the company hung a banner across the plant saying, “Wear the Union Label. Unemployed.” When an ITT Automotive plant in Michigan faced a union drive, it parked 13 flatbed tractor trailers with shrink-wrapped production equipment in front of its plant and next to those trucks it posted large hot-pink signs reading, “Mexico Transfer Job”.

Menards, a Wisconsin-based home-improvement chain, was so intent on beating back unions that its employment contracts once said that any store managers whose workers unionized would have their salaries chopped by 60%. Imagine what lengths Menards’ store managers must have gone to in order to crush unionization drives.

At times, Delta’s anti-union campaign has been disingenuous. It warns its workers that if they vote to unionize, it could take years – it cites one case that took seven years – for their union to negotiate a first contract (during which the company might not provide any raises). Delta also cautions that if the workers unionize, their pay and vacation time “could be negatively affected”. There’s just one reason why contract talks could drag on for years and pay “could be negatively affected” and that’s because some companies play vindictive hardball to make life tough for the union and convince workers they made a mistake in unionizing.

Sara Nelson, the president of the Association of Flight Attendants, said Delta spent $38m to defeat a 2010 drive in which flight attendants voted narrowly against unionizing, 9,216 for and 9,544 against. “Unions are the only reason we have any protections at work or any ability to claim good jobs. And management doesn’t like that,” Nelson says. “Union-busting is a multibillion-dollar business because it keeps labor costs low and allocates all of the control to a few in power.”

Regarding Delta’s new, anti-union posters, Nelson said, “The contempt for workers is so ingrained in these people they just can’t help themselves sometimes. This was one of those times.”

Soon after word spread about these posters, some Democratic lawmakers were quick to denounce them. Katie Porter, a House member from California, tweeted that Delta “was making an extra $800M per YEAR because of the Trump tax bill. But you’re aggressively undermining unions, which fight for fair pay and job security for your employees? @Delta teaching a masterclass in corporate greed.” Senator Sherrod Brown of Ohio tweeted: “Shame on@Delta for this condescending bullshit. A gaming system can’t give you: fair wages, health care benefits, job security, retirement benefits.”

As part of its anti-union crusade, Delta is essentially telling its employees that unionizing could make things worse for them and bring lower pay and worse vacations. If unions are as bad for workers as Delta contends, then why is Delta fighting hammer and tongs against unionization? The answer is clear: Delta fears that a union will give workers a strong voice on the job and pressure the company – which had $3.9bn in net income last year – to share more of its bounty with the workers who have made Delta such a success.