It was 7 AM April 30th in Caracas when I awoke to hear gun shots outside my hotel. Our group, seven US citizens and one Canadian, had been in here since April 27 attending a housing conference and looked forward to the next day’s May Day celebration. 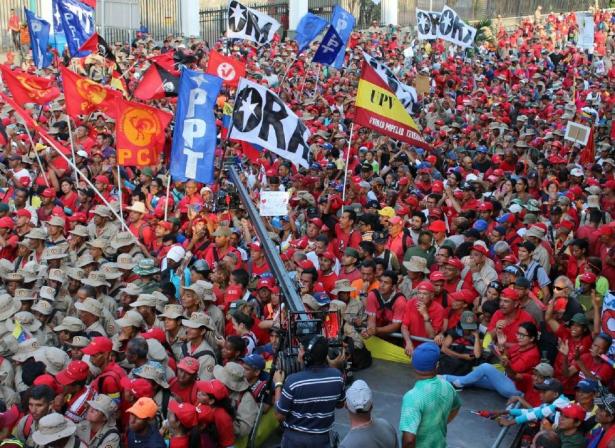 Some of the 400,000 who marched from all over Caracas to Miraflores on May Day celebrating the defeat of the Guaidó- US coup attempt the previous day., Photo by Pat Fry

I feared the worst. For several weeks, self-proclaimed “president” Juan Guaidó had been giving an ultimatum – the elected Venezuelan President Nicholás Maduro must step down by May Day when he promised the “mother of all marches” by the opposition. The threat of US military intervention hung in the air.

I hurried to get dressed and out the door of my hotel room. The housekeeper at the elevator said with distain – “golpistas” (coup plotters) when I asked her about the gunfire.

At 10:00 am, when our group left for the Hotel Alba in downtown Caracas for the second day of a housing conference, the streets appeared normal. People were walking to work or to school. It was different than the reports in US media that a coup had taken place and a war was underway. Our group quickly wrote a statement denouncing the Trump administration’s efforts to overthrow the government. We were interviewed in the hotel lobby by Canal 8, Venezuelan government television, and it was featured in the news several times throughout the day.

It was not until I spoke to a reporter from the foreign press at noontime that I learned fully the details of the events he witnessed first-hand that morning. Some 17 soldiers had been deceived into coming to the La Carlota military base which was near an upscale neighborhood of Caracas. A higher-ranking officer had told the young soldiers that they were going to an event to be honored as new recruits.

Within an hour, the comedic coup plot had unraveled. Opposition leader Leopoldo López, who had broken from house arrest early that morning (he was convicted of inciting deadly violence in 2014), fled with his family to the Chilean embassy and then to the Spanish embassy. Guaidó went into hiding for the   rest of the day. The Venezuelan Defense Minister Vladimir Padrino López went on national television to say that the military was standing strong with President Maduro and announced that every military base in the country was operating normally. No coup had taken place.

The next day 400,000 workers marched in a May Day rally, one of the largest pro-government mobilizations in the history of the Bolivarian revolution. Rather than the “mother of all marches,” Guaidó’s numbers paled in comparison. As the CNN reporter on the scene said, “There's a few thousand people, but my guess is Guaidó would have hoped for more. We saw Molotov cocktails being made but it's peaceful here."

In the days since the aborted coup, reports have emerged that the real coup plotters – Elliot Abrams, Mike Pompeo and John Bolton – were themselves tricked in a plot laid by Venezuelan counter intelligence. They had been convinced that Defense Minister Padrino and two other senior officials were going to defect based on discussions Abrams held with Padrino for several weeks. The day of the coup attempt, Abrams reportedly told Trump that it was a sure thing.

The US media fell in line with Guaido’s story that a coup was underway in Venezuela. The New York Times reported there had been “a predawn takeover of a military base in the heart of the capital,” and that Guaidó had made a video appeal for a rebellion from the “liberated” airbase at La Carlota. The airbase was never in the hands of Guaidó or his supporters. They never got close.

Instead, some 2,000 of Guaidó’s supporters gathered on an overpass to watch the highway below where 200 or so violent protesters – likely who were paid – were firing on the military and throwing Molotov cocktails near the air base. The foreign press reporter told me that Guaidó’s 2,000 observer supporters were well-dressed, many perched in BMW and Mercedes Benz cars. They had white cream on their faces to protect themselves from the sun and wafting tear gas. After it was over, they went to the nearby luxury Intercontinental Tamanaco Hotel and drank champagne, said the reporter who was staying at the same hotel.

In the US, the nightly news ran a film clip showing two military vehicles ramming into opposition protesters outside of the La Carlota military base. The truth is that one of the vehicles was driven by soldiers who had defected. They rammed into their own protesters to make it look like it was the government violently suppressing dissent. The drivers of the vehicle were arrested shortly after by the military as a news video clearly showed.

May Day in Caracas

The support for the Bolivarian revolution and President Maduro appears stronger than ever, judging by the May Day outpouring. One participant later told me that she had taken her mother and aunt to the rally for the first time. She said it was far different than last year’s May Day which was much smaller and mainly perfunctory. This year it was an enthusiastic day of hundreds of thousands of people celebrating a victory for their country and their revolution.

In his speech addressing the massive crowds, President Maduro announced the convening the following weekend of a national assembly of Poder Popular (Popular Power) – the system of local communal self- governance – to evaluate the economic progress of the country – and make plans for the period ahead.

Poder Popular and the Communes

The next day, our group attended a meeting of a commune in the working-class Caracas neighborhood of La Catia where discussion had been underway for several hours on proposals to present to the weekend national assemblies. The commune discussed a new communal banking system and a seed bank that would be subsidized by the government for their communal vegetable and poultry farms. The organically grown produce is sold to residents 50% below market rate.

All Venezuelan residents are able to receive at little cost a large bag of food every two weeks filled with cooking oil, rice, beans, pasta, sugar, flour, etc. It is common to see people walking through the streets with their food bag over their shoulders to take home. Despite the US sanctions and the drastic fall in oil prices, there have been no cuts to this essential food program.

Extreme poverty has decreased measurably since Hugo Chávez was elected president in 1998 from a high of 60% to 19% today. The nationalization of the country’s rich oil industry provided the resources to improve the lives of poor and working people. One example great example is new housing construction.

Delegates from communes throughout the country attended the 4-day housing conference in Caracas. Held annually since Misión Vivienda was established 8 years ago, the conference is organized to share experiences building housing in local areas as well as providing an international network on the right to housing. Representatives of 32 countries from North America, Latin America, Africa, the Middle East and Asia attended.

We learned that the housing shortage in Venezuela has been severe. In 1996, before the Bolivarian revolution, 35% of the population were without homes and a third of all homes were considered “inappropriate.” Then came the rains. A week-long torrential downpour in 2010 destroyed a large area outside of Caracas in the poorest of all states – Vargas. Many died and many thousands were left homeless. The apocalyptic disaster led Chávez to call for the launch of Gran Misión Vivienda with the goal of 5 million new homes by 2025.

Today, despite the US economic war and threats of military attack, the fall in oil prices, England’s theft of the country’s gold in British banks, the US seizure of CITGO revenues and an oil embargo, some 2,600,000 homes have been built since 2011. Title deeds have been given to a million families. Laws were passed to prevent price speculation and guarantee fair housing prices with low interest rates. “We have never cut back on our ambitious plans for housing – our long march to communal society,” said Venezuela’s Minister of Housing.

We visited Vargas to see for ourselves. It was impressive – a complete transformation of the area where 420,000 people now live. Before 2011, most lived in shacks in the hillsides. The best land sat on 37 hectares of flat ocean front owned by 4 rich families. After the rains, the government took over the flat land and today it is home to 3,200 families. Nearly the entire state of Vargas has been rebuilt with new apartment buildings providing 36,852 new homes, new schools, health clinics, beach recreation areas, a new baseball stadium, performance art arenas, day care and nursery centers.

“It is not difficult to see why Venezuela is at the center of a global war,” said philosopher and former Venezuelan UN Ambassador Carlos Lagos in a discussion with our group. He pointed to the role of Russia and China in opposing US sanctions and interventions around the world. The rightwing is moving their agenda for the hemisphere and Venezuela is the main obstacle, he said.

After 1998, when Hugo Chavez was first elected, Venezuela’s new constitution made human rights its centerpiece, said Lagos. He called it an anti-neoliberal Constitution. It prohibits privatization by law, and therefore, he said, it is not possible to privatize the country’s oil industry. In 2002, when the US backed a 47-hour coup d’état against President Chávez, the first thing that the rightwing did was to abolish the new Constitution.
It is the program of the revolution, said Lagos.

Venezuela has lost an estimated $114 billion from US sanctions that began with the Obama administration in 2014. Economists Mark Weisbrot and Jeffrey Sachs in a April 2019 report, “Economic Sanctions as Collective Punishment: The Case of Venezuela,” calculate that 40,000 Venezuelans have died between 2017 and 2018 as a direct result of US sanctions, and an additional 300,000 lives are at risk. Sanctions have prevented some 80,000 Venezuelans who have HIV from obtaining antiretroviral treatment since 2017. Most of the 4 million people with diabetes and hypertension cannot get insulin or cardiovascular medicine. The two main reasons are US sanctions that prevent the government from purchasing food and medicine, and the drastic drop in oil prices – from $163.52 a barrel in 2008 to $50.43 in January 2009.

As political writer Vijay Prashad points out in an article for Common Dreams (5/13/19), “A debate over whether it is mismanagement and corruption by the Maduro government or the sanctions that are the author of the crisis is largely irrelevant. The point is that a combination of the reliance on oil revenues and the sanctions policy has crushed the policy space for any stability in the country.”

Lagos tells us that sanctions are preventing international investments for internal development as the government is unable to purchase raw materials and equipment, and many companies are closing down. “We are in the midst of an economic collapse,” said Lagos.

On May 13th, Guaidó formerly requested the support of US military forces to overthrow the elected government of Venezuela. We in the US must do all we can to stop it. We need letters to newspapers, protests in the streets, and pressure on Congress to pass HR 1004, a bill to prevent military action against Venezuela unless approved by Congress. There are now 71 co-sponsors. Check to see if your Representative is on board: https://www.congress.gov/bill/116th-congress/house-bill/1004/cosponsors