Over the years, the team, made up of 20 to 30 women, in Chicago, at any given time, ended up facilitating at least 11,000 abortions before Roe v. Wade was passed in 1973 and made abortion a constitutional right. We're now facing an assault on women. 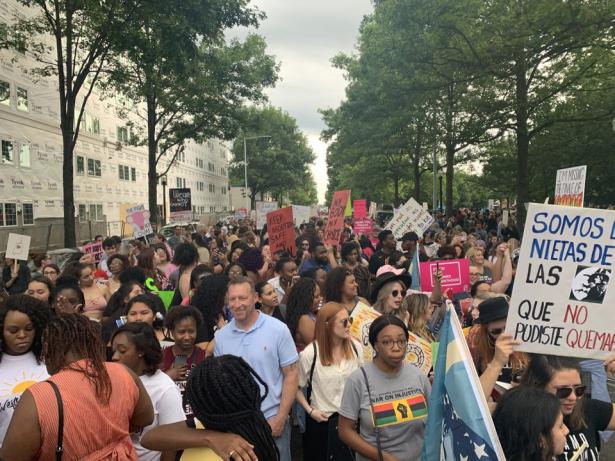 In 1965, Heather Booth, then 19, could have never imagined that helping a friend’s sister get an illegal abortion could birth a network for many women to get the medical care that was being denied to them.

At the time, Booth was a sophomore at the University of Chicago and abortion was illegal in all states. Booth had been passionately involved in the Civil Rights Movement, so when her friend confided in her that his sister was nearly suicidal because of her pregnancy, she wanted to see how she could help.

“I had never thought about the issue of abortion before,” Booth, now 73, told InsideEdition.com.

Booth was able to connect the girl with a doctor, who had agreed to perform the procedure for $500. She thought that’d be the end of it, but it wasn’t. The calls continued to pour in and Booth knew she needed to set up a system for people seeking abortions.

“I was living in a dormitory and decided to call it ‘Jane’ and told people to ask for Jane,” Booth said.

The Jane Collective was born.

Eventually, the women of the secret group graduated from connecting women with doctors who could perform the abortions to performing the abortions themselves.

Over the years, the team, made up of 20 to 30 women at any given time, ended up facilitating at least 11,000 abortions before Roe v. Wade was passed in 1973 and made abortion a constitutional right.

The recently passed abortion laws in several states, however, could threaten the decades-old ruling.

“I think we’re now facing an assault on women, an assault on women’s role in the society. Much of it being done for political reasons,” Booth said. “[Abortion is] a decision to be made by family, a physician and by the women themselves.”

A Step Back in History?

Last week, Alabama passed the strictest abortion law in the U.S. in decades, which would make abortion almost entirely illegal in the state, with only an exception if the woman’s life is at risk and none for rape and incest. Doctors could also face up to 99 years in prison if they perform one illegally.

Georgia and Missouri, among other states, have also passed “heartbeat bills,” which make it illegal to have an abortion after a fetus’ heartbeat is detected, usually around the sixth week of pregnancy. At that stage, most women don't yet know they are pregnant.

In Georgia, women would still be able to obtain an abortion up to 20 weeks in cases of rape or incest. Missouri, like Alabama, doesn't make an exception for rape and incest but extends the abortion option to eight weeks.

Although the Alabama law has been passed, it is not set to take effect for another six months. All of the bills are said to be part of a larger conservative effort to overturn Roe v. Wade in the Supreme Court.

The Alabama law is guaranteed to be challenged before it's implementation and would first go to the federal district court. It could then make it to the 11th circuit appellate court, and if a decision is appealed there, the case could be heard by the Supreme Court.

Many conservative Republicans continue to argue that it's the right decision.

“Human life has rights, and when someone takes those rights, that’s when we as government have to step in," said Republican state Sen. Clyde Chambliss, who sponsored the bill in the Senate. "When God creates that life, that miracle of life inside the woman’s womb, it’s not our place as humans to extinguish that life. That’s what I believe.”

“I am so aggravated,” said Abby Pariser, who joined the Jane Collective in 1969. “I really think that most men have really no idea how it affects women, how the possibility of pregnancy, makes women really afraid in any sexual encounter.”

The Jane Collective became a smoothly running operation into the ‘70s. The women involved called themselves “counselors,” and after being thoroughly trained, would perform dilation and curettage abortions.

They’d counsel the pregnant women about what to expect throughout the entire process and check up on them afterward.

The group had a voicemail machine set up, which women would call and leave their name, number and the date of their last period. They were then contacted by one of the women in the group.

“It was part of our philosophy to transfer power in medical situations to the patient instead of the doctor. It was a very patriarchal medical community we were dealing with so we wanted women to understand what exactly would be happening to them,” Jeanne Galatzer-Levy, who joined the collective at 20 years old, said. “We would explain how the abortion worked. And then we would call them back with a time and date and a place to go to.”

It would cost the women $100 and the collective often worked with women who couldn’t afford the procedure.

Women would show up to a rented apartment that was called “The Front."

There, they were counseled on logistics, and given antibiotics and drugs to induce labor. They were then driven to a second location where the abortion was performed.

“I assisted at abortions all the time,” Galatzer-Levy said. “I would bring a woman into the room, talk to her. When she had undressed from the waist down I would insert the speculum and give her a shot of lidocaine into the cervix and begin the process of dilation.”

Galatzer-Levy said the group never had any women who experienced complications and if they were concerned about anything afterward, the group always encouraged women to see a doctor.

“When I first joined, it was everybody you could possibly imagine among women of reproductive age. We did have occasional 10-year-olds, 14-year-olds. It was upsetting for us personally,” Galatzer-Levy said. “These children would come with their mothers because they really had no option. We had [the] rich, poor, police women, policemen’s mistresses, every possible demographic.”

The Arrests and Roe v. Wade

In 1972, several of the women, including Pariser and Galatzer-Levy, were arrested in Chicago after police were tipped off about the operation by the family member of a woman who was scheduled to get an abortion, Galatzer-Levy said.

The women were charged with 11 counts of abortion and conspiracy to commit abortion.

Still, some of the women in the group went back to performing abortions after the arrest because the need was so great.

Six months later, in January 1973, Roe v. Wade was passed and the women’s charges were dropped.

“We thought we won. We had a big party and we all went our separate ways,” Galatzer-Levy said.

“It was a relief, it meant women’s lives would be saved,” Booth said of Roe v. Wade.

Is Their Work Finished?

All these years later, however, abortion rights continue to be a source of contention in the United States.

The women of the collective and many women across the country still maintain that the government should not make the decision for a woman.

"We can make change if we organize, but we need to organize," Booth said. "So much is needed — legislative, legal, political and especially grassroots work, building our power together. We can provide the support women need for this most intimate decision in our lives."

And Galatzer-Levy believes women are capable of of making that intimate decision for themselves.

“I have never ever met that mythical woman who took getting an abortion lightly,” she said.

[Maya Chung is a digital reporter for InsideEdition.com. She is a former contributor at NBC Latino and NBC BLK. She earned a Master's degree from New York University's Arthur L. Carter Journalism Institute. In her spare time, she talks beauty and hair on her YouTube channel.]