labor The People are with Evo: A Glimpse at a New Bolivia

Rodolfo Machaca Yupanqui, the leader of the Unified Confederation of Bolivian Peasant Workers Union (CSUTCB): after being marginalized for hundreds of years, indigenous people are gaining rights. That is why we support Evo. 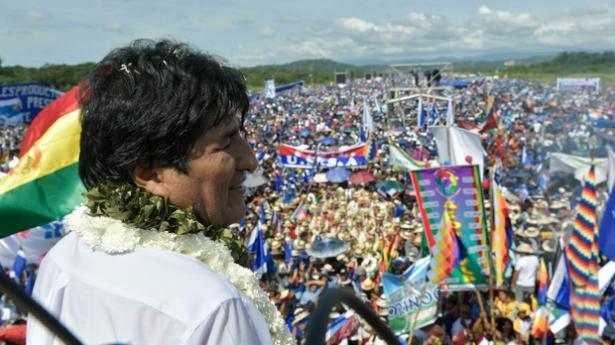 As the general elections in Bolivia are approaching and the campaign for socialist president Evo Morales is gaining vigor, Peoples Dispatch interviewed Rodolfo Machaca Yupanqui, the leader of the Unified Confederation of Bolivian Peasant Workers Union (CSUTCB). The CSUTCB is the largest peasants’ union in Bolivia. Since 1967, it has been continuously struggling for various transformative processes. President Evo Morales is also a member of this confederation.

Peoples Dispatch: What are the main agenda points and objectives of your organization?

Rodolfo Machaca Yupanqui: The primary objective is to organize people. The indigenous peasant sector has been historically marginalized and forgotten. So it was very important that our indigenous peasant grassroots movements were taken into account in the Bolivian state structure. This means having political rights, including the right of indigenous people and peasants to be a president, a member of parliament, a legislator, a judge, a attorney general, a professor or a university teacher – basically, the right to be treated on a par with any other citizen.

Social rights are the next thing we fight for. It is important to have equal rights in health care and education, without being discriminated on the basis of culture and language.

We also fight for economic rights. It is worth mentioning that we, as peasants, farmers, livestock breeders, fishermen and craftsmen, also have to have our own form of economy. We want an economy based on community and social values. We do not want a private economy or capitalism or neoliberalism. So, these are the reasons why we mobilize.

As a result of years of struggles, we have Evo Morales as the president of Bolivia. He is the first indigenous peasant to lead the country.

The second important objective is to fight for universal human rights. We, the indigenous peasant people, have our own knowledge, wisdom and experiences. So these also need to be recognized in a social environment.

As an indigenous people’s organization, we have been internationalized. We have organized at continental level, at global level with La Via Campesina and we also are members of the Social Movements of Alba. It is worth noting that all indigenous organizations and unions in the countryside, as well as in the cities – whether they be of salaried employees or self-employed, of mine workers, transport workers, factory workers, retail and wholesale traders or craftsmen –  all unite at the global level to fight for our demands. This is very useful for peasants from across the globe. The reason for structuring a common struggle at a global level is to break all those schemes of the state structure that are capitalist, oligarchic and sectoral, and to fight the governments that only serve the rich people.

In order to break these schemes, it is necessary to fight for a new model of a state that would be closer to our needs, a model of a community social state, where profound changes are adopted. In this model, the form of government and the structure of the State is inclusive for sectors that are forgotten. These are the challenges that we discuss and debate in the meetings between trade union leaders, indigenous people, peasants, workers from all over the world and this must continue progressing.

PD: What have been the significant changes brought about by Evo Morales’ government? Which are the sectors that benefited from these chages?

RMY: A major change that is an example for the whole world is that after being marginalized and neglected for hundreds of years, the indigenous people, peasants, workers and laborers have been incorporated into the state structure through the constituent assembly.

Through Morales’ reforms, these sectors have all the essential rights that the rich, powerful and strong people have. Now, even one of us can become the president. It is not just the elite, but an indigenous person and a peasant who can run the country. We have the right to be a member of the assembly, a member of parliament, a governor, a judge or a lawyer. We have the right to be part of a military academy, police academy and to manage the electoral power, which controls the democratic system in a country.

Another significant change has been the breaking with the neoliberal notion of the state that only recognizes the private sector. We have incorporated what is called the state economy, in which the state takes control of the wealth and not only regulates it, but also has administrative control.

We also implemented a community-based economy, which recognizes the economy of the poorest people and the unionized sectors. These economies have been incorporated within the state’s structure. Earlier, the private economy was the main driving force of the economy. Only the rich and the powerful could manage and head it while we, the indigenous, peasant and poor people were subjected to this model. Similarly, the societal corporatism has been strengthened instead of private corporatism. So, these are the paramount changes that have taken place in Bolivia.

The Bolivian state has also taken over the natural resources such as the petroleum, hydrocarbons and the mining industry, as well as the telecommunication, electricity and transportation sectors. We have taken control of all the strategic places and from there, whatever resources are generated for the state are invested in roads, education, construction of schools, hospitals, communication centers, universities, etc.

We are confident that in the coming decades, because of these profound advances, Bolivia will be as developed as China or any other advanced country.

PD: What can you tell us about the upcoming presidential elections in Bolivia?

RMY: Sometimes, the set of rules of a state, in the name of democracy, places limits on a president even though his administration might have been good. For example, Evo Morales has been governing the country for 12 years and they did not want him to stand in elections again because of these constitutional limitations.

We, the indigenous people, peasants, social movements and people’s organizations, demanded that the rules be changed so that a president who does positive things for the benefit of the people, should continue. We believe that 12 years are not enough for profound changes to materialize. For this reason, we are re-nominating president Evo Morales for 2020-2025. On behalf of the party [Movement Towards Socialism-MAS], the nomination has already been registered with the electoral body.

The elections are a challenge. The Latin American continent is going through a very difficult and complicated situation, where the neoliberal and fascist model is ruling again. It has returned to power in Brazil, it is there in Argentina. Ecuador had a socialist leader but his successor is actually serving the capitalists. Venezuelan president Nicolás Maduro is suffering a brutal frontal attack. The big capitalists are attacking our presidents from popular backgrounds.

We are going through difficult times, and we are hoping that there is light at the end of the tunnel and that we will set an example for the world. Only by organizing ourselves and continuously resisting without arms will democracy triumph again. These are great challenges, but they can be defeated with unity that is rooted in the diversity of social movements. The secret is in absolute resistance. If we resist, we will win for sure. A new dawn will come. We hope that in the world and in the continent, progressive presidents come into power and work for the poor, who are the most neglected people on this planet Earth.