labor ‘The Hotel is Attacking Us’: New Momentum in the Hotel Strike Wave

Hotel strikes in 2018 resulted in new agreements to increase wages and pensions. Management attempts to increase workloads remains a major concern for workers as does maintaining health insurance during seasonal layoffs. 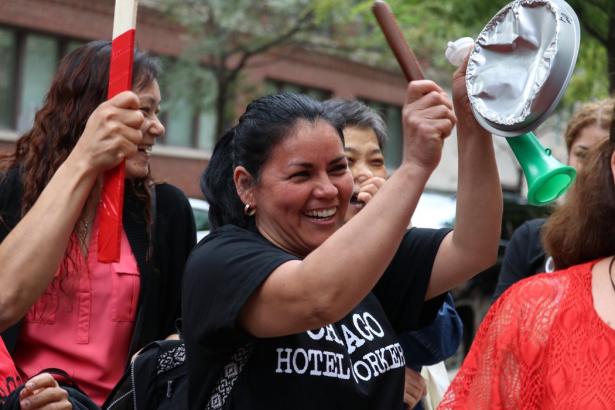 “It’s just not possible to do more work, people are already working in pain,” Gloria Tavira says regarding the Cambria hotel's push to increase the housekeeping department's workload.,

Housekeeper Gloria Tavira routinely takes pain medication to get through the day. For eleven years, the forty-eight-year-old has worked at the Cambria Chicago Magnificent Mile hotel. In that time she has dealt with multiple work-related injuries—three years ago, she even had surgery after injuring her elbow on glass while working.

Yet, the hotel, operated by Dallas-based Fillmore Hospitality, is pushing to increase the workload of the housekeeping department from cleaning thirteen rooms per eight-hour shift to fifteen. “The hotel is attacking us women who work at the hotel by trying to increase our workload,” Tavira tells The Progressive.

In early September 2018, Tavira was one of thousands of housekeepers, servers, cooks, and doormen at twenty-six hotels in Chicago represented by UNITE HERE Local 1 who walked out on strike, the largest hotel strike in the city’s history. Twenty-five of the hotels ratified new union contracts with their workers within five weeks of the mass strike. The Cambria hotel in Chicago is the remaining hotel yet to come to an agreement with dozens of their workers represented by the union.

The 2018 strikes were not only in Chicago. In October 2018, nearly 8,000 workers at Marriott hotels across the country walked out on strike, resulting in new agreements to increase wages and pensions in December 2018. Twenty-four hotels in the Los Angeles area voted to authorize a strike in December 2018—one went on a two-day strike before agreeing to a new contract, according to UNITE HERE Local 1.

Hotel workers at Hilton are also considering a strike.

Over 1,500 workers represented by UNITE HERE Local 5 at the Hilton Hawaii Village, the largest in Hawaii and the largest Hilton Hotel in the world, votedon April 26 to authorize a strike. Workers are striking for better wages that reflect the high cost of living in Hawaii.

“If this strike happens, it will be a really big deal for our community and the tourism industry as a whole,” says Paola Rodelas, a spokesperson for the union.

“For many workers at Hilton, two jobs is a norm,” says Jonathan Rezada, a bellman at the Hilton Grand Vacations timeshare. His father has worked at the same hotel for thirty years while working a second job to support their family. “As far as I can remember as a kid, I never saw him much and I always thought it was normal for parents to work two jobs.”

A day prior to the vote among Hilton Hawaii Village workers, 600 workers at the Hilton-operated Hotel del Coronado resort just outside of San Diego, California votedby 97 percent to authorize a strike.

“It has the highest room rates of any of our hotels, so we’ve felt very strongly it should have the best contract in the union; and currently Hilton is not offering us the best contract in the union,” UNITE HERE Local 30 President Brigette Browning tells The Progressive. “It’s an expensive place to live, and we need an economic package that reflects the high cost of living in San Diego.”

The senior vice president of labor relations at Hilton, Paul Ades, tells The Progressive in an email, “A strike vote is a customary tactic used during negotiations and does not mean there will be a strike at these locations. Hilton has not had any strikes with UNITE HERE anywhere in the United States in nearly ten years, and has an established track record of success negotiating fair contracts for our union team members. We are confident that Hilton and the unions soon will reach agreements that are beneficial to our valued team members and to our properties.”

Back in Chicago, eight months after first walking out, Tavira is among just thirty-five workers at the Chicago Cambria hotel remaining on strike. Others having been forced to return to work for financial reasons. About the hotel’s demand that housekeepers increase their workload, Tavira notes this is a change that no other hotel has demanded in their union contracts.

“It’s just not possible to do more work, people are already working in pain,” she says. “Last year there was a renovation in the hotel that changed the furniture so there is more cleaning to do in the rooms.” The increase in workload, Tavira explains, would result in fewer hours for current employees and possibly the loss of jobs at the hotel.

The central demand of Tavira and others in her union during the strike in September 2018 was to obtain year-round health care coverage, as many workers lose coverage when their hours are cut during the off-season between December and March. While other hotels conceded to this demand, the Cambria hotel, has held out over the issue of increasing the workload for housekeeping.

“They’ve continuously told us the only way they will agree to sign a contract with us is if we agree to a higher workload for these women,” says twenty-six-year old Jose Gonzalez, a cook at the Cambria hotel who has stayed out on strike in solidarity with the housekeepers. “These women have given their lives and career to this hotel, to better this hotel, and to move the company forward. All they can tell us is they don’t care about the well-being of their workers. All that matters to them is numbers.”

Fillmore Hospitality and the Cambria hotel did not respond to multiple requests for comment.

Michael Sainato is a journalist based in Gainesville, Florida. His work has appeared in the Intercept, The Guardian, The Nation, Vice.com, and Huffington Post.