The House bill, which has unified support from the state’s unions, would let unions charge non-members “reasonable costs” for representing them in a grievance or arbitration proceeding. 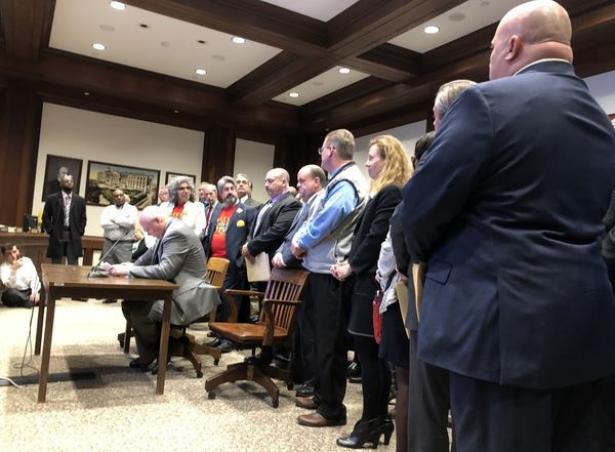 The Massachusetts House on Wednesday passed a bill that would let public sector unions charge non-members fees for representing them in grievances.

“It prevents hard-working, dues-paying members from footing the bill for an employee who does not share in the obligation to meet those costs by paying any money into the union,” said Rep. Paul Brodeur, D-Melrose, chairman of the Joint Committee on Labor and Workforce Development. “It stands for the fundamental premise that you can’t get something for nothing.”

The bill, H.3854, passed 155-1. It would also give unions other rights aimed at strengthening their presence in the workplace.

The bill is a response to the U.S. Supreme Court’s 2018 decision in Janus vs. AFSCME, which ruled that government workers cannot be forced to pay union dues.

Until the Janus decision, government workers whose workplaces were unionized did not have to join the union, but did have to pay “fair share” or “agency” fees to account for the fact that all workers benefit from the contract negotiated by the union.

The House bill, which has unified support from the state’s unions, would let unions charge non-members “reasonable costs” for representing them in a grievance or arbitration proceeding. While unions would still be required to negotiate contracts on behalf of all employees of that workplace, they would be allowed to offer other “legal, economic or job-related services or benefits” to union members only.

Unions would also be granted certain rights, including the right to meet with members at their job site during the workday to discuss complaints and grievances; to conduct union meetings at the office during lunch breaks or non-work hours; to meet with all new hires within 10 days; and to use a public agency’s email system for union business.

“The Janus case was a major change to the landscape of state collective bargaining laws, and we just think it’s important to in light of that change to update our state collective bargaining laws to ensure that unions can continue to effectively represent the workers we represent,” said John Drinkwater, legislative director of the Massachusetts AFL-CIO.

Many unions already have some of these rights through their collective bargaining agreements, but this would codify them and ensure no employer can ban the practices.

Brodeur said current law only provides home addresses and landlines to unions. “That doesn’t work anymore, that’s not the way people communicate in the modern world,” Brodeur said. He described the change as updating the law “so there’s fair access and better communication.”

Opponents of the bill worry about workers’ privacy and about whether the bill would let unions harass or intimidate workers to get them to join.

Paul Craney, a spokesman for the Massachusetts Fiscal Alliance, wrote in a letter to House Speaker Robert DeLeo, D-Winthrop, that the bill would go further than “fixing” the Janus decision by giving unions access to government workers’ personal information.

“There is no other explanation for this besides a means to harass non-union state employees,” Craney wrote.

Craney said the bill represented a “backdoor attempt by union bosses to have their work and communication subsidized by the taxpayers,” because unions would be allowed to access public agency email systems and meet with employees at their workplaces.

Jim Stergios, executive director of the Pioneer Institute, a free market think tank, called it “shocking” that lawmakers would support the bill. He said giving out personal contact information of workers — and their family members — could lead to union harassment. He worried that unions would force a new employee to meet with them before or after work when the employee has other obligations.

He also questioned a provision requiring a union representative to sign off on any agreement settling a grievance between an employee and an employer, even if the employee is not a union member.

Stergios said he anticipates that if the bill becomes law, it will be challenged in court.

Versions of the bill have been in the works since the end of the last legislative session in July 2018. But DeLeo said he would not bring a bill to the floor until it had unanimous agreement of all the state’s unions.

The debate on the House floor was marked by strong pro-labor rhetoric.

Rep. Marjorie Decker, D-Cambridge, said the Janus decision was part of a “carefully financed campaign against democracy” and against workers.”

The House rejected several amendments that would have limited the bill in various ways — stopping unions from obtaining personal information without workers’ consent, not giving unions workers’ cell phone numbers, eliminating unions’ right to use public email systems, prohibiting text messaging from unions without permission, and other proposals.

The bill now goes to the Senate for consideration.