Martin Scorsese blends fact and fiction for a playfully experimental film about the most freewheeling tour Bob Dylan ever did. The true shock of Rolling Thunder Revue is in how good, how alive, Dylan is on stage. 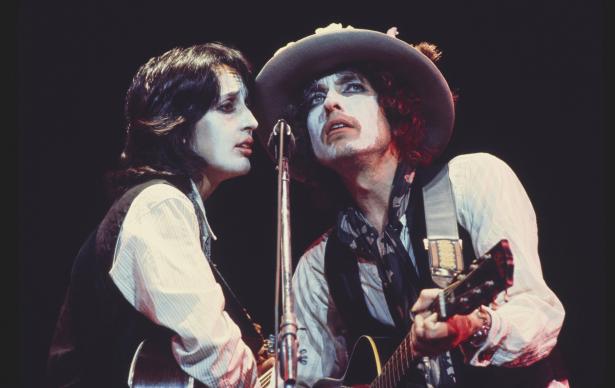 There’s never been and may never be a musician on whom more words have been exhausted in an attempt to explain What It All Means, but if the scribes who’ve devoted their lives and careers to poring over Bob Dylan’s every utterance had simply asked him themselves, they could have saved us all a lot of time. “It’s about nothing,” Dylan exclaims at the beginning of Rolling Thunder Revue, the Martin Scorsese documentary about his legendary 1975 to 1976 tour. “It happened so long ago I wasn’t even born.”

Dylan emerged through the folk-music boom of the 1960s as an heir to Woody Guthrie, a protest singer inveighing against social injustices who left his audiences no doubt as to the conclusions he wanted them to reach; you didn’t listen to “Masters of War” or “The Lonesome Death of Hattie Carroll” and wonder which side you were meant to be on. But he grew uncomfortable with that mantle almost from the moment it was placed upon him, and by the time of the 1965 tour chronicled in D.A. Pennebaker’s Dont Look Back, he was spitting sly venom at anyone who dared ask what his songs were really about. He withdrew from touring entirely the following year and didn’t return until 1974, playing a string of stadium and sports arenas with the Band. But that kind of large-scale presentation provided insufficient opportunities for chaos, so the following year Dylan and theater director Jacques Levy conceived the Rolling Thunder Revue, a shaggy, constantly mutating roadshow in smaller venues, with dates announced by hand-distributed flyers and tickets sold on the cheap—essentially the pre-internet equivalent of a pop-up show. Glam guitarist Mick Ronson was drafted as part of the house band, and Joan Baez and the Byrds’ Roger McGuinn joined a lineup of performances that, at points, also included Joni Mitchell and Nashville star Ronee Blakley. (Bruce Springsteen and Patti Smith were also asked to drop by, although they never did.)

As if that weren’t enough to keep track of, Dylan was also making his debut as a movie director, shooting footage for Renaldo & Clara, a genre-blurring, interpretation-defying four-hour movie about a crumbling marriage in which Dylan and his soon-to-be-ex-wife Sara take the title roles. (The part of “Bob Dylan” is taken on by singer Ronnie Hawkins.) That movie is a fascinating and bewildering mess, going from electrifying concert footage to diverting documentary interludes to exasperating dramatic scenes. It was released in 1978 and has rarely been seen since. But its spirit clearly animated Scorsese, who has fashioned an ingenious hybrid of fact and fiction that embodies the vital, slipshod, thrilling, confounding essence of the Rolling Thunder Revue itself.

Apart from Dylan, everyone who appears in Rolling Thunder Revue—which is subtitled “A Bob Dylan Story”—is credited as if they’re playing a part: Baez is “the Balladeer” and violinist Scarlet Rivera is “the Queen of Swords.” But some parts are more scripted than others. The documentary filmmaker Stefan van Dorp, who offers detailed recollections of following Dylan on the road, is a wholly invented character played by actor Martin von Haselberg. The congressman who recalls being fixed up by Jimmy Carter with tickets to one of the Revue’s shows is Jack Tanner, the central figure in Robert Altman’s faux documentary Tanner ’88. And while Sharon Stone is undoubtedly a real person, she wasn’t a teenage groupie whom Dylan hit on by pretending he’d written “Just Like a Woman” about her.

These fabrications are harmless, except perhaps to people who grow frustrated trying to stream the rest of Stefan van Dorp’s oeuvre, but they also don’t serve much of a point beyond churning up a cloud of dust around the entire notion of truth. Dylan didn’t get the idea to smear his face with white paint before going onstage from the heavy metal band Kiss—it came from commedia dell’arte and Marcel Carné’s Children of Paradise—but there’s no harm done in pretending otherwise, and if Dylan wants to paint himself now as someone who was still down with the kids in his mid-30s, who’s to stop him? (Given that he fabricated chunks of his own autobiography and seemingly plagiarized portions of his acceptance speech for the Nobel Prize in literature from SparkNotes, you’d be a fool to take anything that comes out of Dylan’s mouth at face value.) But they also don’t add anything meaningful. They’re not as provocatively boundary-blurring as Robert Greene’s documentaries about performance or as wittily subversive as a good episode of Documentary Now! They just distractions from the main event, like an opening act who’s overstayed their welcome.

Fortunately, that main event is astounding. In an (apparently nonfictional) interview, Baez describes the “Rolling Thunder energy” that Dylan engineered for the tour, and while we catch glimpses of other performers, the movie views the entire enterprise as an engine built to push Dylan out of his comfort zone. There’s an edge to his singing voice here, a combination of desperation and defiance, especially on the songs, like “Isis” and “Hurricane,” that his audience had never heard before. (Both would end up on the album Dylan released the following year, Desire.) Scorsese omits the most famous footage from the tour, a single-take close-up on Dylan’s face as he plays a solo version of “Tangled Up in Blue,” and in some of the songs that also appear in Renaldo & Clara, he chooses alternate angles that favor Dylan less and the group dynamic more. But with rare exceptions, like a house party at which Dylan plays rhythm behind Joni Mitchell as she takes the newly written “Coyote” out for a spin, it all drives back to Bob.

Although Dylan seems like a reluctant subject, he was the one who arranged for the tour to be documented in the first place, for the cameras to be trained on him then and now. He gives off the air of someone who’s about to storm out of an interview, but he stays, and he keeps talking. Despite its promise to find fact in fiction, the movie’s made-up characters offer little in the way of ecstatic truths, but there’s a moment when Stefan van Dorp says he realized that the way to keep Dylan from clamming up was to never ask him a direct question. Rolling Thunder Revue leaves it to us to ask the questions, or just sit back and enjoy the show.

Netflix released “Rolling Thunder Revue” on Netflix and in select theaters on June 12.

Sam Adams is a Slate senior editor and the editor of Slate’s culture blog, Brow Beat.