Will Someone Please Explain to Trump How Tariffs Work?

Tariffs are not paid by foreign governments, such as Mexico and China, or by Mexican or Chinese companies exporting goods to the U.S. Instead, they are paid for by the American company importing the goods. 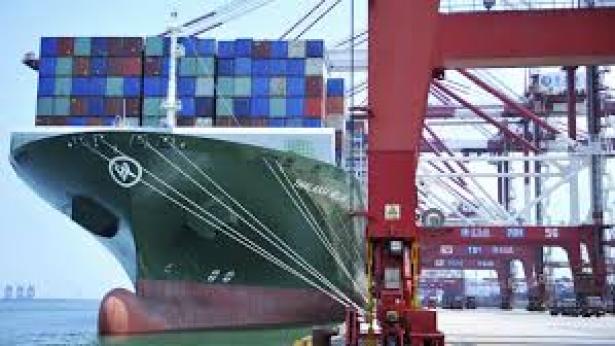 A ship hauls containers at a container port in Qingdao in eastern China's Shandong province Friday, July 6, 2018.,Chinatopix via AP

One of my favorite phrases from Mark Twain’s tales of Huck Finn and Tom Sawyer is the description of them “telling stretchers” when they were cornered with uncomfortable or damning questions. They stretched the truth in desperation while they tried to survive as a pair of orphan boys in a dangerous and unpredictable world.

But President Trump’s “stretchers” are so numerous and self-serving that we can only conclude they are either highly-calculated or a product of willful ignorance. General fatigue forced me to give up being outraged by his roughly 10,000 documented examples of straying from the truth since his election. But the current proposition that tariffs are helping him win international trade and policy wars while enriching the U.S. is simply too preposterous to let slide into the “lie dumpster” with all its relatives.

May 10, 2019: “Tariffs are NOW being paid to the United States by China of 25% on 250 Billion Dollars worth of goods & products. These massive payments go directly to the Treasury of the U.S.”

June 9, 2019: If Mexico doesn’t cooperate on border issues, .” . . we can always go back to our previous, very profitable position of Tariffs.”

I didn’t have the finest education as a child, but I believe it was in grade school that I learned about tariffs and how they worked. My early understanding is confirmed by every modern source, from Encyclopedia Britannica to Barron’s, from investopedia.com to Tax Policy Center.

Tariffs are not paid by foreign governments, such as Mexico and China, or by Mexican or Chinese companies exporting goods to the U.S. Instead, they are paid for by the American company importing the goods. Any money from tariffs that goes directly into the U.S. Treasury is paid by American importers, both manufacturers and retailers. And we all know who pays in the end. Manufacturers and retailers don’t simply reduce their own profits by a large percentage (which would be a bad proposition on its own), but pass the increased costs on to American consumers — you and me.

If there is such a thing as a “profitable position” on tariffs, it is funded by American consumers who are forced to pay higher prices. The chain of events in international trade may take months or years to take effect, but eventually tariffs act as a tax on ordinary consumers through higher prices while the government collects the proceeds from the importers. A study by economists at the Federal Reserve Bank of New York, and Princeton and Columbia Universities sets the current cost of the Chinese tariffs for consumers — you and me — at $1.4 billion a MONTH at the end of 2018.

Insiders in the Trump administration have reported that the president cannot or will not accept new or different information if it conflicts with one of his long-held beliefs. This may be the case with tariffs, that reality conflicts with his “gut” belief and that, again, he goes with his gut.

But what I find truly unconscionable are the actions (and non-actions) of those in the administration who learned somewhere along the line from grade school to grad school that Trump’s statements and positions on tariffs are based on misunderstandings or lies. Even though Greenfield native Kevin Hassett is leaving his position as chairman of White House Economic Advisors, and has been recently critical of tariffs for our economy, he continues to maintain that American consumers won’t bear the greatest burden of the tariffs. Instead, he predicts that it will be businesses that do. This explanation is just as weak as the trickle-down theory: the profits from corporate and top bracket tax cuts never really trickled down. The idea that businesses will assume the costs of the tariffs without passing them on to consumers is just as probable.

During his two years on the job, Hassett and all the others in the administration have allowed Trump to lie about the collection of tariffs without making any clarifying statements. They have followed Orwell’s 1984 black-is-white approach, thriving in the midst of an organized attack on the minds of American voters and citizens. This “China and Mexico are paying tariffs to the U.S.” lie seems just too big and obvious to be swallowed, but so far, it still lives in the headlines.

Allen Woods is a freelance writer and author living in Greenfield, Ma. Comments are welcome at awoods2846@gmail.com.
Subscribe to Portside