Three weeks after appearing to lose her re-election bid, Barcelona's leftist mayor Ada Colau won another four-year term Saturday. Barcelona was not the only city that had elected a "municipalist" government. 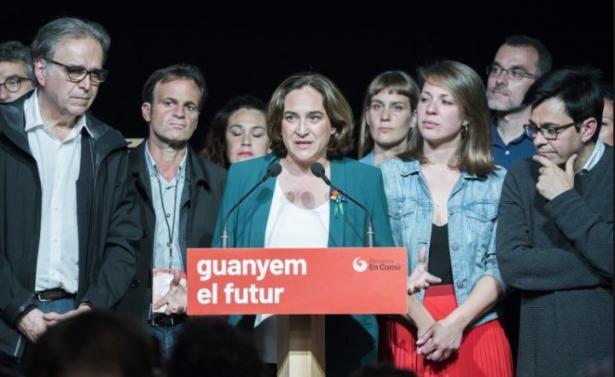 Colau narrowly lost the popular vote (21.3% to 20.7%) on May 26 to Ernest Maragall of the Republican Left party, which calls for Catalonia — Spain’s largest and wealthiest province and home to Barcelona — to secede and become its own country. Because Maragall fell short of winning an outright majority, the election went to the 41-member City Council where an alliance of three parties gave Colau the support she needed to win.

In addition to receiving 10 votes from Barcelona en Comú, the party she leads, Colau cobbled together a majority by receiving eight votes from the Socialists and three from the conservative pro-European Union party of Manuel Valls. Both Valls and the Socialists oppose Catalonian independence. Colau has refused to support or oppose the secessionist movement while criticizing the Spanish government’s crackdown on its leaders.

Colau became Barcelona’s first woman mayor in May 2015, winning a surprise victory on the Barcelona en Comú ticket. The party grew out of the Plataforma de Afectados por la Hipoteca (Platform for People Affected by Mortgages), which campaigned against evictions and foreclosures by “vulture” investors and the 15M or Indignados (angry ones) movement, a Spanish counterpart of Occupy Wall Street

Barcelona was not the only city that had elected a “municipalist” government. So had Zaragoza, Madrid, La Coruña, Cadíz, Valencia and others. Their new mayors hadn’t depended on big-money support to run their campaigns. They had no previous institutional experience but wanted to create a coalition of cities that challenged the usual way of doing politics and put progressive social values at the center.

In its first four years in City Hall, Barcelona en Comú set up a sustainable public energy company that provides light to over 20,000 homes, a publicly-owned dental clinic that offers affordable prices and the first municipal LGBTQ center in the city. It enacted a measure requiring 30 percent of new buildings be used for affordable housing, created an anti-eviction unit in the city’s government and regulated tourist apartments and Airbnb. It also held meetings in the city’s neighborhoods between residents and city officials every 15 days.

“People actually believe in Barcelona en Comú,” says Nelini Stamp, national organizing director of the U.S.-based Working Families Party. “I think fundamentally, people have a sense of power. It’s become a political home for folks. Political homes don’t come easy and once you’re in it, it’s not easy to take away.”

For this year’s election, Barcelona en Comú revived a tactic not used in Spain since the late 1970s: door-to-door canvassing. Labor unions had used it to get their ideas out in the transition after the death of General Francisco Franco, dictator for 39 years, in 1975. But in the decades after that, campaigning went back to being done exclusively by party organizations and professionals.

Inspired by the campaigns of American democratic socialists Sen. Bernie Sanders and Rep. Alexandria Ocasio-Cortez, the party enlisted Stamp to help organize its door-to-door canvassing operation and other electoral strategies. By the end of the campaign, the volunteers had knocked on over 21,000 doors and talked to more than 5,000 people in the city of 1.7 million people. In nine months, the party’s volunteers went from using photocopied maps, pens and papers to an app made especially for going door-to-door. The app enabled people to canvass independently, whenever they wanted to go door-knocking in their own neighborhood.

“The three things that I said to Barcelona en Comú is that the electoral strategy had to be fun, easy and offer a sense of community, and that you needed infrastructure to make these things possible,” Stamp says. The party released two songs: “Filla Del Guinardó: Rumba per Ada Colau,” a collaboration by local musicians Nacho Vegas, Andrea Motis, Marinah, Miqui Puig and Queralt, and Caderas Crew’s “Ada Is in Da House.” The latter, a reggaeton number, was accompanied by a cartoon video that depicted the mayor in a red “Smash the Patriarchy” sweatshirt and boasted she had “el poder de pussy,” the power of pussy.

A choir of volunteers was put together that sang songs such as the antifascist anthem “Bella Ciao” at Colau’s campaign events. And a group of over 40 people from all over the world who came to support her campaign were nicknamed “the Brigade,” after the Lincoln and International Brigades who came from abroad to help fight Franco’s fascist regime during the Spanish Civil War of 1936–39.

On the night of May 26, Colau and Barcelona en Comú hosted their election night watch party in the working-class neighborhood of Sant Andreu. Despite months of enthusiastic campaigning, the mood was different from the party held in the same place four years before, on the night of Colau’s historic upset victory.

Hundreds of people stood in front of the giant TV screen with tense smiles watching a newscaster call out the votes from different cities. People sipped their beers and checked their phones compulsively looking for updates. “Cádiz just came in, Kichi is staying as mayor!” someone said. People nodded at each other with the hope that if Cadiz re-elected its progressive mayor, it was a good omen for Barcelona. Barcelona en Comú’s executive team paced in and out of the room.

The final results did not come in until almost midnight. In addition to the municipal and other local elections, Spanish citizens were also voting in the elections for the European Parliament, where the far right made its way in through Spain, France and Britain’s Brexit Party. When the results came in for Spain’s two biggest cities, not only did it Colau appear had lost in Barcelona to the Catalan nationalist party, but Madrid mayor Manuela Carmena was defeated by a coalition of three right-wing parties.

The Barcelona results revealed a strong current of support for Catalonian nationalist politics. This was catalyzed by the Catalan independence referendum two years ago and the trial and detention of 12 political leaders accused of “rebellion” and “sedition” for supporting the pro-independence vote, which the Spanish government refuses to recognize.

Colau, instead, offered a vision of participatory democracy geared toward helping improve the lives of ordinary people in tangible ways. For her second term, she has promised to create a public mortuary and finish the construction of a tram that runs through the city. She will also keep regulating the use of tourist apartments and the investments of predatory vulture funds and says she will bring back the yellow bows in support of the Catalan political prisoners that the Spanish government demanded be taken down from city hall. She and Barcelona en Comú will have another four years to work on realizing these goals only now in coalition with the Socialists and in the critical eye of the nationalist parties from the opposition.

[Elia Gran is the Social Media Editor of The  Indypendent. She is a Spanish, New York-based photojournalist. She has written or collaborated with various radio programs and journals such as The Nation, WBAI radio, DemocracyNow!, The New York Times, Periódico Diagonal, La Directa and Eldiario.es. In Barcelona, Spain she was involved in organizing local media, especially through radio programs and local publications, to try to talk about those issues less present in mainstream media. Her interests focus mainly on human rights issues and social movements. She considers herself an activist and is part of the Marea Granate https://mareagranate.org organization in NYC which, together with other worldwide grassroots communities, is creating a global network of collaboration.]

Give as a monthly sustainer or subscribe to The Indypendent and support independent journalism.