No War with Iran

We must demand Congress prevent the Trump Administration from going to war with Iran. To that end, United for Peace & Justice has partnered with Veterans For Peace, a UFPJ member group. 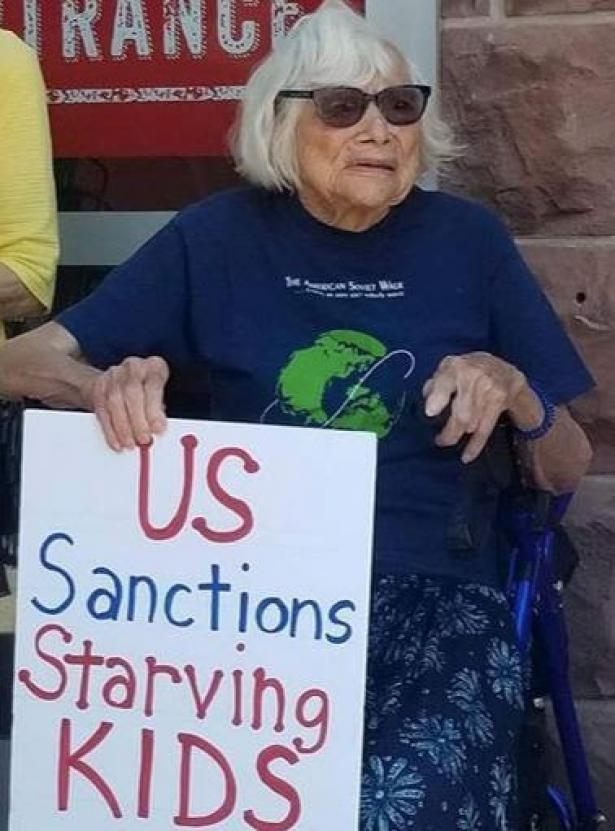 Veterans for Peace member, Sally Alice Thompson has been Fasting Against Sanctions and Siege since June 16th. , Veterans For Peace

United for Peace & Justice condemns the current push for war with Iran. We know that the United States went to war with Iraq based on lies and it looks like the Trump Administration is using the same playbook to convince Americans that Iran is a mortal threat.  War in Iraq, or anywhere else in the region, has not brought peace, democracy or freedom but death, destruction and chaos.   War with Iran, a much larger and united country, would be catastrophic.

We Must Take Action. We must demand Congress prevent the Trump Administration from going to war with Iran.   To that end, United for Peace & Justice has partnered with Veterans For Peace, a UFPJ member group.

Please read the Message and Call to Action from Veterans For Peace.
Veterans For Peace firmly opposes U.S. attempts to increase tensions in the Persian Gulf and create the conditions for war against Iran.

The U.S. has created ongoing tensions with Iran by leaving the Iran Nuclear Deal, by imposing punishing economic sanctions, and by making questionable accusations against Iran.  Veterans know first-hand how dangerous lies and exaggerations can lead the American public into war.

It is imperative that the U.S. immediately begins seeking diplomatic solutions to conflicts instead of creating pretexts for war.

Veterans For Peace calls on the U.S. to:

Draw down all its military forces from the Persian Gulf

What You Can Do
Help Us by Taking Action Now!

Send a Letter to Congress
Congress needs to hear from YOU! If the march to war is not halted, the Iranian people’s suffering will only further increase and the U.S. will find itself bogged down in another costly war of choice. Congress must block this administration’s path to war and push to return the U.S. to compliance with the nuclear deal and the negotiating table without delay. Click Here to Take Action!

About Face: Veterans Against the War, created this script:
My name is _________ and I’m a constituent residing in _________. I’m calling today because it’s time for Congressmember/Senator _________ to publicly declare their opposition to this administration’s drive to an unauthorized war with Iran. The administration has gotten us to this point by stepping away from the Iran nuclear deal. Ratcheting up military tensions with Iran is unacceptable.

Fast Against U.S. Sanctions
Veterans for Peace member, Sally Alice Thompson has been Fasting Against Sanctions and Siege since June 16th. Sally is 95 years old and she is on a hunger strike for the child victims of the U.S. government’s sanctions and war mongering on the countries where they live, Yemen, Syria, Iran, North Korea, Cuba, Venezuela.

Sally Alice said, “I am fasting because I empathize with the many hungry children of the world, so I am joining them in their suffering. I am outraged that our country is engaging in sanctions and sieges that result in starvation of babies and children. I am profoundly saddened that my government interferes in the affairs of other countries, refusing to acknowledge their sovereignty and to respect their dignity.”

She invites anyone who shares these feelings to join her in her fast, by skipping a meal or fasting for a day or longer. She would like to know if anyone joins her! Please contact her at sally-aliceanddon@juno.com.

Take to the Streets!
It's important to be visible during this time to show our opposition to war! Join in or initiate public protests or vigils against war in Iran! If you do take action, please email press@veteransforpeace.org!

Thank You for Working for Peace!