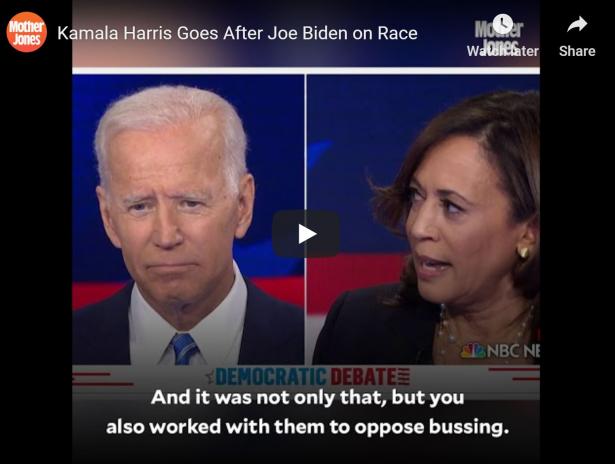 Kamala Harris wasn’t going to miss her chance. After a back-and-forth over police shootings of African-American men midway through Thursday’s Democratic presidential debate, NBC moderator Chuck Todd was preparing to change the subject when the California senator interjected.

Harris, the only black candidate on the stage, started talking about growing up in the Bay Area in a neighborhood where one white family wouldn’t let their kids play with her. And then she turned to former Vice President Joe Biden and referred to his recent comments about working with segregationist senators early in his career.

“I do not believe you are a racist,” she began, “and I agree with you when you commit yourself to the importance of finding common ground. But I also believe, and it’s personal and it actually—it was hurtful, to hear you talk about the reputations of two United States senators who built their reputations and career on segregation of race in this country.”

Biden, standing a few feet away, could only look on grimly as Harris pivoted to an issue she and her campaign had evidently prepared for—his work in the 1970s to block the federal government from desegregating public schools via busing.

“There was a little girl in California, who was part of the second class to integrate her public school. And she was bused to school every day. And that little girl was me.”

Biden paused for the applause to subside, and then he told Harris she was wrong.

“In terms of busing, you would have been able to go to school in the same exact way because it was a local decision made by your city council. That’s fine. That’s one of the things I argued for, that we should be breaking down these lines.”

“Do you agree today that you were wrong to oppose busing in America then?” Harris asked.

“I did not oppose busing in America,” Biden said. “What I opposed was busing ordered by the Department of Education, that’s what I opposed.”

The exchange lasted about four minutes, but it was perhaps the most intense moment of the Democratic primary so far. And it’s a moment that might linger for a lot longer still, because Biden’s explanation of his record doesn’t pass muster. He did, in fact, oppose busing in America. He argued against the idea forcefully, as an example of liberal overreach, and evidence of the ways in which reformers had “lost our bearings since the 1954 Brown vs. School Board desegregation case,” as he told one interviewer.

As my colleague Hannah Levintova recounted in April:

During one debate on the Senate floor, Biden said, “I have become convinced that busing is a bankrupt concept,” as he backed an anti-busing measure sponsored by avowed segregationist Sen. Jesse Helms. When a federally mandated integration program was set to begin in Biden’s home state in the late 1970s, the Delaware senator co-sponsored an amendment, tacked on to an education appropriations bill, which would have limited courts’ ability to order busing and imposed a halt on all pending busing orders around the country. The Washington Post at the time called it “the most far-reaching antibusing measure to receive serious consideration in the Senate.” (It failed by a slim margin.)

Biden’s argument was that busing was unfair to white students who would have to go to sub-standard, predominantly black schools. He believed it crossed a line that civil rights reformers should respect and acknowledge. Here’s what he told a Delaware newspaper in 1975:

The new integration plans being offered are really just quota systems to assure a certain number of blacks, Chicanos, or whatever in each school. That, to me, is the most racist concept you can come up with. What it says is, “In order for your child with curly black hair, brown eyes, and dark skin to be able to learn anything, he needs to sit next to my blond-haired, blue-eyed son.” That’s racist! Who the hell do we think we are, that the only way a black man or woman can learn is if they rub shoulders with my white child?

He rejected the argument that “In order to even the score, we must now give the black man a head start, or even hold the white man back, to even the race.” These are not technical arguments about the education department’s role in things, although that was the defensive mechanism employed by Biden to defeat it. They are arguments about the idea of busing—exactly like Harris claimed.

When the Washington Post reported those comments in March, the paper asked Biden spokesman Bill Russo for the candidate’s position on busing today. The response was that Biden’s position hadn’t changed—he thought busing was a bad idea: “He never thought busing was the best way to integrate schools in Delaware—a position which most people now agree with,” Russo told the Post. “As he said during those many years of debate, busing would not achieve equal opportunity. And it didn’t.”

Biden tried to argue on Thursday that his opposition to busing at a federal level was unrelated to Harris’ own educational experience. In other words, if a school district somewhere outside of Delaware decided to employ the busing system, that was their prerogative. But as Harris noted, the whole impetus for federal intervention on civil rights is that local governments didn’t want to get in line and that left to their own devices they were in no hurry to desegregate their schools.

“Because your city council made that decision, it was a local decision,” Biden said.

Biden tried to respond, but eventually he threw up his hands and cut himself off. “My time’s up,” he said.

Perhaps Kamala Harris thought so too.

Tim Murphy is a senior reporter at Mother Jones. Reach him at tmurphy@motherjones.com. Twitter.

DOES IT FEEL LIKE POLITICS IS AT A BREAKING POINT?

It sure feels that way to me, and here at Mother Jones, we’ve been thinking a lot about what journalism needs to do differently, and how we can have the biggest impact.

We kept coming back to one word: corruption. Democracy and the rule of law being undermined by those with wealth and power for their own gain. So we're launching an ambitious Mother JonesCorruption Project to do deep, time-intensive reporting on systemic corruption, and asking the MoJo community to help crowdfund it.

We aim to hire, build a team, and give them the time and space needed to understand how we got here and how we might get out. We want to dig into the forces and decisions that have allowed massive conflicts of interest, influence peddling, and win-at-all-costs politics to flourish.

It's unlike anything we've done, and we have seed funding to get started, but we're looking to raise $500,000 from readers by July when we'll be making key budgeting decisions—and the more resources we have by then, the deeper we can dig. If our plan sounds good to you, please help kickstart it with a tax-deductible donation today.

Thanks for reading—whether or not you can pitch in today, or ever, I'm glad you're with us.