The left-wing party’s embrace of austerity created the conditions for a parasitic and cruel oligarchy to return. 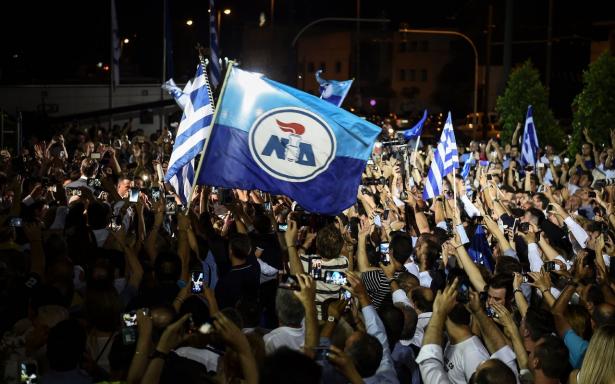 The Greek right is back: greedier, uglier and more focused than ever. The incoming New Democracy government is determined to reclaim full control of the state on behalf of the most parasitic segment of Greece’s oligarchy and, of course, of our country’s ruthless creditors.

Kyriakos Mitsotakis, the new prime minister, is a scion of one of the dynasties responsible for Greece’s perpetual bankruptcy, corruption and subservience to the Atlanticist oligarchy-without-borders. Tellingly, he has surrounded himself with, on one side, apparatchiks connected to vulture funds and failed banks and, on the other, ultra-nationalist former fascists.

Together, Mr Mitsotakis’ motley reactionaries plan to unleash a fresh class war against a people who have already lost almost everything, against minorities, against our environment, against common decency.

How did this happen? Four short years ago, Greek voters gave Syriza, the party of the radical left, a mandate to unseat the oligarchs and confine New Democracy to its rightful place — the dustbin of history. On 25 January 2015, caught up in the moment’s excitement, I quoted from Dylan Thomas to convey a message of hope to progressives across the globe: “Greek democracy,” I wrote, “today chose to stop going gently into the night. Greek democracy resolved to rage against the dying of the light.”

So, what went wrong? What was it that allowed the restoration of an authoritarian, incompetent regime that wrecked Greece before turning it into a harsh debtor’s prison from which emigration was, and remains, the only escape? When did my fellow Greeks stop raging against the long night of our debt bondage? The answer is: the night of Sunday 5 July 2015.

The night had begun brilliantly. The Greek people had flocked to polling stations to deliver a resounding “No” in a referendum called by our government at short notice. That brave No was addressed to Greece’s troika of creditors (the European Central Bank, the European Commission and the International Monetary Fund) who, on 25 June 2015, had delivered a callous ultimatum to the nation: succumb to new, inhuman austerity measures in exchange for another huge credit card from which to draw funds, or risk being thrown out of the euro and forced to transition to a new national currency.

The vast majority of the 62 per cent who said No to the troika’s ultimatum knew exactly what they were saying and the risks involved in saying it. Disingenuous commentators try to portray our people as delusional, citing what they regard as a “contradiction”: most of those who voted No did not want Greece to leave the euro. While this is true, preferring to stay in the euro and voting No to those threatening us with Grexit is as much of a contradiction as saying that, in 1939, the people of Britain craved peace but at the same time backed Winston Churchill’s determination to defend the nation against the Axis’ aggression.

What the people of Greece had said to us, their government, in that 2015 referendum, made perfect sense: “We don’t want to leave the euro or to clash with the European Union. But, if the European Union is demanding of you, of our government, the intensification of the austerity-insolvency doom loop that forces our youngsters to emigrate and the expropriation of what is left of our public assets, don’t you dare surrender — even if Grexit is the price we must pay.”

That night, while our people were out on the streets celebrating their remarkable victory, the political representatives of Greece’s oligarchy were in tatters. The leader of New Democracy resigned, the party’s cadres wallowed in deep despair, the oligarchy they represented was in a state of panic. Alas, they worried unnecessarily. For at the same time, a coup against the people was being hatched in the office of my colleague, the prime minister.

The moment I walked into the office of Alexis Tsipras, he told me he had decided to fold, to ignore the people’s No, and to side with New Democracy in order to pass through parliament the bills by which Greece would, again, surrender to the troika. After I failed to dissuade him, I resigned as minister of finance. A few hours later, Mr Tsipras convened a meeting with the acting leader of New Democracy, and the leaders of the other pro-troika parties, whose votes he needed in parliament to pass the third bailout. It was at that moment that New Democracy was retrieved from history’s dustbin and placed on a track leading, with mathematical precision, to election victory.

Since that night, Greece’s parliament has been the stage for a four-year long tragicomedy: Syriza MPs passed austerity and fire-sale bills with which they disagreed, while, on the other side, New Democracy MPs voted them down — in spite of agreeing with them. How my former colleagues convinced themselves that this would end in anything other than a devastating defeat for Syriza is beyond my comprehension.

Syriza unconditional surrender to the troika would have sufficed to revive New Democracy. Alas, Mr Tsipras’ government went to further lengths to alienate the progressives that elected him by surrendering on every imaginable front. His unforced submission to the status quo demonstrated a facility for casually betraying every one of the left’s most cherished principles.

By endorsing Angela Merkel’s inexcusable refugee deal with Turkey’s increasingly dictatorial president (effectively bribing Recep Erdoğan to allow Europe to violate its legal obligations to refugees), Mr Tsipras destroyed the soul of Syriza followers for whom the defence of the wretched of the earth was essential.

By divvying up lucrative television licences between traditional oligarchs and shady upstarts close to Mr Tsipras’ circle, another leftist principle was traduced. The final ignominy came when Mr Tsipras appeared on television with Binyamin Netanyahu, hailing a new alliance between Greece, Israel, Cyprus and oil multinationals, with President Trump’s active support, jointly to exploit the Eastern Mediterranean — while introducing fracking in Epirus and surrendering Thrace and Eastern Macedonia to multiple gas and oil pipelines. For a party that had co-opted the Greek Greens, on the promise of promoting an environmentalist agenda, it was a capitulation more momentous than even that of 5 July 2015.

One of the insights on evil I owe to my father was his chilling account of how, while in a concentration camp for leftists in the late 1940s, their fascist torturers actively sought to break them and have them torture their comrades in return for perks. In 2015, Mr Tsipras was subjected to a similar tactic.

Prior to 2015, the German finance minister, Wolfgang Schäuble, and the troika leadership more generally, were keen to enlist a left-wing party for at least three important reasons.

The first was that they needed a pretext for burdening the Greek state with another vast loan. Given its permanent insolvency, and the expiration of the 2012 loan, the government needed either a new loan or debt relief. However, Schäuble and the troika had pledged to give Greece neither. Our government’s stated determination to fight for debt relief, instead of a third loan, would have forced Schäuble to claim that, while a third loan had been unnecessary, it became necessary due to Syriza’s economic mismanagement. Tsipras’ surrender thus liberated Schäuble from a conundrum of his own making.

The second reason was that Schäuble wanted to use a third loan to expropriate, on behalf of the creditors, all lucrative assets still in the possession of the Greek state. Having a left-wing, formerly anti-troika, government implement this stunning raid was the perfect legitimation.

Spain was the third motivation for the troika bending Mr Tsipras to their will. On the day the Greek government signed its surrender document in Brussels, Spain’s conservative prime minister Mariano Rajoy waved a piece of paper with Tsipras’ signature and, addressing his domestic audience, said: “This is what you get if you vote for Spain’s Syriza.” From that moment, Podemos’ steady decline to the point of political irrelevance began.

Mr Mitsotakis is the most fortunate incoming Greek prime minister of recent times, and he has the outgoing Syriza government to thank for it.

Last August, Mr Tsipras’ administration concluded the third bailout loan and, under the guise of an end to the bailout programme, entered into the fourth and longest agreement with the troika. The only real difference with previous loan agreements was that the fourth loan involved relatively little money upfront. The bulk of the financial assistance came in the form of deferrals as more than €100bn of repayments that the Greek state had to make between 2021 and 2030 were pushed beyond 2032 (with interest included, of course). In exchange, Mr Tsipras agreed to permanent austerity until 2060.

And there lies the paradox: while the state’s insolvency has deepened, the Mitsotakis government will be the first since the crisis that does not need to worry about meeting large repayments to creditors. Thus, Greece’s Tories are now, courtesy of Syriza, at liberty to build their regime as they please.

An inspection of the new government’s cast and programme shows that they are aiming for a Latvian solution to our permanent Great Depression: dealing with under-employment via the emigration of even more young people; subjecting the remaining workers to medieval terms and conditions; devastating small businesses whose market share will be taken over by troika-supported multinational oligopolies; using the banking system to launder dark money; surrendering public assets and the property of indebted households to assorted vultures; and leaving the state too impoverished to look after the weak but ever so generous to the strong.

As this naked class war will provoke considerable resistance, I expect the new government to turn viciously authoritarian. Already, New Democracy cadres warn of new draconian laws against dissent. The alliance of neoliberals and post-fascists entering Greek ministries will work together to violate basic civil liberties in the name of … economic liberalism.

The only ray of hope in this bleak landscape is the entry of MeRA25, DiEM25’s electoral wing in Greece, to parliament. Nine of us were elected, despite zero funding and a sustained campaign of character assassination against us by New Democracy and Mr Tsipras’ government.

Unlike Syriza’s MPs, who will lack all credibility in opposition, our MPs and activists will lead the resistance, inside and outside parliament, against the parasitic, cruel oligarchy that New Democracy will strive to erect upon the foundation of Mr Tsipras’ fourth bailout agreement. Together with our comrades across Europe, the UK and the world, we shall work for a Green New Deal to prevent apocalyptic climate change.

MeRA25’s share of the vote was a small number (3.4 per cent). But, along with the fabulous news that the Nazis of Golden Dawn have been evicted from parliament, that small number is large enough to make a crucial difference — just like a small candle whose light is capable of penetrating the darkness.

Yanis Varoufakis is the former Greek finance minister, the leader of DiEM25 and the author of books including Adults in the Room: My Battle with Europe’s Deep Establishment