Trump’s NAFTA Replacement Needs to Have Its Tires Kicked

We need a new trade agreement but one that will protect U.S. workers and families. The best way to do this is ensuring the rights of Mexican workers. Under the “new NAFTA” — the reality for both Mexican and U.S. workers would not be much changed. 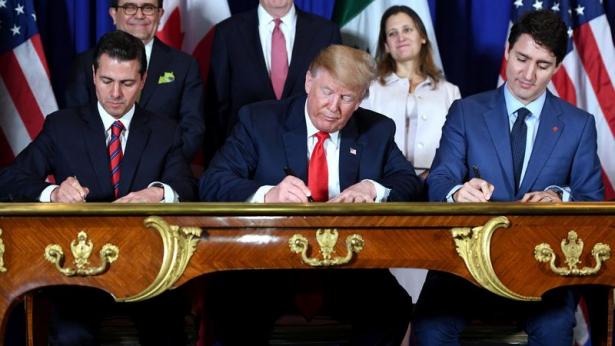 President Trump would like to see the United States-Mexico-Canada Agreement ratified without delay. It’s a bit like a used car salesperson giving you 10 minutes to accept the deal of the century. You may want to look under the hood and test-drive the vehicle first.

USMCA is largely an updated and rebranded version of the North American Free Trade Agreement passed in 1993. That deal contributed to what the economist Joseph Stiglitz views as a defining national problem: “stagnant or declining wages at the bottom, an eviscerated middle class, and top wages that are soaring.”

The central question now is, will the USMCA correct the flaws of NAFTA or lock them in for another quarter-century? Specifically, what impact will the new agreement have on U.S. jobs, wages and outsourcing to Mexico?

Merchandise trade soared sixfold under NAFTA from $101 billion in 1994 to over $615 billion last year. What is problematic, however, is the paradox that fueled much of this growth. Mexican workers have produced more and earned less, creating a lure for investment and a fierce downward pressure on U.S. wages.

We need a new trade agreement but one that will protect U.S. workers and families. The best way to do this is ensuring the rights of Mexican workers.

Why? Industrial wages in Mexico aren’t simply low, they are suppressed by few labor rights — workers cannot form independent unions — and government policy to throttle wages to attract investment. Despite high productivity, Mexican industrial wages now trail wages in China and are among the lowest in the world.

In a highly integrated economy, this dismal picture is also an American story. Not surprisingly General Motors put its fast-selling new Chevy Blazer SUV in Ramos Arizpe, Mexico, with labor costs at $3 an hour, rather than in Lordstown, Ohio, at $30 an hour. At these rates, the total annual compensation bill of wages and benefits for 3,000 hourly workers in Lordstown would be more than $360 million, compared with $30 million in Ramos Arizpe.

On March 6, the last Chevy Cruze rolled off the line in Lordstown. The sprawling Ohio plant that employed 4,500 workers three years ago now sits empty and the town is reeling. Dave Green, president of United Auto Workers Local 1112 in Lordstown, told me in March about divorces, depression, and parents unable to care for disabled children or their own elderly parents. In spite of the pain, he still took pride in the high-quality cars they built.

The auto sector accounts for about a third of Mexico’s manufacturing exports and reflects a highly distorted trading relationship. While the market remains in the U.S., production has migrated to Mexico. The U.S. ran a $95-billion auto trade deficit with Mexico in 2018 — more than the U.S. deficit with Japan and South Korea combined.

We need a new trade agreement but one that will protect U.S. workers and families. The best way to do this is ensuring the rights of Mexican workers. Two critical changes are needed before ratification: improved labor rights in the agreement and demonstrated labor rights reform in the export sector. Simply put, workers would actually have to be able to join independent unions and bargain collectively. The first change is important, the second fundamental.

Mexico has a new reform government genuinely committed to change. President Andrés Manuel López Obrador was elected in 2018 with an overwhelming majority. He already has passed impressive labor reform legislation, but the law has not yet been carried out. Fierce opposition to labor reform from well-financed old-guard unions and employers who profit from suppressed wages still rules the day, with state institutions too weak to implement far-reaching changes in the labor sector.

Whatever the relative merits on paper of the old NAFTA and the USMCA — in effect, the “new NAFTA” — the reality for both Mexican and U.S. workers would not be much changed, if at all, without labor reforms.

What we know from NAFTA is that any leverage evaporates once the trade deal is signed. That’s why it’s crucial that reforms to USMCA happen before ratification. This would not require tackling the entire economy immediately, but it would make it more likely that the new trade agreement will result in a more broadly shared prosperity.

[Harley Shaiken is a professor at UC Berkeley specializing in labor and globalization.]